First issue noted was this:

Ive set this parameter to 11 via code.

That aside the sensor is not returning anything back to openHAB.

When I stream events I’m getting nothing even though the green LED is showing its detecting movement. Also no temperature or light data is coming back.
Pushing settings to the sensor seems to be working.

As a test I’ve also got a TRV working on Z-Wave, that streams events and works with sitemap without any issues.

I’m just wondering if the binding for the trisensor is not ready for OH3.

Any ideas would be greatly appreciated.

Updated the firmware on the ZWA005. managed to connect 2 sensors, however i cannot get a further 2 sensors to work, They bind and when i press the action button i get an update message but nothing on movement, temperature or light.
Ive plugged the stick into a PC and ran Z-Wave PC controller and the sensor is sending back data and the stick is sending the data on to my PC. 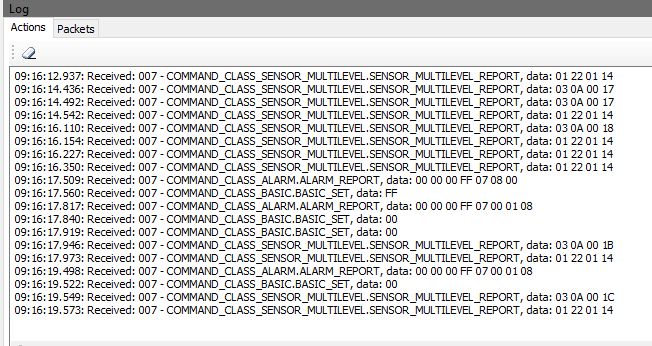 So I’m assuming its an issue with OH Z-Wave binding. it seems to be hit and miss.

When I stream events I’m getting nothing even though the green LED is showing its detecting movement. Also no temperature or light data is coming back.

I suggest to set motion sensor report mode to “0.”
And to set association group 1 to “controller”.

The recommendation is to configure the Things in the UI. Text configuration is too error-prone. In fact, since you did not use code fences, the spacing of your example may cayuse issues for users.

How to use code fences - Tutorials & Examples - openHAB Community

I found the UI very hit and miss. After about a day of resetting the sensor and re-binding I worked out what seems to be hanging the binding.

First of all, after the bind I go into the UI and scroll down to look at the wakeup interval, if that is zero then i know it wont work, if its something like 27960 then it works.

So if its zero I change to 27960 and ctrl+S, sometimes it comes up with pending, sometimes not. sometimes it still reads zero after refresh or UI restart.

I keep trying to save the value until it gets accepted.

After this I can then change anything fine. Following this ive gone from 4+ attempts to bind correctly and work, to a successful bind every time.

I’ve never had consecutive node numbers before with these sensors due to having to delete and start again. Now (for the first time ever) I have 7 consecutive sensors:

I set the lifeline to controller.

For most modern devices the binding figures this out automatically. I have never had to set it manually.

sometimes it still reads zero after refresh or UI restart.

I would certainly expect this to be the case. For the configuration to actually be transferred to the device, you must wake the device up. If it was set to 0, this means that the device is not waking up automatically, so you absolutely must do this manually, otherwise it won’t work.

It does sometimes, however I’ve had plenty of instances where it does not show as set in the UI. Admittedly I did not check the code, I just kept saving and waking the device with the button ‘B’

I also looked at power and replaced the battery with a buck set to 3.5v to ensure the sensor was getting enough power. Also the sensor was within 2 feet of the Z-stick.

On the ‘wake interval’ @ zero value, very occasionally the IU would warn that the minimum value is 1800 (if I remember the value correctly) and would not let you save. You try to change to 1800 and as soon as you save it went back to zero!

Hey Volker,
i have ma ZWA005 for quite a year, now (with your configuration) its the first time I see values! I don’t know which one of the parameters wasthe cruical point, but now its just working.
Thanks a LOT!
Text-configuration forever!
Greets
Simon

I can also confirm that setting the controller as lifeline is necessary.
BUT - since this is a battery device, before it gets properly initialised it needs to be woken up correctly several times. I managed to do this by pressing the action button once briefly, several times over a period of times, after setting the wakeup period and lifeline like described above. It did NOT work waking the device by holding the button for a couple of seconds so the LED turned red or yellow.

Thanks to John Barnes for the thread!

Hello,
I’m configuring these settings to controller, but it’s showing as pending. The sensor is online, but not reporting any values.

image819×361 29.7 KB
All is shown as NULL, and in the logs nothing appears as an event when I move in front of the sensor, no LED comes on on the sensor either 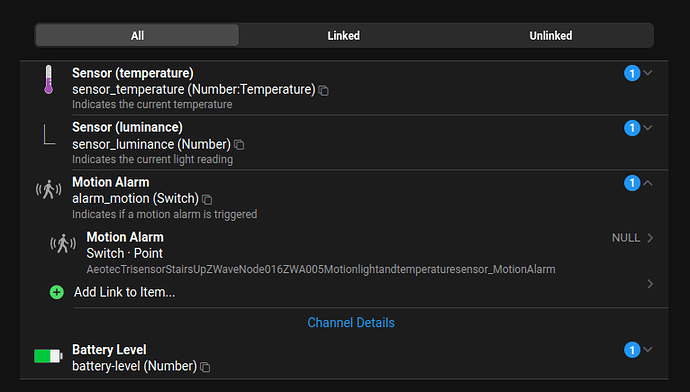 This looks like it could be the same issue I experienced, I can’t tell from the screen shots posted if the settings have been accepted correctly so can’t 100% say if it is the same issue.
Normal result post bind was ‘pending’ notifications and Null values even after force waking the sensor)
Also my issue was a year ago and I’ve not added any further ZWA005 sensors to my system since.

During the process keep waking the sensor by using Button ‘B’ on the sensor as per sensor wake instructions.

Using this method is a bit laborious but I managed to include 7 sensors in a row without having to un-bind and re-bind lots of time until it worked.

These have been running for a year with little issue controlling lights and security so its worth the messing. I’ve also permanently powered all my Z-Wave equipment so its been fit and forget.

That helps a lot John, thanks. The key is pressing the button so that the settings are properly saved.
I’ve managed to configure as you said, but now only the values for temperature and luminance are reported:

On the UI, the motion sensor has gone from NULL to Alarm though:

I’ve tried to play with the settings below but can’t seem to get the motion alarm to show up in the logs: 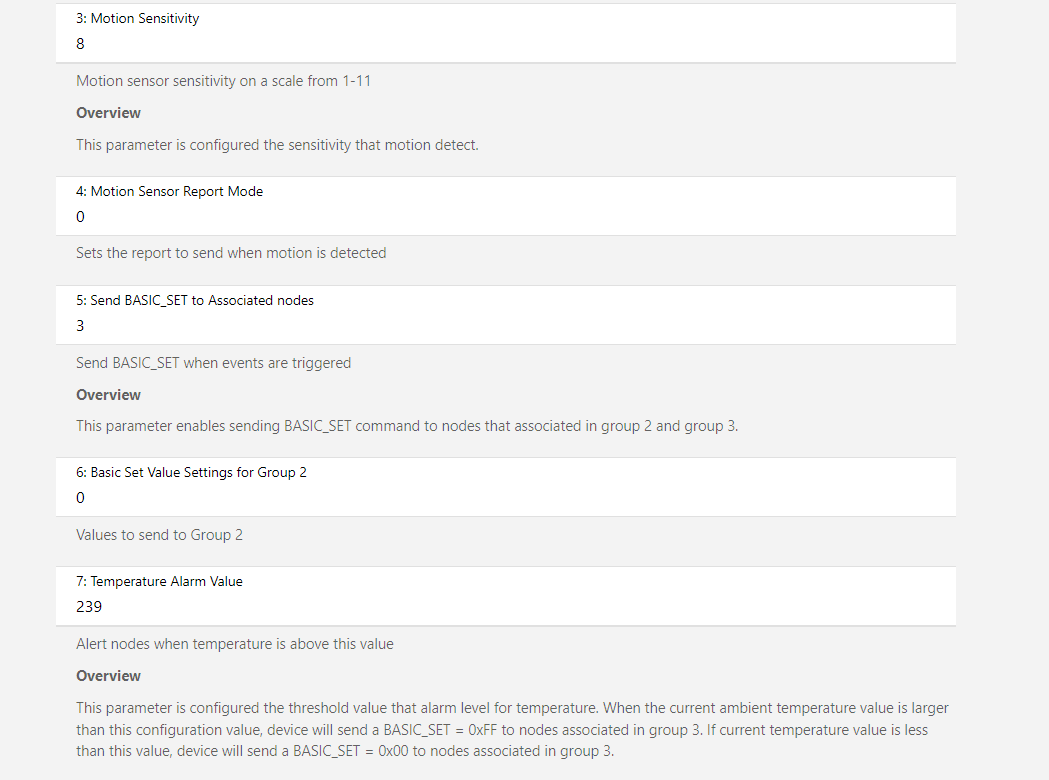 In the association groups, there is one for Motion Alarm also, which I was able to set to Controller, but same result.

Thanks, and Happy New Year mate!

No Problem and Happy New Year to you.

The switch its latching ‘on’ you will probably need an expire timer on the switch.

First my setup:
I only have Lifeline associated group set.

Code is probably easier to see.
Just in case you didn’t know, to understand the code and how it links to the UI:
Example 'config_2_2: 240 is the same setting in the UI:

This is for one of my sensors: 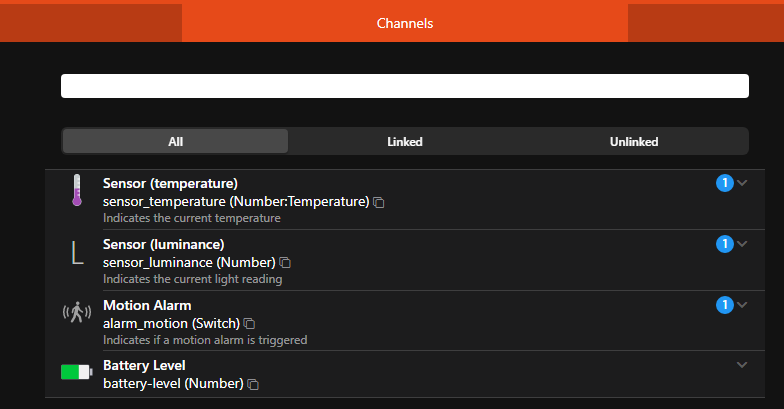 Motion Channel (OK changes to Alarm when triggered then back to OK): 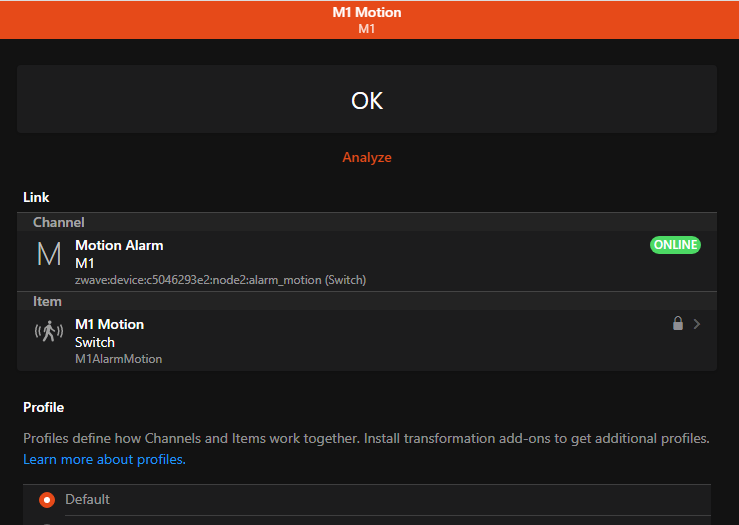 Just check the above but I think its down to the not having an expire timer on the switch. 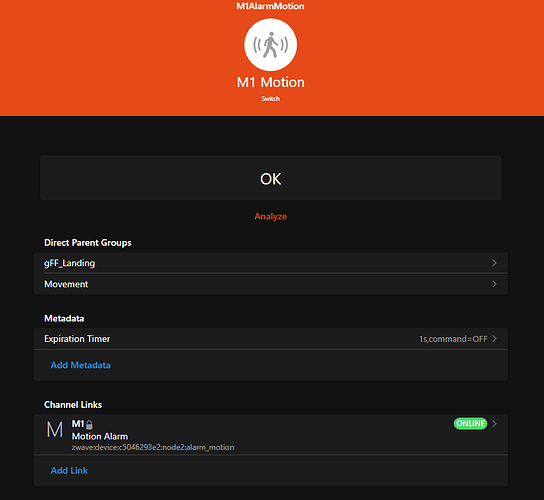 Great! Got it working with your help! Thanks