I created a rule that triggers on a specific day of the week but when testing found that the trigger did not work. So I created a pair of rules (one to switch a device ON and another to switch it back OFF a minute later) which which have triggers for each day of the week, with each trigger having a different time. In the UI the ON rule shows as: 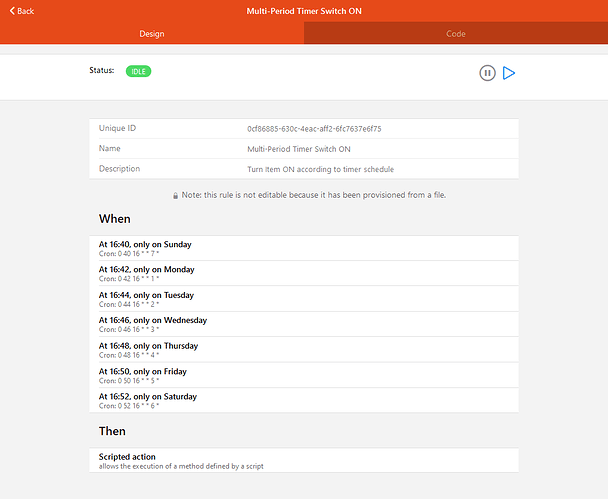 Today being Thursday, which the machine running the rule confirms via the date cmd, I would expect the ON rule to have triggered at 16:48 and the OFF rule at 16:49 however the log shows that they triggered at 16:50 and 16:51 respectively, that is the time one would expect if it were Friday.

image1233×317 12.2 KB
So unless I’ve done something stupid, which of course is possible, it would appear that the Cron is triggering on the wrong day. Is this a known issue, if so is there a workaround?
Cron builder bugs for OH 3 rule triggers
rlkoshak (Rich Koshak) February 4, 2021, 5:23pm #2

Don’t post screen shots of code and logs. Post the actual text. Screen shots are almost impossible to read, can’t be searched, and are generally not complete. Use code fences to preserve formatting.

I think there is a bug in the ui because 1 should be Sunday and the ui sets Monday to 1. The fix here is to just set it to the correct number or use the abbreviation of the day, like SUN.

Here is the “code” and log within code fences as suggested:

The script actions, which run as expected just on the wrong day are:

I didn’t post them originally since, as far as I can see, there is no reason to believe that they have any relevance to the issue. The issue being that as the first screen shot shows the rule provides a list of Cron triggers and when they will run, both in Human Readable and Cron Format, but as the log shows even though it is Thursday it is the Friday trigger that fires.

I agree that is a work around however not a particualarly good one as the UI will be providing misleading information.

@hilbrand I agree I think there is a bug, and it is probably because of the day to number translation. But I believe that Monday should be 1. The reason I say this is that:

I did originally try using the day abbreviation of the form ‘Sun’ rather than ‘SUN’ and the Cron trigger creation failed which is why I went to using the numbers. I have now just tried the upper case version ‘SUN’ and it is now working properly

Many thanks for the pointer.

Although that said the Quartz Tutorial that the OH documentation links to states 1=Sunday.

The implementation in openHAB used the quartz library in the past. This would explain why it has Sunday as 1. I guess it’s probably to late to change it to use Monday as 1 as that could break lots of cronjobs. So I would suggest we should change the UI.

At rule trigger "Time based", Day-of-Week field seems to be interpreted incorrectly
Birchcroft (Birchcroft) February 10, 2021, 8:49am #6

Based on your original post I’ve moved to using day name abbriviations in caps (i.e. SUN MON TUE WED THU FRI SAT), rather than mixed case (i.e. Sun Mon etc) which is what I used originally, and the timer works as expected.