Okay - been rebuilding my OH2 openhabianpi into a OH3 system the past few days and been pulling my hair out over an issue. With the new OH3 build, I’m trying to put everything in place within the Main UI as I rebuild it, but one item doesn’t seem to be taking hold. When I add my Insteon dimmers to HomeKit, they exhibit the annoying behavior of going to 100% prior to any dimming action, so I’ve attempted to add the [dimmerMode=“filterOn”] to the metadata using the CODE area of the UI to prevent this, but it doesn’t seem to be picking it up with any variation of edits I’ve attempted. My old installation used InsteonPLM and homebridge and didn’t exhibit this behavior so this was a new need for me.

Just to test, I manually mapped the same device into a .items file and was able to add the filterOn flag and it stopped the 100% pop immediately.

Has anyone else experienced this? I really don’t want to go back to all file based since I’ve built everything up in the UI already and this seems to be the last hiccup. I did search a TON and solved a number of other issues with my change from 2.5 to 3.0, but haven’t conquered this one.

Any help would be greatly appreciated.

mekit binding had the issue

I did see your response in another thread and tried that with each change. I sent this late and didn’t put all my troubleshooting in the post. Tried documenting this with more images but restricted right now.

When I add the homekit metadata and either only select the Lighting, Lighting.OnState, and Lighting.Brightness from the list (or type them into code) I get a normal HK dimmer item with 0%-100% slider selection 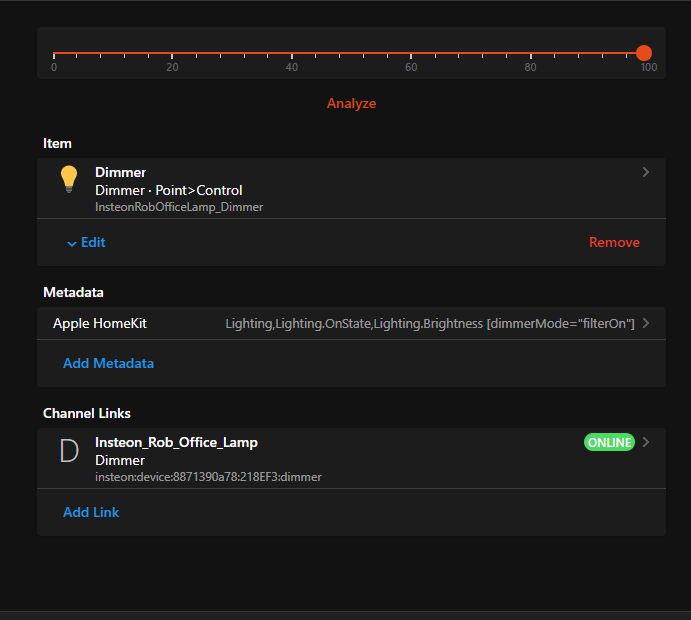 to include the [dimmerMode=“filterOn”], the HK item still shows up but has now become a toggle switch (on/off only)

So maybe I’m simply putting the tag in the wrong place? On the medadata code area I’m using:

Additionally - If I attempt to move the dimmerMode into the config {} area and save, it removes it - this has been verified when I open the code screen back up and also in the items.Metadata.json.

Okay - so it was me trying to tag it incorrectly. With a ton of searching and debugging, found enough examples to get it to work.

For any users having similar problems going forward, the correct way to build the code in the Metadata is:

The YAML editor just has to recognize it correctly to save. Even if you put it in incorrectly, it wouldn’t show a save, but WOULD propagate over to the metadata when doing an “openhab.metadata list” in the console.