OH3, triggeringItem, groups with aggregation, and "Member of" rules that don't also include the aggregated group

I’m attempting to build a rule in the OH3 UI which uses triggeringItem to send a notification. I see that this was deprecated in OH3 for all but “Member of” triggers. This is fine, I created a group for the items, set my trigger accordingly, and all is well.

Is there a way to have aggregation on a group, but have the group’s state changes be ignored by a “Member of” trigger, so that the rule only runs on the member item?

I think a workaround would be to have two groups, one that reports the aggregate for human consumption, and one which isn’t aggregated for the rule triggers, but I’m wondering if anyone is aware of a more elegant solution.

I notice that if I include an aggregation on the group, then the group and the member item both trigger the rule.

That should not happen, but do show us the rule trigger(s) in question.

Thanks for taking a look! It seemed unusual to me, but I’m also not familiar with the inner workings of triggeringItem.

I’m using the UI to write the rules. Basically it’s a rule that watches a few groups for a change and sends a Pushover notification.

The Action is an extremely simple script:

The odd thing is that when a group has its “Aggregation Function” configured I receive two notifications, one for the item and one for the group. When it is removed, I only received a notification for the item. My theory, given the simplicity of the script, is that the Action is somehow running twice? 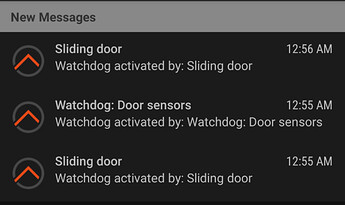 Is there anything else I can provide?

The messages shown don’t correspond to the rule shown - “Activated” vs. “activated” - maybe you have more than one rule working here.

Apart from that, I would suspect you have the made the Group a member of itself.

Sigh. Yes. The group that I was setting Aggregation on was nested inside the group I was watching.

Definitely user error in configuring the rule. Thanks for the help!