This topic can be used to discuss problems/experiences/questions on the openHAB 3.0 Milestone 2 - see details at https://github.com/openhab/openhab-distro/releases/tag/3.0.0.M2.

to be sure I run and tried all the other tricks from Stackoverflow:

Some highlights on the frontend side for this release:

You can now use the UI to write “scripts”, which are rules that don’t have any triggers or conditions but a simple script action to execute your own code. When you create a script you’re just asked for an ID, label, description, and the language you prefer: 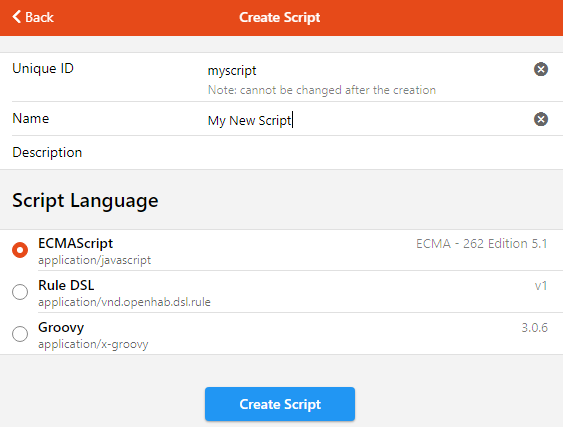 openHAB has support for ECMAScript (aka. JavaScript) and its Rule DSL by default but you can now add more languages by installing automation add-ons - a new add-on category; Groovy is the first language you can install but I’m sure there will be more.

The Settings menu has been modified a bit to carve out the automation-related menu entries into a new “Automation” group. 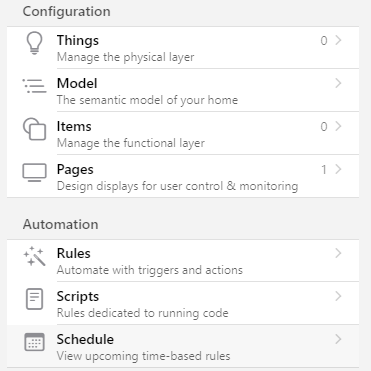 When you’re editing a Script (or an inline Script of a rule condition or action) you have several keyboard shortcuts that you can use:

You might see more options in that Automation area in the future, like Scenes - just set the desired items to the state you want and easily reset these items to these predefined states in bulk - it will still be a rule but with a separate UI to configure it.

openHAB 3.0.0.M2 has experimental support for Blockly as an alternative way to write your JavaScript script conditions and actions in rules (and now standalone “Scripts”) that you edit via the UI.

There are a number of limitations:

There are only a few blocks in the openHAB category currently to interact with your system, so it’s quite limited - but in many cases reading and writing items will be enough at least for now! 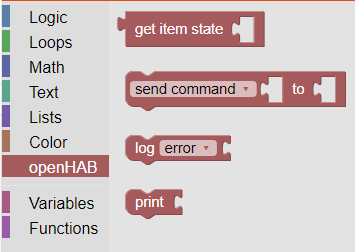 It’s bound to be expanded, but there are only so many hours in a day. I can imagine being able to call thing actions or making HTTP requests, and more, and there is much to do in that area - if you’re willing to contribute new blocks, and can understand a little JavaScript, please step up, contributors especially in that area would be appreciated! I’ll be glad to assist you in how to write them.

Many of the Code views you see throughout the UI now have “smart” autocompletion to help you write your code - whether it’s Things (a new way of configuring them in the UI), rules, pages or widgets, you can hit Ctrl-Space on your keyboard and chances are, you will get some hints: 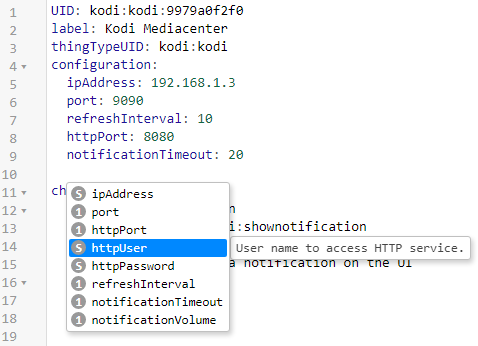 It’s not perfect, and there are still ongoing issues with it, but overall it works pretty well and will help you configure stuff way easier when you choose to edit a little bit of YAML instead of clicking through the UI - just hit Ctrl-Space when in doubt and you might get the insight you need.

By the way - previously the errors in a YAML code editor would be displayed in an area below which would take a lot of screen real estate; now the errors are shown with wavy underlines and tooltips: 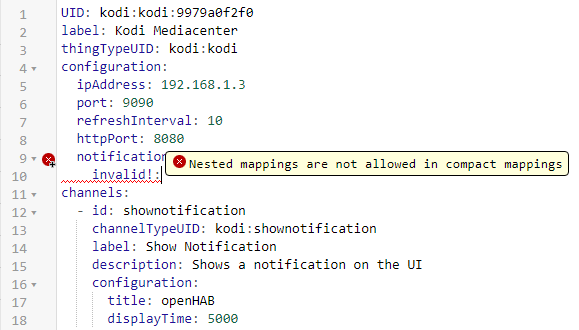 Using variables and expressions has been expanded to sub-properties, like classes or CSS attributes, and there are now “input” widgets in the System, Standard (standalone), System (list item) libraries that can be used to receive text, numbers, dates and the like. For example have a look at the Keypad widget as a first example of what these facilities combined together can do:

This is the first submission of a widget for the openHAB 3 main UI. For now you can define them by going to Developer Tools > Widgets, creating a new one, and copy-pasting the code below. This widget will allow users to enter a numerical (plus * and #) PIN code and send a command with the result to a predefined item when pressing the Send button. [image] The widget code: uid: keypad tags: [] props: parameters: - context: item description: Item to send the pincode to label: …

@RGroll is also making a Weather widget that you’ll want to check out too:

This is another widget for the openHAB 3 main UI. But a bit different and sadly more complicated to set up than the awesome keypad-widget, which @ysc posted earlier today. But, first things first - what does this do?! This widget shows (suprise!

) the current weather (+temparature, humidity & wind) and a (current) maximum of 3-day-forecasts in a ‘fancy’ way. Its heavily inspired by some weather UI images found on the internet. You need to have a weather-binding installed, which…

There are a lot of other improvements, check them out here!
Hope you like this release - next one will likely focus on giving you a nice home page!

Thumbs up for blockly. I’m sure this can be used as intermediate step, when basic rules are not enough but you’re not able (or just too lazy) to develop a script.

Yes this is untested beta software and no I don’t rely on it to be working. Someone has to test

In the past I’ve noticed that when running an Action Script directly (e.g. by triggering a Rule using the play button or running the rule from another rule) that some things are missing from the context. The mode impactful missing thing is access to the Actions. For example:

This run just fine when the rule i triggered by an Item event. But if it’s triggered by pressing play or triggering it from another rule I get a Class not found exception on org.openhab.core.model.script.actions.Log.

Is this also the case with these scripts? If so it’s a pretty significant limitation and need to be mentioned. If not than “woohoo!”

@denominator There is an open issue on this. My finding ist that this error only occurs if OH3 is running when trying to upgrade. If oh3 is stopped the upgrade process works fine.

Good point, we had missed to tag that PR with the milestone when merging. I have added it manually to the release notes now.
@Lolodomo May I ask you in return to do a small PR to fix the table in the docs? Thanks

I noticed the Z-Wave Thing documentation there is not current. We just checked and the new documentation is in the binding repo. The old docs reference the old database site.

Is this also the case with these scripts? If so it’s a pretty significant limitation and need to be mentioned.

Yes, unfortunately - they are just rules so they suffer from the same problems. This is probably fixable and should be addressed. The “log” block in Blockly is translated to code that instantiates what you call a “native logger” (from org.slf4j.LoggerFactory, which works) in openHAB 3.0 my getting started notes: Rules - by the way, your notes were helpful as a reference.

Hello,
first of all, thank you for that awesome Milestone! It’s fantastic. I am playing around with the new version and have one question. Is it or will it be possible to import existing thing and item files?

Thank you for your work and help! 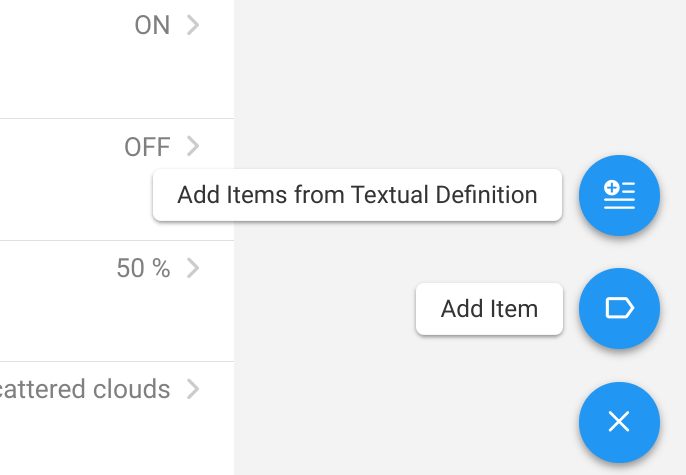 After clicking the + icon on the Items page select “Add Items from Textual Definition” and you can paste the contents of a .items file there and it will load them into JSONDB. NOTE: You then will need to remove the .items file. You don’t want OH to have the same Item defined in both places.

There is no equivalent for .things files (yet?). But for that case you would probably want to rediscover the Things anyway.

You can keep on using the .things files you already have. Support for .things and .items files don’t go away.

Thank you Rich, I know it, but I thought that a managment in the internal database is better.
An other question is, how can I take a look with frontail in the oh log?

how can I take a look with frontail in the oh log?

Install openHABian or install and configure Frontail manually and then point your browser to where Frontail is running. Frontail isn’t actually a part of openHAB. It’s a separate service.

One thing you could try is request http://oh2:8080/rest/things on your openHAB 2 instance. This will dump every thing in JSON format. It’s ugly but you can pretty-print it for instance with https://jsonformatter.org/json-pretty-print, so you can identify individual things more easily - it’s an array of objects like

You have to extract every one of those objects, and in OH3 you can go to Developer Tools (on the left), API Explorer, expand “things” then the green “POST /things” entry. On the right click on Try it out, and paste the things you extracted from above under “thing data”, overwriting the example. Then click on the Execute button. This should add the thing to the internal DB.
I’m not guaranteeing this will work 100% but you can try with one thing and see how it goes.
If you know a scripting language like Python it wouldn’t even be too hard to write a program with a simple loop to do all this for you.

There is no equivalent for .things files (yet?).

The .things syntax is a little more convoluted than the .items syntax (it’s also far less documented) so writing a Nearley grammar for it so to parse them into JS objects is even more of an headache. It’s also not a flat list, there are blocks and so on. For reference the grammar for the .items syntax is here: https://github.com/openhab/openhab-webui/blob/master/bundles/org.openhab.ui/web/src/assets/items-lexer.nearley. There’s also one for sitemaps here: https://github.com/openhab/openhab-webui/blob/master/bundles/org.openhab.ui/web/src/assets/sitemap-lexer.nearley
If anyone wants to give it a shot, though, that would be awesome

Since Blockly is integrated… will NodeRed also be part of OH3 in the future?