I´m ussing Raspberry Pi (old version) then I follow the instruction and the runtime is woking fine, I have the demo and is working then I try to open Designer but nothing happens, I copy and rename the .cfg file, still nothing happend.
Thanks in advance

You need to perform step 3 in “Installing the openHAB designer (optional)” on this “Getting Started” page:
http://www.openhab.org/getting-started/index.html 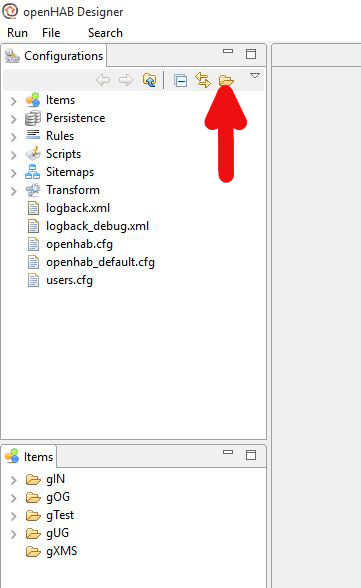 This almost looks like a corrupted file … I would try to download the designer again and reinstall it.

just a question. I have tried to follow to “designer guide” but still when i start the designer and tro to open the config folder, its says that the folder is not right and I have to find the right one… anyone who can help me… im just testing right now, so everything is running on windows

Most common problem is, you need to have the openhab_default.cfg file in place, not only your individual openhab.cfg.
Then in designer open your folder /etc/openhab and it should work.

OpenHab designer does not detect configurations folter
Getting designer to work with my folder on a mac
lindberg (Peter Lindberg) January 7, 2016, 5:52pm #7

Perfect… it worked… thanks

Hi, I’ve downloaded the 64-bit and the 32-bit version, and both versions of the new 1.8.0 release. All versions resulting in the same error: Syntax error: “(” unexpected.

I’ve also tried the Oracle 8 JDK now instead of the OpenJDK. Also without success and the same result. Does somebody have any suggestions?

Sorry, not me, I’m using Designer on Windows, not on Ubuntu.

Hi, I’m having what I think is a similar issue.

I’ve manually installed everything on my mac running 10.9.5.

I created the files structure \opt\openhab.

Designer doesn’t recognize it as a valid folder.

If you need additional information let me know. Thanks in advance of any and all help.

Designer doesn’t recognize it as a valid folder.[/quote]

You need to open your configuration folder, not the openhab folder itself.

Never got the designer to work because of the annoying syntax error. Configured openhab manually by editing text files. Next obstacle was changing the color of my Aeon Labs Light Bulb. Isn’t possible in openhab 1. So I removed everything and installed openhab 2, manually. It runs in a terminal session. Now I want to install it as a service using the command openhab:install-service. Starting the runtime now results in the same darn syntax error: Syntax error: “(” unexpected.

Who can please help me getting rid of these show stopping syntax errors?! It takes away all my pleasure in experimenting with openhab. And I’m seriously thinking of moving back to Domoticz because I’m not a java expert (yet).

In another thread you mention your are on ODROID Hardware.
Maybe you should open a new topic with a more specific header, something like “Not able to install OH2 on Odroid as a service”.
Only a few people here are on a Odroid and in this way you can better get their attention.

Good luck, don’t give up, most people love OH

Thanks! I already played with these thoughts as I wrote it down. I will open a new thread and ask some relevant questions there.

I tried installing the designer on Ubuntu last night, and after updating the ini file with the following it started working
-Dorg.eclipse.swt.browser.DefaultType=mozilla to openHAB-Designer.ini

However, whenever I attempt to connect to my openhab.cfg file, it tells me that it can’t use it because of
Cannot create linked resrouce '/config/config'. The parent resource is not accessible
Both the openhab.cfg and openhab_default.cfg are in the same folder, but it should be noted that both are under /etc/ and not /opt/ as indicated in the manual install instructions

The items from my item config are showing up as expected.

I should note that I used the apt-get install method, not the manual method. If that’s the source of my headaches, then I can move to manual and remove the openHAB apt-get package.

I installed the designer as explained in getting started on my raspberry pi (model A) in a separate folder at the /opt/-folder.
When trying to start openhab-designer it looks like its not there!?

this seems a siple problem but don’t know where to look.

other question: can I run openhab designer on my laptop while the raspberry is hosting the openhab runtime/addons

other question: can I run openhab designer on my laptop while the raspberry is hosting the openhab runtime/addons

Yes, you need to setup a samba share, take a look here:

Using openHAB designer on Windows with openHAB on Linux IDE/Build

I just installed openHAB 1.7 on a Beagle Bone Black running Ubuntu 14.04. I tried the demo and it works fine. I tried to edit the items and sitemap files with vi and ran into problems. I needed openHAB designer but there is not much space left on the Beagle Bone Black SSD so I figured that I could install the Windows version and select a configuration folder over the network. I tried selecting /etc/openhab and got "The chosen directory is not a valid openHAB configuration directory.". I trie…

I installed the designer as explained in getting started on my raspberry pi (model A) in a separate folder at the /opt/-folder.

I don’t think that is a good solution: the Pi model A has, what I have read, not enough cpu power to run openhab designer … but I have never tried it …

ok thx, will try tomorrow, will post feedback on that cpu power