I have struggled a bit to get my Dooya Blind motors to work with Openhab2 so I thought I should put together a small tutorial to show how it is done. Most of the information below is gathered from the forum, so thanks to everyone that have contributed. I have tested this setup with the Dooya DM25LE battery powered blind motor, and another Dooya battery powered motor I don’t know the model number of, as it came assembled in the blind. I don’t know if this will work for every model they make, but it worked for the two I have.

Step1 - Mate Rfxcom as a remote. 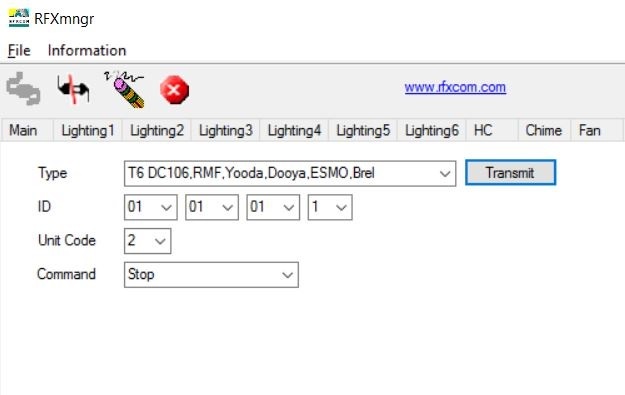 Step2 - Convert the id and unit codes to decimal

Combine id4 and unit number,1 and 2 to hexadecimal 12, use the table at http://www.vlsm-calc.net/decbinhex.php to convert this into decimal, in this case 18.

Step 3 – Add the blind as a thing in OpenHab2 using Paper.

Press the + button to add a new thing, choose the Rfxcom binding, then add manually and choose the RFXCOM Blinds1 Actuator. Select your Rfxcom as the bridge.
Set the Sub Type to DC106/Rohrmotor24-RMF/Yooda

I was unable to get this to work with a Dooya DT82TV Curtain motor, however, an alternative method did work.

Step 2 - Don’t convert, look at the output from RFXmgr:

I hope there is a other way to control dooya. With a CUL or a SignalDuino.

in FHEM it works with a SignalDuino.

Hi, i use Dooya motors in my Roller shutters.
To control it i use RFLink firmware and serial binding.
My Dooya motor in RFLink discovered as BrelMotor.