@ThomDietrich I like the new layout, especially when submenus starts to get bigger it would have been to large for only one main menu!

How is the work going on adding dmx and miflora to submenu 20?

Thanks for the very quick response @ThomDietrich.

Maybe changing the menu option from “Go through all openHABian setup steps manually” to read something like “OpenHAB & Supporting Tools installation” might help?

Great job on the menu, thanks for your input.

I often find it easier for users if it is just marked in the title.

The PineA64 build was broken and I had to create a pull request upstream after two hours of sorting it out. It’s late now and I’ve plans for tomorrow. Release announcement probably on Wednesday, let’s see.

@Idus I’ve updated the documentation per your suggestion.

@Idus there are two problems with your question: 1. The openHABian configurator is downloaded from the internet on first boot, that’s not possible without either WiFi or Ethernet… besides how would one even control the device without any network connection? (display+mouse are not an option for me ;))

@clearwater thanks for reporting. I’ve added a hint that (some) dongles might do the job to the documentation. I’ve also added double-quotes to both documentation and openhabian.conf.

@mark_cornhill @Idus the submenus should be clear now.

@Idus I’ve updated the documentation per your suggestion.

@Idus there are two problems with your question: 1. The openHABian configurator is downloaded from the internet on first boot, that’s not possible without either WiFi or Ethernet… besides how would one even control the device without any network connection? (display+mouse are not an option for me ;))

A few months have passed and it’s time for a new official version of the openHABian scripts and images.
openHABian v1.3 packs many small changes and improvements in both the base images and the openHABian configuration tool.

All git commits can be found here.

Please check the commit history and the documentation for more details.

In the past couple of weeks two problems arose you SHOULD be aware of.

What to do:
Please update the openHABian configuration tool (on SSH console type sudo openhabian-config, then select “Update”). Afterwards warning messages will show up automatically if you are affected by one of these issues.
Follow along the instructions give.

New setups are not affected.

As always for existing setups there is no need to install openHABian anew. To be up to date you should however update openHABian and execute the “Upgrade” option. Next you can go through the menu and execute interesting options as you wish.

The menu of the openHABian configuration tool was growing out of its size. With it’s new submenus and sections for specific topics it’s now ready for new additions, platforms and further optional components.

openHABian v1.3 includes many more changes and improvements. Learn about them in the changes log above and the documentation article.

Feel free to update your system, Install the image or try a manual setup.

I just installed it and it works fine ! 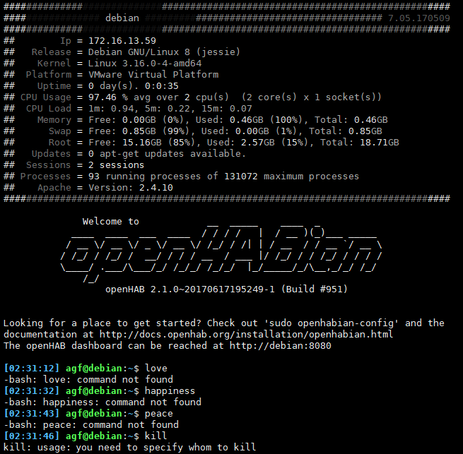 any idea how to fix that?

The warning you are seeing should read as follows:

Please find all details regarding the issue and the resolution of it at: https://github.com/openhab/openhabian/issues/147

In short: I would recommend to backup your files and install a fresh openHABian v1.3 system.

systemctl is not able to interact with your system, that’s related to some other issue I can’t diagnose easily but it will work with the new setup.

as it took me week to get my serial device running i’m not going to make a fresh install…
so i’m basically stuck with the old version and that’s it?

is there any known issue regarding upgrading the underlying Raspbian from Jessie (8) to Stretch (9)?

If not, i would try to upgrade my RPi next weekend.

have you tried to use another Java?

So it seems that the serial port is not hassle-free.

i got the 32 bit version running;
Topic: 64 bit arm serial

At the moment i’ve made it working with the following commands:

And after a restart i could use the RFXcom.

i think we need to make a clear doc/tutorial for this.

If you put it like this… yes.
It took you weeks to get all serial devices working but shouldn’t it be easier now? You could just document/copy all relevant changes and apply them to the new system. In general I would say that the raspbian system is way better in regards to serial, gpios etc. You could try with a second sd card - if it doesn’t work after one hour you can just go back.

@RWest your instructions are specific for the Pine64 and the restriction to use the armhf packages.

@goebelmeier I did not try this yet. Looking at the changes we can possibly expect problems with apt and the serial and network specific options of the openHABian Configuration Tool. I’d be interested to hear about your findings!

ok, i found a empty (= unused) sa card. so i flash the new image and copy all of my userdata and conf shares of my existing setup to the new one and everything should be working or do i have to set up bindings confs etc. again?

… well that depends on what you restored from the old system. If you restored the openHAB internal database your binding config will be there, if you just restored *.rules files etc., you will need to install and configure bindings anew via Paper UI. It all boils down to: Just check your system for the current state, I can’t tell you this.

Hello @ThomDietrich Thank you so much for your setup! I’m a super newbie so please excuse ignorance if this should be obvious.

Anyway, I kept getting errors when trying to start up my Raspberry Pi 2 with the Openhabian image – it just kept starting over and over.

Eventually, I looked at some manual things and finally got Openhab2 to install correctly and I’m seeing the user interface and everything on my web browser. That’s the good news.

The problem is that every time the Pi reboots, it tries to do the Openhabian set up again (and continues to fail). Is there a way to delete or de-activate the part of the Openhabian install that starts automatically on boot?

my operating sd card runs with “openHABian Configuration Tool [master]v1.2-279(e7e1cf2)”,
i can backup anything i need to as i can switch between the two setups. i’d like to take the whole conf if that’s possible.
just tell me which folders to copy/paste =)
i have the three smb shares openHAB-conf -sys and -userdata. would that be enough or is there more to it?

once again, Kudos for that excellent work ! With the latest updated and the inclusion of MQTT and Node Red this is just an outstanding project.

One thing I noticed is, that when I am swapping the SD Card from an RPI2 to an RPI3 and updating the kernel, the system no longer does any kind of reboot (neither “sudo reboot” nor “sudo shutdown -r now”). It just goes black.
Back in the RPI2 everything is fine.

Any ideas ? According to the official RPI sites, this move should work flawless…

hi , first check ur current ip address and check RPI ssh status is on of off