Hi everyone! I have installed the latest openhabian image on my RPI 3 (openhabianpi-ua-netinst-20170218-git11d8ebc.img). Afterwards I tried to put a binding into addons folder via samba network share (\OPENHABIANPI\openHAB-sys\addons), but it tells me that I don’t have to required permissions to do this.

Can anyone help me?

Thanks @ThomDietrich and @jaydee73 much better now. Goes to show a lot can change around here in a couple of weeks when you’re not actively tinkering!

For anyone having problems getting WiFi to work, make sure you only use a 2.4GHz SSID, and not a 5GHz one. Took me a while to figure this one out.

Goes to show a lot can change around here in a couple of weeks when you’re not actively tinkering!

With the latest build of openhabian it is not possible to update to the latest kernel (rpi-update)
Is this a bug, that is already known?

I can confirm this. For rpi-update a package (binutils) needs now to be installed first. However when I did and ran rpi-update, the update bricked my installation (Pi3)…

Hi @ThomDietrich
With my RPi3 I did a new openhabian 1.1 installation last week.
Today I tried to continue with setting up my raZberry board.

Now I also have the problem like @sptzdmnc and @syrenius

Is there a solution for this problem?

In the meantime I have also tried what @anfaenger has desacribed on a Raspberry Pi 2 to get a Razberry board running (fresh install). Exactly the same result.
If I do not do rpi-update, only the prepare serial dialog within openhabian-config, I am constantly getting a
OFFLINE - COMMUNICATION_ERROR Serial Error: Port /dev/ttyAMA0 does not exist
in PaperUI…

@sptzdmnc @syrenius @anfaenger thanks for reporting this issue. This is a major problem we’ll have to deal with quickly.

This should stop others from running into problems till the issue is solved. Executing rpi-update should not be NEEDED, I’ve just recommended it till now because it’s a good practice. @syrenius your success shouldn’t depend on it.

I’ve opened an issue to investigate the actual problem, till then everyone should refrain from using rpi-update!

Executing rpi-update should not be NEEDED

@ThomDietrich Just a question to prefend wasting time. Is it ok, when I do the following steps?

(just wanted to point to Basic Setup) Yes that should be it. 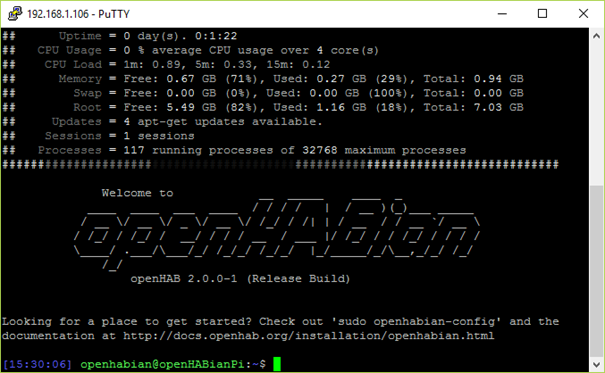 -.- Sorry, that’s the price for a hotfix

Done and it’s okay now. After I prepared the Serial Port and rebooted, a login was possible!

Now I can go on with setting up my system.
That’s the advantage of getting hotfixes.

Can we provide an openhab2 folder inside of /opt/ with symlinks to the oh2-folders?
This would make it really easy to find all the files and would even allow easy sync to cloud services.

Sure, would be possible.
Could you describe the use case(s) shortly?