"openHABianDevice" too long for Windows

In case you do a clean openHAB 3 install and want to access Pi’s file system from a Windows PC:
the name openHABianDevice is too long for Netbios (max. 15 characters allowed) - you need to enter

in your file explorer or change Pi’s hostname.

Just for completeness - add this to your /etc/samba/smb.conf

Thanks for passing the tip. I’ve moved it to the solutions category where it should be easier for users to find.

Which Windows version does this apply to ?

The limitation is not OS-specific it is a Netbios limitation.
To be precise Netbios limits hostnames to 16 characters where Microsoft only uses 15. The 16th character is reserved for accessing services.

interesting but my question is which Windows version this applies to ?
Who needs to apply this ?

I cannot reproduce your problem with a fresh openHABian install and a Win 10 client.
openHABian installs the most current Samba (4.9.5 I think) and does not set any of the parameters you have suggested to set.
SMBv1 is disabled anyway, that’s what Samba does since 4.11 hence little point in setting client min protocol = SMB2.
And client max protocol = SMB3 shouldn’t be needed either as SMB4 isn’t using Netbios, is it.

EDIT: note the missing “e” at the end

normally you would enter \\openhabiandevice into Windows’ file explorer’s bar.
this does not work

I just installed openHABian and also didn’t have a problem with the default hostname.

whether it’s worth to change the default hostname

no, it is not worth. I just wanted to have it filed in the forum if someone else is wondering why \\openhabiandevice just not works

also didn’t have a problem with the default hostname

I doubt that we are talking about the same.
This is related to accessing Raspberry Pi’s file system from a Windows client over SMB which requires Netbios.
If you do not have problems, you probably use NFS, Webdav, FTP or anything else.

If you do not have problems, you probably use CIFS, Webdav, FTP or anything else.

I’m definitely using the default Samba shares that were set up by openHABian. I’m pretty sure I’d know if I intentionally set up an alternative method for accessing my RPi, and I have no reason to do so.

From this conversation, it sounds like this is not an issue in Windows 10 unless you have services that are dependent on NETBIOS.

Still being limited to 15 characters for hostnames in 2019 is very upsetting. In an age where we are deploying servers in multiple data centres, whether that be on premise or in the cloud and having multiple environments as well means trying to come...

My conclusion: the underlying protocoll of SMB is Netbios (which is activated on every Windows 10 machine), which has limitations (see my post a little bit above)

I’m just trying to figure out why it would work on my Windows 10 computer and not on yours. Since you need to be convinced that this is the case, here’s a screenshot of me accessing my RPi by typing \\openhabiandevice into a Windows 10 File Explorer window:

So, I can confirm that the default hostname appears to work at least in some cases, and the link I posted provides an explanation of why that might be the case. I’m not saying it’s definitely the correct conclusion, but it’s certainly a possibility.

Interesting…
And the link you posted says nothing else what I have been saying since the beginning of this post.

Interesting to know what makes the difference 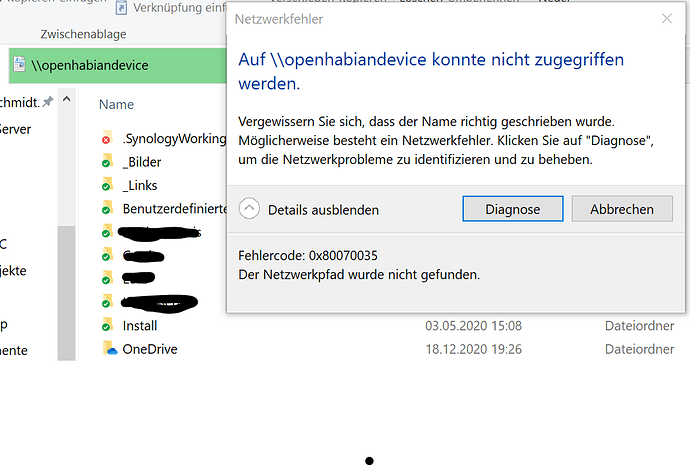 The text I thought might be relevant from the link I posted is:

If you choose a hostname longer than 15 characters, it will work without problems as long as you don’t use any services that depend on NETBIOS. Windows will generate a shorter, 15 character name for NETBIOS and you will have a different NETBIOS-name than hostname. If you have no dependand services in use, or disabled NETBIOS entirely in your network, you can safely use longer hostnames.

Add this to some points from @mstormi’s earlier post:

openHABian installs the most current Samba (4.9.5 I think)

SMB4 isn’t using Netbios, is it.

So if SMB4 doesn’t use Netbios, and openHABian installs SMB4, then that’s why Markus and I aren’t having an issue with the longer host name.

Maybe Windows now thinks that Netbios is required, even though that isn’t the case? Or perhaps you have another service that’s using Netbios.

You could try disabling it to see what happens. It’s easy enough to re-enable if that causes other problems.

How to Disable NetBIOS over TCP/IP in Windows?

It's an old vulnerability but still exists. Due to security vulnerabilities with NetBIOS over TCP/IP, you may wish to disable it by following

Personally, I’d just change the host name in openhabian-config and not worry about it.

Tried that already. Without Netbios I can’t get any connection - even with 15 characters.

This is what I said, it is not a big problem. I am sure that this problem will come up with some other users