I have an openhab 3 instance running with the zigbee ember controller as my zigbee binding. I have a number of different things already connected and working, but lately I bought a few Aqara Motion Sensor P1’s because I needed some motion sensors with built in light in them.
https://www.aqara.com/en/product/motion-sensor-p1

The problem I am running into is that the sensor pairs (Under a wierd name LUMI lumi.motion.ac02) but the only channel it presents is the Battery Voltage channel, which is helpful, granted, but it is not exactly the most important one.

I have been keeping an eye on the event log, and even though the device is listed as online, and that is reflected in the log, I have seen no channel events from it at all.

Is there something I am missing? Does anyone have the sensor working using the zigbee binding? And if so, is there some way to just manually configure the damn thing so it will work?

Check whether zigbee_device_initialized is true: 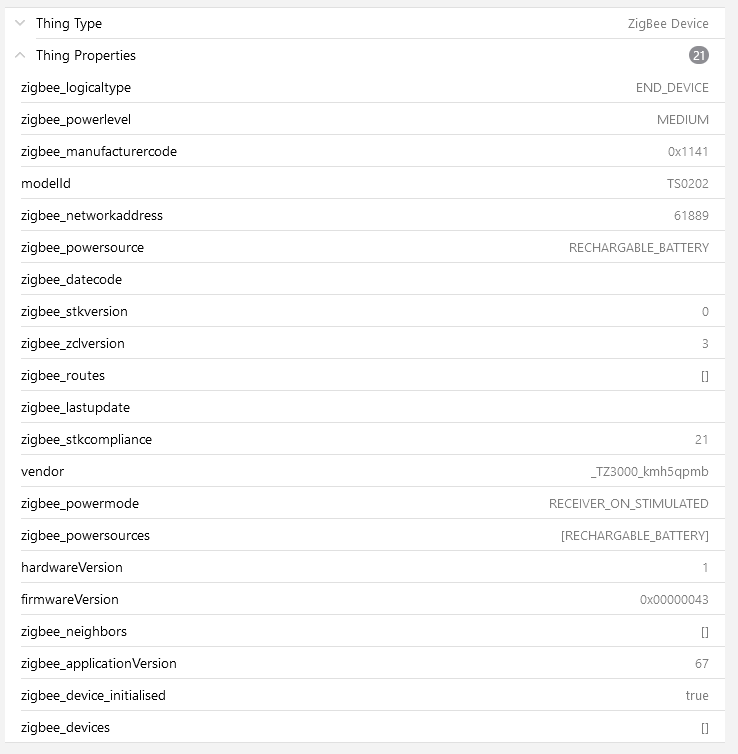 > Press and hold the reset button on the device for ± 5 seconds (until the blue light starts blinking). After this the device will automatically join. If this doesn’t work, try with a single short button press. 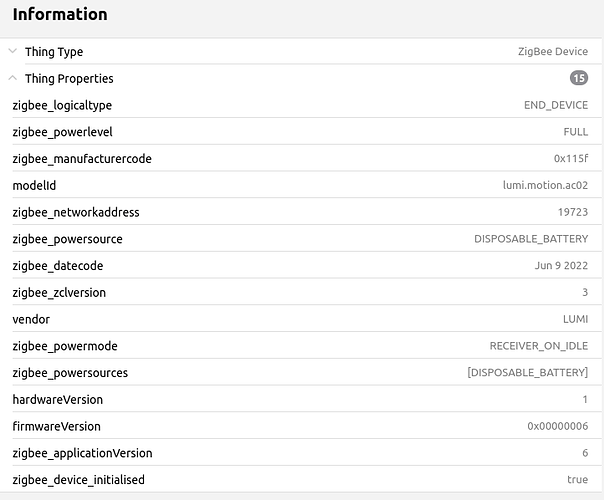 image723×598 43.4 KB
It is indeed initialized, and I can see that one channel. I have reset it multiple times as well. 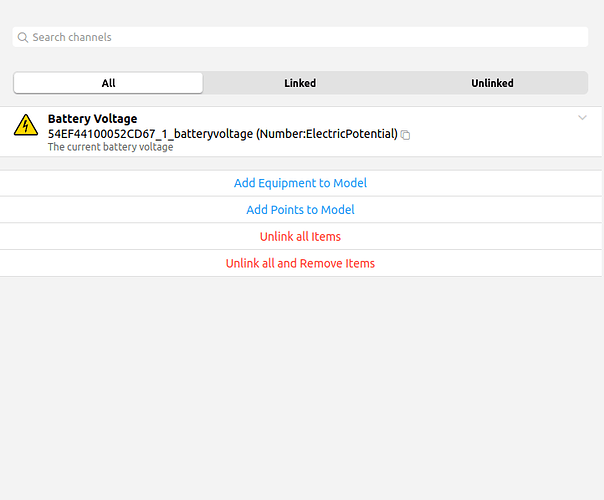 I’ve been using that sensor with zigbee2mqtt for several years. It has lux sensor as well as motion.

Please provide a Zigbee fingerprint from your sensor. Skimming over Aqara Motion Sensor P1 · Issue #5967 · dresden-elektronik/deconz-rest-plugin · GitHub I get the impression that your sensor is different from the Xiaomi MS-S02.

Then @chris might be able to add support for your device to the Zigbee Binding.

So it would seem to be a problem with the generic zigbee controller then?

Openhab’s zigbee binding might not have supported it yet. If you could provide the zigbee fingerprint as @Ap15e mentioned above, it may be added into the binding in the future.

I don’t use the zigbee binding, but instead I’m using zigbee2mqtt to connect my zigbee stuff with openhab.

It depends whether you just want it to work right now, or you’d like to help the built in binding to expand its support.

I’ll get the fingerprint output as soon as possible. If you guys know where to look in the code I am probably not ready to do a PR at this point but I would love to have a look