I am loving some of the features of OpenHab2, but one issue I am struggling is with Rules.

So at first, I wanted to make rules, but PaperUI’s system seems limited.
I could not figure out how to control OR and AND, and neither how to check for time ranges.

On the other hand, habmin, has this complex power with a UI, but rules defined in paper UI do not show up in Habmin.

Can both rules co-exist?
Is it better to use just one of the systems?

PaperUI and habmin are interfaces to configure things and items, and while some functionality may exist in there, neither of them is recommended or meant to be used to create/maintain rules.
You can use any text editor (create files /etc/openhab2/rules/XXX.rules) if you know what you’re doing, but the recommended way is to use the VS Code Extension to create rules. [Before openHAB 2.2, the recommended tool was the ESH Designer. It is still available, too.]

neither of them is recommended or meant to be used to create/maintain rules.

Just to elaborate, there is an Experimental Rules Engine that you can use in PaperUI to create Rules. But it is named “Experimental” for a reason, it is a work in progress and there is little documentation available. You can try to use it but there will not be much help available to you if you do.

HABmin is also a work in progress and I don’t think the Rules development part is fully working right now.

However, in the Experimental Rules:

Currently I want to turn-on the house lights when my mobile device is online AND it happens to be between a certain time-range.

So it would be good if I could evaluate the time expression when the mobile-device-online-status state changes.
Any suggestions on how to implement that?

Any suggestions on how to implement that?

Using the experimental Rules Engine then:

When Item state changes to ON

Then choose the appropriate behavior and/or implement the body of your rule in a JavaScript.

If using the Rules DSL, start by looking at some examples on the forum (there is a whole category). In particular look at Design Pattern: Time Of Day which will show you how to keep track of times of day in a centralized manner for use in your other rules.

If you’re feeling adventurous you can try out Flows Builder - a visual designer for the new rules engine.
Shamelessly plugging my stuff here, but it was supposed to help with these kinds of use cases.

That being said I would also recommend sticking to the proven, battle-tested DSL rule engines for now though. There are some unresolved issues with the new engine.

Anyways, that’s how you could do it:

Perhaps not exactly what you wanted, but you get the idea. Note that you could also make the rules directly in Paper UI too, but they might be easier to maintain together in Flows Builder. 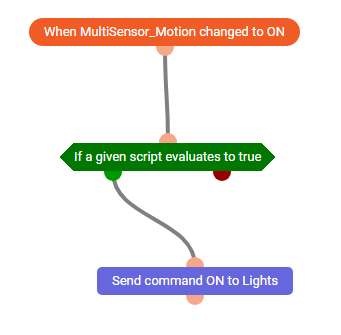 You have to keep in mind you can’t use “return” statements in the condition’s script, instead the script’s “return value” is the evaluation of the last statement.

Here the Flows Builder can help you because editing scripts is far easier than with Paper UI with autocompletion for basic Javascript types including Date (its most useful feature IMO), so that’s how you would code your script: