I have a need for a particular device, and I can’t think of a google query that doesn’t just return all Z-wave wall switches

In my closet, the light is wired in such a way that the hot line and neutral go directly to the fixture. There’s a wall switch wired to cut the hot line, but the neutral isn’t pulled to the switch’s box. Basically, the switch is wired as if it were a pull chain switch in the fixture.

I’m thinking of using any a “embedded” z-wave switch in the fixture. What I’d like to do with the switch is re-wire the single pair to it as “line” and “neutral”, and put in a “switch” that doesn’t actually switch anything directly, it just sends a z-wave on/off that I can interpret with openHAB (using the powerline so I don’t have to feed it batteries).

Has anyone ever seen such a switch?

put in a “switch” that doesn’t actually switch anything directly

What would you then do with this? It cannot control the light. That sounds like a powered Z-Wave remote control.

In what world region are you located?

I think what you are looking for is “no neutral” required…

I would have openHAB see it as a Z-Wave switch (OH doesn’t need to know that it doesn’t actually control a load directly), and have a rule react by sending on/off commands to an embedded z-wave switch in the fixture.

Thanks @5iver. I wasn’t aware there was such a thing. Makes me wonder why most switches require a neutral!

You can just create a Switch Item linked to nothing. OH does not “care” whether the Switch is Z-Wave or something else.

I have one “Switch” that I use rules to change state depending on whether it is dark outside,

I can tell that I’m not explaining this well, or there’s something obvious I’m missing.

When you said “powered remote” you were on the mark. I want a physical z-wave switch, that operates on power, that doesn’t control a load. I’ll have a rule that reacts to changes to that switch and control other things. I suppose I could just use a regular switch with the line and neutral wired, and nothing connected to load. I was asking to see if there’s a more elegant or cheaper solution.

I want a physical z-wave switch, that operates on power, that doesn’t control a load.

I think you might be looking for a Z-Wave relay. You don’t have to connect anything to the relay output. I have no direct experience with these, but I’ve read about others using them to sense outdoor motion detector lights (stuffed into the housing). There are other makers of these relays.

If I am understanding what you are trying to do, you might want to look at the Inovelli Switches. The switch can work without a neutral wire. It has the ability to disable the internal relay so power just stays on. Once you disable the relay it acts as a remote, you can set up an association group to send a command to another node.

The switch also supports scenes. You can run a rule based on the scene received.

Makes me wonder why most switches require a neutral!

The reason why most switches want a neutral is because the switch itself needs power. If you only have line and switched line you would always need to let some current pass to power the switch itself. If you have LED lights this small current can apparently be enough to make your lights noticeably turn on or flicker. I assume the “no neutral” switches do some extra trickery to avoid this problem. Possibly they charge up a capacitor in quick bursts to use as a power source so the lights never turn on long enough to notice.

As an alternative to a “no neutral” switch I can recommend the Aeotec Nano Switch which is what I use. (N.B. I have not tested it with openHAB yet)

Use Z-Wave to control switch, socket or power outlet by converting existing switches and sockets to wirelessly controllable ones with Nano Switch.

It is basically a z-wave relay that can be connected to an external switch for manual control.

I put it behind my light fitting (instead of behind the switch as they show in their instructions) and it was as simple as: 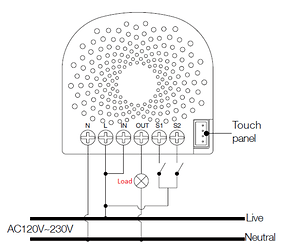 The existing light switch will continue to act like it normally does so will not need to be replaced by a z-wave switch.

The fibaro dimmer 2 can also act as a switch without a neutral.
https://manuals.fibaro.com/dimmer-2/

Thanks for the feedback, everyone. I’m trying to follow the principle of “everything works if the hab server is down”, so hesitate to use things like the NanoSwitch without wiring it to a “dumb” mechanical switch. In this case, I could use the nano as intended and have the mechanical switch toggle the light. But I’m being difficult … I bought a switch with a z-wave motion sensor, and I’d like to use it to avoid needing a separate battery-op motion sensor.