Practical Smart Home for a Beginner

We built 3 years ago and I hardwired Niles Audio Volume controls and IR w/ in-wall speakers along with CAT6 (x3) and RG6 (x2) to each room. I’ve picked up a few “smart” WiFi devices here and there which have their own supporting Apps. Thinking of putting in a SmartHome hub and I noticed that openHAB has a version that will run on QNAP NAS, but curious if I want to take on the hassle what my gains might be by doing so?

What I currently have:

I also added a non-WiFi keypad lockset to the side garage door, but will NOT add one to other doors due to looks.

Do I really need lights? If I did it, I would use hardwired replacement units that look like regular toggle switches.

Thinking of putting in a SmartHome hub and I noticed that openHAB has a version that will run on QNAP NAS, but curious if I want to take on the hassle what my gains might be by doing so?

The hassle of putting it on the QNAP or the hassle of running a hub in the first place? I’ll assume the latter.

The advantage of using openHAB (or any other hub) is that all of those walled gardens and technical silos can talk to and influence each other. For example, turn on the RainBird sprinklers when the smoke alarm goes off, control the state of the shades based on the position of the sun, automatically arm your alarm system when all your phones leave the house, etc. You can also set up other behaviors like getting a reminder if you forget to close a door after a certain amount of time, automatically.

It can also help merge all the apps into just one.

Of course, this all assumes that the technology you have is compatible with OH (i.e. has a binding). Except for the Zwave, I don’t know.

If being able to combine all your tech into one unified interface and allowing them to influence each other sounds attractive than a home automation hub is going to be your only real solution. If you are happy with everything being separate with their own apps and not being able to influence each other, the hassle of learning and setting up a home automation hub is going to not be worth it.

I can’t say whether you really need lights. Do you have some time or some events where you want to lights to just know when to turn on or off based on time of day or some event (e.g. motion sensor)? If not, you don’t need controllable lights. If so then you do. There are plenty of options to make dumb switches smart (e.g. Shelly1, Sonoff) or install smart switches in place of your existing switches. I personally use both Shelly1s and zwave switches.

openHAB certainly intrigues me, but I was curious as to more of the day to day application to help me over the tipping point of its consideration. Our son started driving last year and left the garage door open a number of times. Hence the consideration for a tilt sensor on the garage door. He’s better about it now, but that seemed like a good option to add. I think I’ve got a decent enough experience with other electronics projects to take it on, but my family isn’t going to want to have it intrude in basic functionality. I honestly was surprised that my wife supported the keypad entry lock (non-WiFi / non-BT). Everyone likes it, but we don’t want (or need) every lock to the house to be a smart lock. I think the BT proximity detection of the “next model up” would be nice at this point, but a year ago I wasn’t even sure if my better half would support one at all.

It’s difficult to predict the day to day application, because what tends to happen is that as you learn the tools and realize the possibilities, the ideas for applications come on their own, one at a time!

I’d say the fact that your here at all means you’re already is over the tipping point.

I wouldn’t mess with my NAS though, not when a raspberry pi is so cheap. Better to stay safe and keep them separate.

I myself use Z-Wave for lights. Not all of my lights are on Z-wave, but the ones that need to be are. I still have and use physical toggle switches on all of them, but it’s great to also have the single button that turns off all outside lights + patio fans + patio speakers with one touch.
I also like the “sleep mode” button on my bedroom wall, which turns off all outside lights (as above), my workstation, and my living room ceiling lights, while turning on the bedside light and the bedroom TV + computer. It also sets my “Sleep Mode” item to ON, which in turn sets the central air conditioning to a comfortable temperature, and turns off the lights above my main gate. If I had a security system, it would probably turn that on too.
When I wake up, the first thing I do is to turn on power to my workstation by hitting a wall-mounted z-wave button which sends a signal to openHAB. openHAB then also cancels sleep mode, which sets the air conditioning back to normal.

I couldn’t have planned it all out in the beginning, the system has grown as I get more ideas and learn to use / live with it… and I’m nowhere near done!

As I get better at this stuff, I rely more on building my own devices and less on off-the-shelf expensive Z-Wave devices… but Z-Wave was a great starting point.

Lief thanks for the follow up. I have a QNAP TS-251+ x86 w/ 8Gb of RAM currently running only the minimal of default apps. It’s main duty is as a fileserver for RuneAudio. Not having to purchase another PI to start playing with openHAB is a tempting start if for anything just to corral the WiFi apps into a single interface like Rich mentioned.

When my QNAP QS-253 Pro was new, I (at a friend’s recommendation) I used on of the included downloader apps. A few days later, the app froze and I had to restart the NAS, which spent something like half an hour checking the disks. My data was fine, but the lesson wall well learned. I got rid of all the apps and never, ever did that again.

Yikes. Off to scoop up another PI and squeeze it on the shelf. 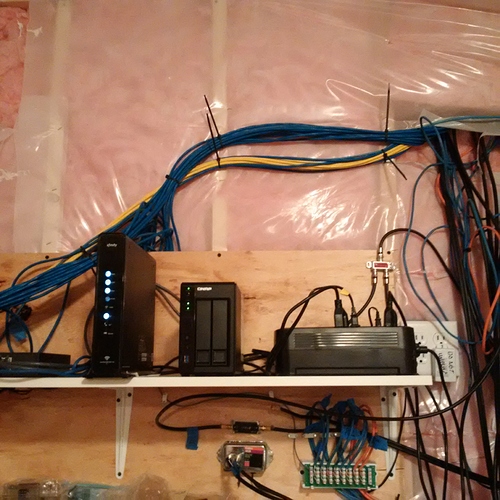 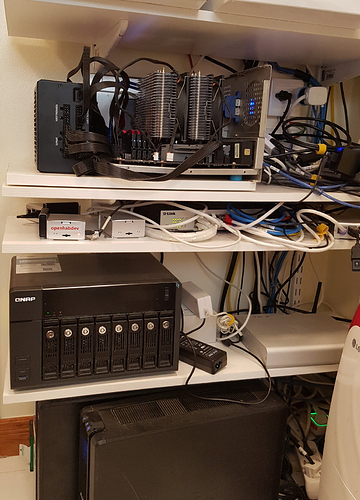 Top to bottom:
Core i9 workstation. The case started life as an ATX tower more than 15 years ago. Took an angle grinder to it to transform it into a shelftop – fits on a 1 foot deep shelf!
Next shelf has three PIs. Openhab development (for testing new versions and/or new devices), utility (not currently in use), ethernet switch, and all the way to the right is my main openhab PI with USB Z-Wave controller (UZB) plugged in.
Then the QNAP NAS and the retired fibaro HC2 controller.
Finally two UPSs and a dehumidifier.

That is pretty hardcore. It makes me want to dig out our old Dell tower and go at it with the tin snips.

If you have a use for it, you totally should. Nothing like a little DIY to brighten a rainy day.

My workstation was the first time I did this. It was several years ago but it worked so well that I’ve changed motherboards and CPUs twice since then, but kept the same old case!

Since it worked out, I found another use for the technique last year when we moved into this house. 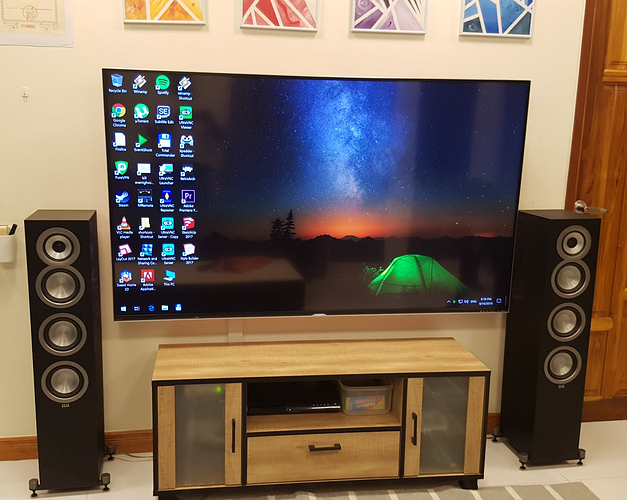 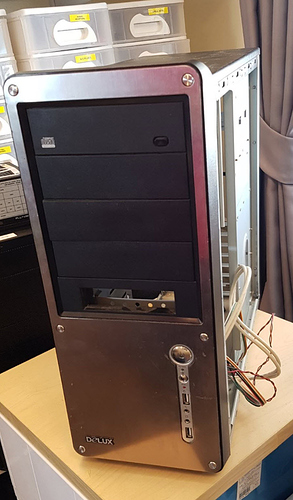 That TV cabinet looks much too small to house the tower, yeah?

Nothing an angle-grinder can’t handle. 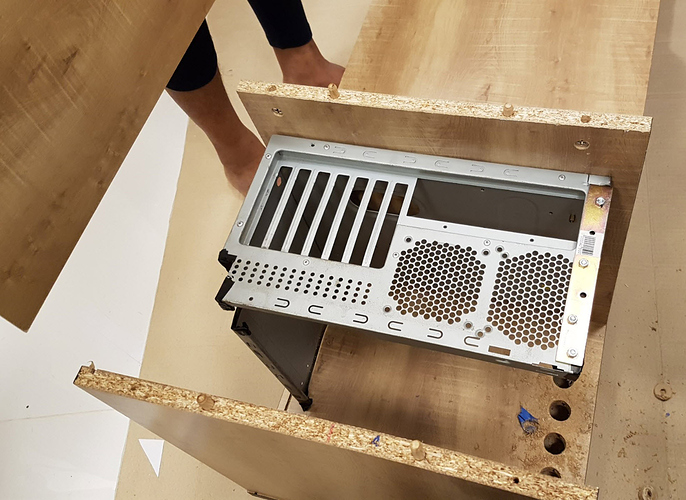 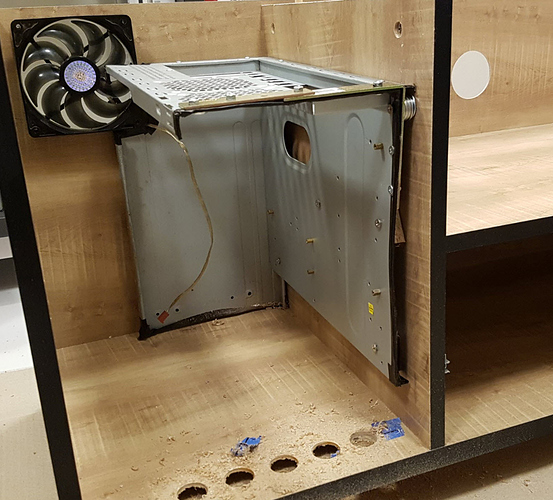 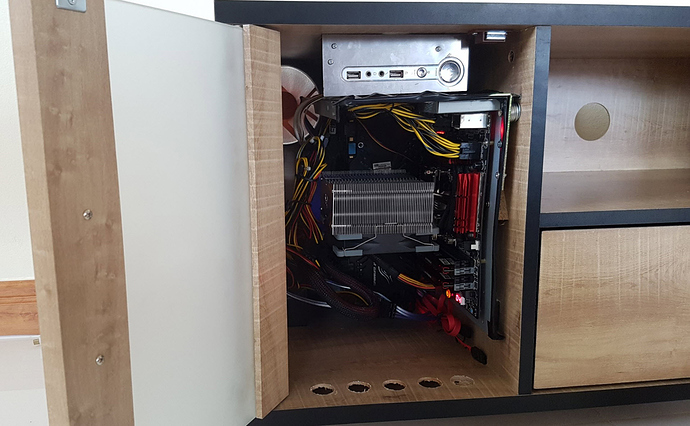 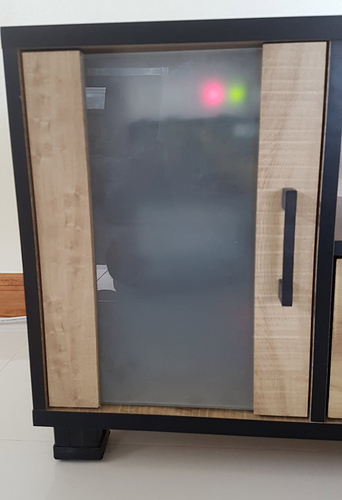 Here’s a clearer picture of my workstation too (two motherboards back) from when I had it out for cleaning. 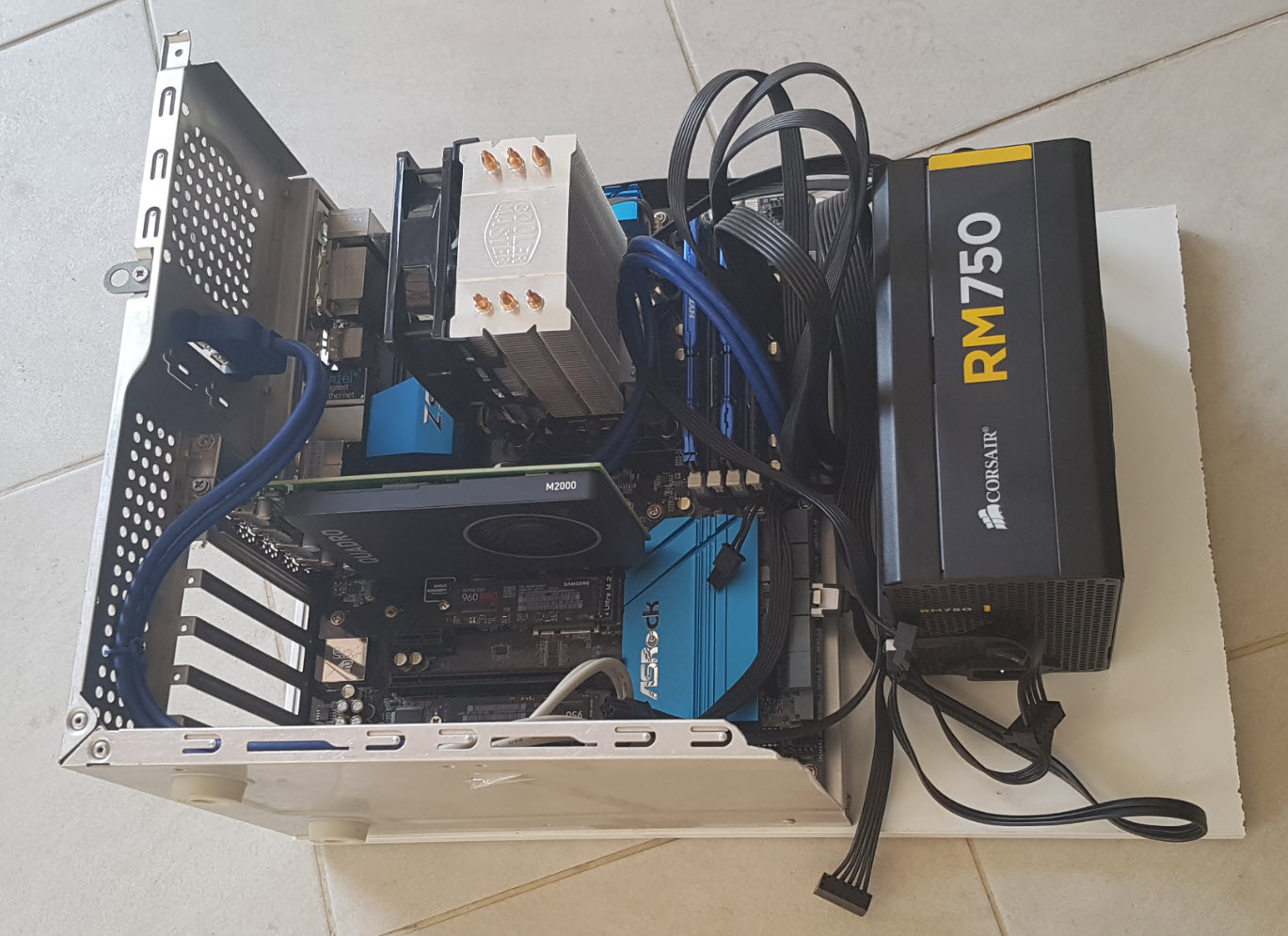 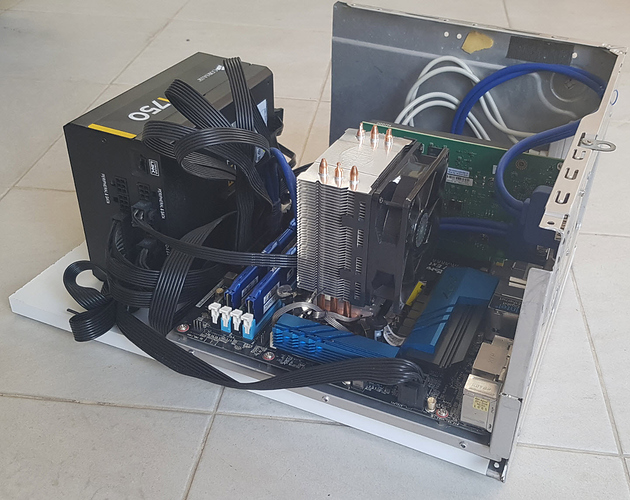 So I risked it and installed openHab on my QNAP NAS. WiFi network and ZWave bindings installed w/ Paper UI. None of my devices directly show, although I have a ton of local IP devices to start playing with :).

Well I should have realized that I needed a Z-Wave stick for the QNAP. I uninstalled the app and have been kind of busy with other things. I did pickup a MyQ Chamberlain garage door hub. Looks like they backed off of the subscription services, but since they originally were with Wink I was able to get the Chamberlain and Wink accounts talking. This spurred some additional discussion with the family over the holidays and we are going to be adding additional Z-Wave stuff. First just a hardwired outlet to setup a script / robot for when the garage is opened after dark and turns on a sidetable lamp.

Our local electric company also had a huge rebate on the Sensi / Emerson smart thermostat. It was free with $3 shipping. Since we already have the none smart version of this thermos stat I think we’ll be good with it’s integration.