is taking me directly to an exception page.

where did you get it?

The correct one should be https://community.openhab.org/c/add-ons/actions

(since actions is a sub category of add-ons)

Sorry – from the home page of the community site under the Addons section, Actions.

Same applies to Other.

sorry for my ignorance … could please post the URL on which you can see the broken URLs?

On the home page, the Actions and Other buttons in the Add-ons section had incorrect links. They were both missing the /add-ons part of the URL. I reloaded the page in the browser and the broken URLs were corrected, which suggests that all my navigating around the site was AJAX-loading other parts, there was a stale cache somewhere, etc. Anyway, seems fixed now!

even better, thanks for the Update!

I still seem to have this issue - or a similar issue when trying to view the latest posts when a tag is selected. eg, select zwave in the tags, then select the Latest button, and it takes you to the following link.

This page states that the link doesn’t exist, or is private… 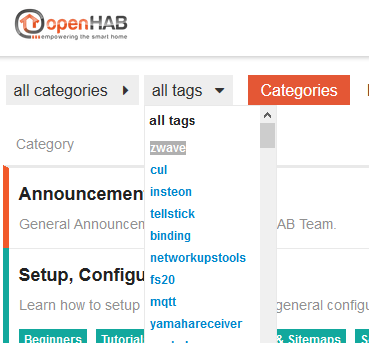 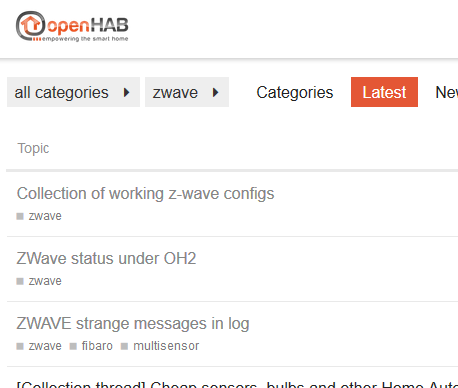 We’ll look into this.

It may or may not be related, but I often see “New(1) Unread(1)” at the top of the page, but when I click on the New link, it tells me there are no new messages… It seems a little strange - or maybe I just misunderstand the meaning of ‘new’ but even when there are new messages, it always says there aren’t any…

Is it because I have email notifications enabled for all messages, or is there something amiss?

Actually, further to this, I just clicked on the “Unread(1)” link, and it told me this link didn’t exist or was private (same error as per the messages above), so I guess this is all related to the same problem?

this seem to be a known bug (see https://meta.discourse.org/t/dismiss-unread-doesnt-clear-the-top-menu-unread-counter/13475/14)

Hmm - I’m not sure if it’s the same. I pretty much never have any messages in New or Unread. It might tell me there are messages, but if I click on these buttons I normally get an error. Then if I click again, it tells me I have no unread (or new) messages. So it’s not that the number of new messages isn’t resetting (which I think is the issue you referenced) it’s more that it doesn’t seem to work…

thanks Chris! Strange … this is working for me!

For me too … sometimes it helps to clear the browser cache.

For me, it’s not working. I currently have a number of new messages - they show the blue new label in the list of topics, but if I click on the New option, it tells me there are no new messages to list…

So, at the moment, in the Latest menu, I have the following -:

Maybe I just don’t understand how it’s mean to work, but to me, the New menu should provide a list of all the messages with the blue new label - is this a misunderstanding?

That is really strange …
… I don’t have those blue “new” marks anywhere, but as I read the welcome message again, it mentions something about those marks:

If my assumption is correct, there is still the question if this is a bug or a feature

I don’t have anything in the “watched” config in my settings.

@Henry @teichsta - any thoughts on this? It’s quite annoying as it basically means it’s not possible to get a list of new messages.

Could you try to create another user and see if it shows the same behaviour? If not I’ll the new user accordingly.