Hi,
on my new RPi3 I have quite higher CPU temperature as on my RPi2.
I‘m currently between 60 and 65°C which seems quite high formy opinion. My old system was between 35 and 50C depending on the workload. My PRi3 seems to idle on a very high level.

Is this only me - or is this a common issue?

Not sure if this helps or not but below is the temp on my PI3 over the past 7 days, Im only running OH 2.2 on this pi with grafana and influxdb running on a separate PI3.
The Pi has a UPS hat on it with a variable speed fan, the break in the fan data was me tweaking settings and breaking things but the CPU/GPU values were consistent, the fan is controlled by a rule set so switch 25%, 50%, 75% or 100% depending on temp, the Pi lives in a cupboard near main fuse board and wireless router/Network patch panel and there is little natural air flow. 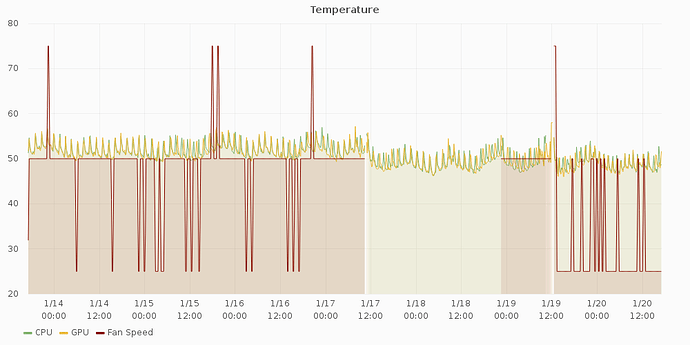 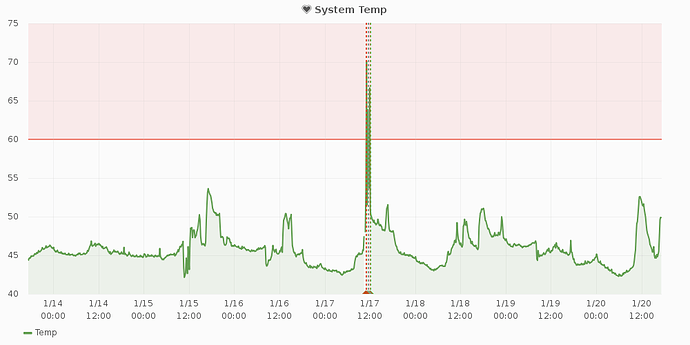 influxdb-temp.png1000×500 33.1 KB
Added Grafan/Influxdb server temp, CPU only, for comparison, this currently sits on a window sill in my study but will eventually end up co-located with the OH server when I get time to be bothered to move it.
No UPS or fan on this just plain old heat sinks on the usual components.

Also interesting - seems like the openhabcloud binding is a real resource killer: When I install the binding, my temp. is between 63 and 67°C; without that binding it’s 58-59°C.

But even without, I have a significant cpu utilization:

When you say the openhabcloud binding I assume thats not the “openHAB Cloud Connector Bundle” but something else?

I think this, from my point of view, needs a bit more in depth analysis while capturing the same resource stats with openhab running or not and bundles loading one at a time or concurrently, what I need to do is figure out how to get the CPU/GPU Temp, CPU runtime stats and memory stats from the OH Pi into the influxdb while openhab isnt running, I use the exec and systeminfo bindings for this currently but to keep things consistent would need get it working from the CLI.

My observations so far are that OH2.2 is more CPU and memory hungry and I would hazard a guess that as its more CPU intensive it will generate more heat.

For me getting the data into influxdb and then using the same graphs is important to show trending, I must admit I seem to be spending far more time these days monitoring the Pi3 resources and building rule sets to alert me about resourcing issues rather than controlling devices.

On a slightly separate and more positive note I did recently move from Oracle Java to Zulu “1.8.0_152-b76” and memory wise things have improved and I’m not seeing such a consistent upwards trend. 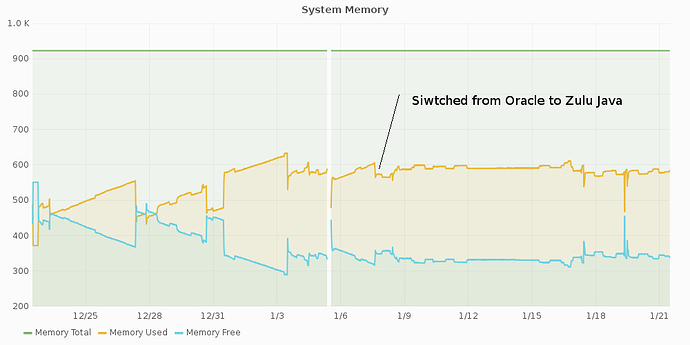 Should have said this change includes the fact I’m running the same bindings before and after.

Just wondering which method you are using for monitoring the PI3 temperature?

Hi Kevin,
I do use the sysinfo binding.Tried now a small script I have here on my RPi reading the system temperature:

But the result is the same - too high for my opinion. What I do also find strange is the behavior in the last 24 hours: 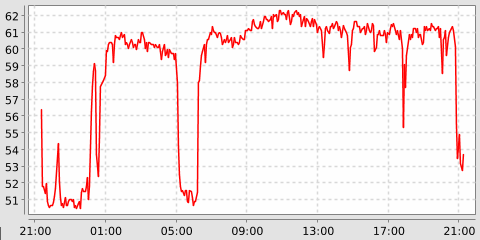 I was originally using exec to pull the temp and then milli.js to convert but when I started to configure collectd so that I can get stats without OH running I noticed a difference in the temperatures reported by each option, I then configured cpuTemp with sysinfo binding and that better matches collectd statistics than the exec option.

Originally used exec and all graphs to date based on the below method, my thinking is collectd and sysinfo are dynamic updates where as the exec option only poles the statistic every 10 minutes.

I’m going to leave all three options running for now to produce individual comparison graphs after 12+ hours but looks like the exec data is skewed and giving a higher reading than is actually taking place.

Once I have stats with OH up I will stop it and see if that changes the picture by much, cant leave it down for 12 hours as that would affect the home auto and annoy the wife.

With collectd running in the background I should get a better picture of the temperature changes with and without OH.

Ok below is my basic findings for the past 24hrs using system temperature as provided by collectd.

The PI remained in the same place throughout the test with no one opening the cupboard door allowing additional air flow. 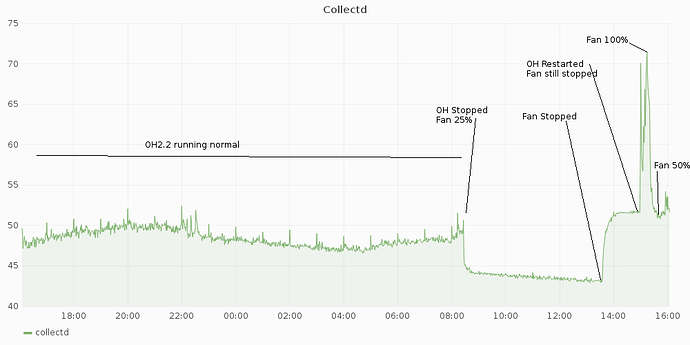 My conclusion is that Ive now switched from the exec binding temp to the sysinfo temp as it’s closer to the truth and hopefully provides better data, that with no fan running the PI levels out at about 52 C and with OH2.2 running it hit 70 C before the fan kicked in on 100% and brought things back under control.

I have the following bindings installed, see below, and my next test will be to only have one enabled at time and see both temp and CPU statistics to see if any particular binding increases temperature and cpu load.

Hi Kevin,
I “resolved” my temperature issue by purchasing a small case with an active fan; before I didn’t have a fan at all, only a heatsink on the CPU.

Here you can see the difference between with/without fan active: 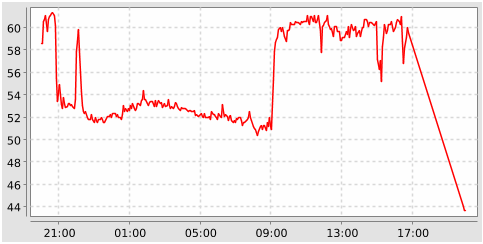 I’m now close to 42°, which is more than acceptable. This fan is just connected to +5V and GND on the RPi3.

Thats great, I guess if I ran my fan at 100% all the time it would lower the temp but im reasonably happy with the pi being at the 51-53 C mark.