Originally posted this on the forum for Home Assistant, but since I’m now a committed member of OpenHAB and have finally finished this piece, seems right to share it here instead.

The aim was to have a display mounted on the wall to host a dashboard. At the time, the Raspberry Pi screen was just released, and it seemed like a great and cost-effective way of doing this. The cables were all internal, but I had trouble figuring out ways to mount a screen effectively. 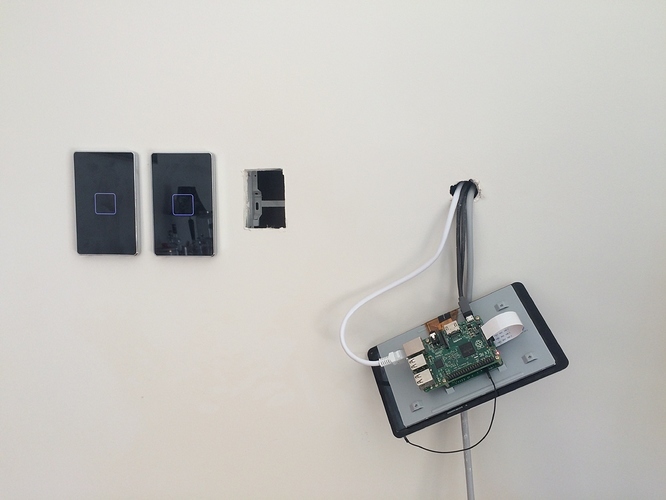 I purchased a screen case, but this didn’t help. There was no lip around the edge to screw into the wall, or where I could put velcro, etc. I eventually decided to make my own from a piece of MDF. It simply has a rebate to hold the screen, and a lip big enough to stick velcro tabs to (though in future I would like it a bit slimmer).

Works perfectly, and even though I don’t intend on doing it often, means I can quite easily take it off the wall to replace SD cards etc as they start to get faulty. I did need to make a bigger whole in order to make the cables flush, but could rectify this in future by having a much thicker frame and deeper recess (but you can’t see the hole anyway so maybe this is the best way).

what are you running on the pi for your dashboard?

And I’m still thinking what the best thing to use is. It will probably be something using dashing, there’s quite a few I like built off that.

I was looking at ImperiHome the other day, and that actually looks fantastic, however, until Android for Raspberry Pi is a little more stable, I’ll have to think of something else.

Will post some more once whatever dash I use is up and running!

Looking a bit better now! (It’s not as reflective in person).

Also, as I mentioned, I made the frame out of MDF, but I’ve just whipped together a 3D model of it. I want to get it printed in the new year and see what that looks like. Would be so much easier and cost effective! Since I haven’t been able to find anything like this to purchase, thought I might as well share.

I’ve linked the .STL file to my Google Drive, here.