I would like to get my current power draw and meter values from my Power Smart Meter KAIFA CL101 MA110M.
I see that some people mention the DSMR binding of @mvolaart in the forum but my smart meter does not mention “DSMR” in the manual, also I could not find detailed info how to connect what with which cable to test it.

The provider told me there is a customer connection labeled “Wired M-Bus” and I could get a key from the provider to read the values. But they don’t know how or have any other details.
Looking at the DSMR docu I assume it would be a “smartyBridge” as I should have an encryption key and are based in Austria?

Would be great if someone could point me to the right direction or let me know if it works with this smart meter at all. 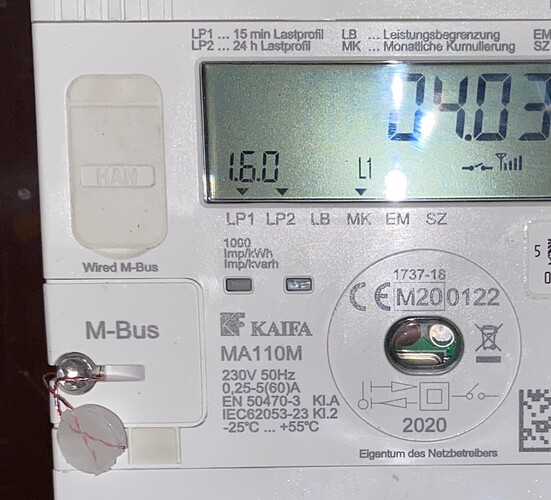 but the photo shows KAIFA MA110M.
I don’t know if it has an impact but which one is the one you have ?

DLMS is mentioned as a feature for MA110 here: https://www.kaifametering.com/product_details/3.html

So does this mean I would need a serial to RJx cable and the binding can read it? 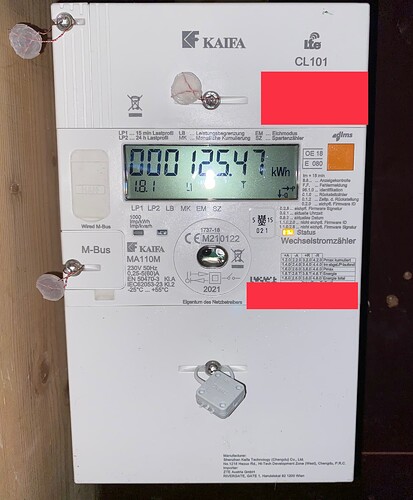 I also found this document:

That document shows the supported IEC standards and it lists the same one ( IEC-62056-21 ) that is also shown in the DSMR binding documentation.

As far as I understand your box supports using an IR read/write head that needs to be put onto the circle in the center of the box. Using such hardware you can read out values according to
https://wiki.volkszaehler.org/howto/getstarted

I have also a Kaifa smartmeter and waiting for a solution which is mentioned here, there is also info about the cable.