Reverse a ceiling fan via zwave?

The fan itself does not have a reverse switch on the outside, so I assume there is some internal wiring to do this.

Is there some type of (small) module I can put up in the fan between the zwave switch and fan motor to control reverse?

Quite often, ceiling fan motors have two “live” power input wires. One runs it forward, one runs it reverse, never run both at once!
You’ll need to reverse-engineer how the existing remote controller is wired in to figure it out.
Then find out if your zwave controller can duplicate that arrangement.

Does such a zwave product exist? Or can I build something up? Also, it should be compact enough to fit up in the ceiling junction box/cover.

I thought you had a “zwave fan controller wall switch” of some mysterious model. What kind of output does that have? What actually is the requirement for your mystery ceiling fan model?

Just a normal GE zwave 3-speed fan controller. It won’t reverse the motor on its own. I wanted to use the openhab app or a scene(double click) to trigger a rule to reverse the fan motor.

It won’t reverse the motor on its own.

Oh, that’s a pain.
For the “requirement” I meant how is the fan motor wired. Assuming the usual “alternate live feed wires” for F/R, you’d need only a SPDT relay to route the speed controller live output to the F or R wire. A DPDT would also do, of course.
Both sorts of products seem to exist, no idea on physical dimensions.

I don’t see how a SPDT would do it.
Looking at these diagrams:
http://www.ceiling-fans-n-more.com/ceiling-fan-wiring-diagrams-schematics.php
I need to reverse the current flow through the second coil.
(Maybe I’m missing something)

Also, it turns out the RF receiver is built into my fan, so I may need to dig it out or just get a different fan.
My fan: https://www.replacementremotes.com/store/productfiles/836071008863_install.pdf

It all depends on how the unidentified fan that you have works. Might well be that all the ones I have dealt with are oddballs.

New fan has a DPDT switch to reverse the motor. 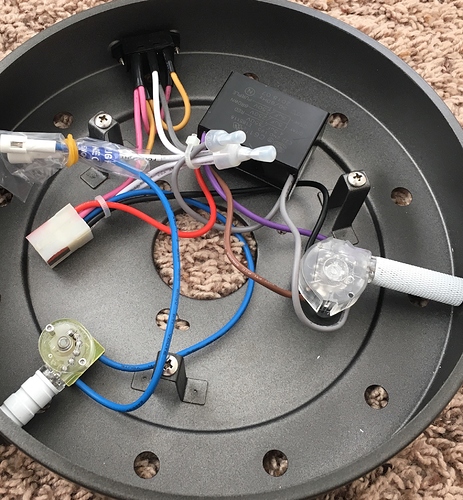 Is there a zwave DPDT relay?

Is that the forward/reverse switch at the top of the picture? The reversible fan wiring information I found indicates that a DPDT switch is typically used to set fan direction of rotation. That switch simply reverses the phase of power to the fan motor’s rotor coils relative to its stator coils. To properly control such a fan motor will require at least two relays, one with two sets of COMMON, N.O. and N.C. contacts for controlling fan direction and another with COMMON and N.O. connections for powering the fan ON and OFF.

I believe fan speed control is typically part of the ON/OFF circuitry.

I know it’s much later, but did you ever get this working?

@kdub454 I temporarily put this on the back burner. I found some zwave relays which I think would have worked with the above DPDT relay. I think the cost and size of all the parts deterred me a little, but there may be a better solution now. That said, I’m still somewhat interested.