I have a MagicHome RGB LED strip controller based on an esp8266 setup with Tasmota.

I recently bought another generic looking controller. It’s always a gamble what will actually turn up, and this time what arrived doesn’t have an esp8266.

Some photos of the board below, but it looks like it uses a BL602, which, according to some very recent articles, is based on RISC-V, and has only just been released. 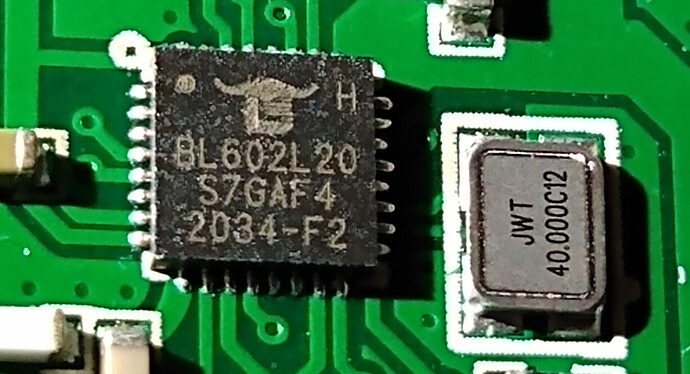 Ideally, I’d like to load something like Tasmota onto this, but that’s obviously not possible, and something similar probably won’t be along for a while.

I just thought some others might be interested to know that these are out in the wild already, being used instead of an esp8266 and if anyone wants to test something I’m happy to help!

Whats the Status? Do you have sucess getting some with ESP Chip? If yes, please let me know your source.
Thanks!
BR

Check the first link in my post - that’s where my ESP-based ones have come from. But you can never be certain until it turns up…

I ran I to this today. I bought mine off Amazon. It was pretty disappointing when I went to flash it.https://www.amazon.com/dp/B08BKSLBFP/ref=cm_sw_r_cp_apa_fabc_1H0aGbVZF3HRC?_encoding=UTF8&psc=1