I can confirm invoking scripts with callScript() doesn’t work any longer. I’ve tried to call with the full path like callScript(/srv/openhab-conf/scripts/myscript.script). No success.

Well, the error is it can’t find the script so either:

Someone experiencing this problem needs to file an issue.

As a work around, depending on what your scripts do, you can achieve the same thing in Jython/JavaScript/Groovy by creating a library. Or you can implement them in a rule and use OH 3 Examples: Writing and using JavaScript Libraries in MainUI created Rules. Or you can write rules that call other rules. This is particularly easy to do in UI rules as there is an “execute another rule” Action you can choose. But you can do it in code as well.

Notice how you can pass data to the other rule. Much of the stuff in the above code is done for you in the Helper Libraries.

Unfortunately you can’t do this from Rules DSL as far as I know.

Ok i have putted in a rule, so that is my workarround. But then the question remains why have a script folder if you can’t use it?

But then the question remains why have a script folder if you can’t use it?

Because there’s a bug apparently that needs to be fixed. Has anyone filed an issue?

I’m willing to file the issue if someone could give me a hint where to do that (well. Github is clear, but…). I have no idea atm in which part of OH this could or should be fixed. Thanks!

How to file an Issue Solutions

There will be times when you discover a bug in OH. This tutorial explains how to file an issue so the developers can know about the bug and hopefully fix it. Do I Have a Bug? openHAB is a complex system with lots of options and ways to configure various capabilities. As the old saying goes, openHAB gives you a lot of rope with which to hang yourself. So how do I as an average user know whether I’ve done something wrong or if there is a bug? The good news is we don’t expect you. Step 1: Ask fo…

I’m pretty sure this would be for openhab-core.

OH3 callScript - scripts are not executed

Same here, any workaround would be great!

Tried to copy my 3 scripts into the new framework, but unsure how to use them.
Rule did not find them using callScript():

I ended up copying the scripts’ contents into new rules, triggered by dedicated items which I simply send an ON command where I would otherwise call the script. It works quite well as a workaround.

Please see OH3 callScript - scripts are not executed · Issue #1990 · openhab/openhab-core · GitHub and try if the workaround fixes it for you on 3.0.0:

According to my tests, there should be a simple workaround:
Simply rename your script files from myfile.script to myfile.script.script and they should be found.

Ok Will test this evening let know if it works!

It didn’t work form me still the same error: 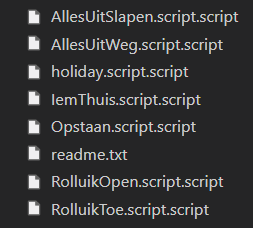 just for the test i let it run every 20s…

Adding “.script” to the name did not work, neither did the removal of the entire extension work. In both cases the same error message is logged:

It does work for me, however you need to use callScript('myfile.script'), i.e. add one “.script” to the name of the script you want to call.

That also works for me! Great job guys!