Thinking of adding tablets via PoE and a couple Ubiquiti Access points and it got me thinking that I could also add some other sensors off this too since it’s easier (safer?) to run vs a wall wart and holds in the walls.

Is there a certain PoE system that’s better, provides more stable current? What’s the max wattage these things usually put out, basically would it handle a couple access points, a couple tablets and then other arduino/esp8266 sensors? I’m assuming most are 40 volts so I’d have to step it down which is fine.

Not directly answering your question, but these things are awesome. Much better than any consumer grade AP I’ve ever used. I have 4 of them in one house and 3 in another house – all managed from a single management console. I also use Ubiquiti switches to power them – a 24-port US-24-250 (also managed from the management console) in the one location and a TS-5-POE in the other location. The US-24-250 provides selectable 24V or 48V PoE on individual ports.

There are a couple of POE standards. https://en.wikipedia.org/wiki/Power_over_Ethernet

If you aren’t buying a standardized poe switch or device, you can buy poe injectors that will accept whatever voltage you like. As for current… you are limited by the length of your Ethernet cable and voltage you choose if you don’t use standardized equipment. Just size properly so you don’t melt stuff or brownout your gear.

I run 3 ip cameras off of one of those with a 48v supply. You can pick the supply or make your own for custom voltages. Works nice as I have it plugged into my giant backup battery.

I also swear by ubiquiti for quality home wifi. Slapping in another ac lite tomorrow to replace my last uap. Put those on POE too… same deal, power stuff centrally and you can run it off of a single large server sized battery and a single generator circuit if you have that.

Thanks, the thing I don’t get about the standard is the handshake and how power doesn’t exist unless the device tells the switch it needs it? That wouldn’t work if I just wanted to power some sensors off it so maybe I’m better off without managed and just buying some cheap dongles? 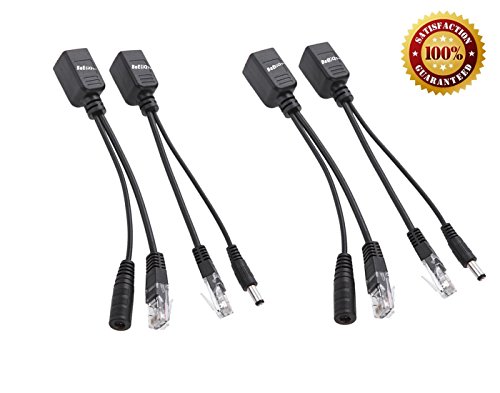 Features: * 100% brand new; * This kit need the external power adapter to power on the device. Passive PoE Injector and PoE Splitter Kit allows low cost of delivering power over the network cable for ...

Oh yes, I agree. Without being an electrical engineer, I wouldn’t try to get into making devices that handshake. If you simply want to use the free pairs in an existing ethernet cable for low power devices… the amazon link(s) or similar POE injector/splitters are your best bet.