Should I continue building my KNX network if I choose openHAB

Hey, on part of my school project I did such relay controllers to KNX, I noticed that I could do full KNX network just with those, it also works on node to connect arduino control software to knx (really cheap stuff, less than 40€ per node. even if I order PCB’s from china) 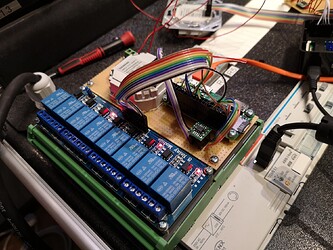 So I planned to build automation system to home just using those home made devices.

But because I dont have any that good UI for android and if i choose openhab. is there any point to do with KNX or jump to some even cheaper physical network protocol? I did like how KNX is done and it had ok. documentation. but just with RS232, I could build nodes less than 20€ piece? I dont really need 65k devices at my home, I think 100 would be enought and that could be done with 3-4 serial lines.

Finally this is your decission of course and you have to ponder the benefits and drawbacks for your special situation. (Especially the cost factor depends on your situation and abilities)

Generally i would say knx is a good fundament for a home automation system.
It is reliable and long time standardised, also you are not depending on one vendor.
You seem to have earned some know-how already and like the workflow of KNX.
With a combination of standard knx and self-built field devices like shown above you are able to built a very flexible system based on a stable bus-technology.
openHAB has a KNX binding, so you could use both together.

I can’t say much about a custom built RS232 solution (and of course about your know-how and experience for larger installtions with this), but it definetely will be more specific and you may get problems where only a small user circle can help you with.
If you have problems with knx there should be way more users that are able to help you out. (Not only here)

Personally i love to twerk around with things and already planned to do something similar like you, with a knx bus conector and some arduino stuff.
But besides that i like to have other things stable running while working on the next “project”.
That would lead me personally to a knx based solution. (But of course this will cost a bit more money which is totally correct.)

From my experience I´d strongly recommend to have your “backbone” build with KNX.
Why? Because it simply works even if OH or other things are failing.

Nothing worse than a wife hitting a light switch and nothing happens because some binding, rule, bridging is not working due to any issues in network, soft- or hardware.

With knx, once you configured it, things are stable as rock. Running KNX for nearly 7 years now the only failure I had was an actor breaking. Replaced in 15 minutes (if you know what you are doing).
Downside is the price tag, but I was willing to pay that when it came to the decision which road to follow.
Considering extending the system knx somehow sucks due to the requirement for having cables in place. Tried the wireless KNX components from various vendors, none of them working reliable - and those are far from being cheap. Thats the reason I chose ZWave and Zigbee for use cases where I wanted to run things wireless. Bridging things into KNX and backwards with OH is not 100% stable, but with the 2.5.10 version I came to a point that was acceptable.
So my recommendation would be, as I said before, to have all essential things in KNX, whereas the “nice to have” stuff could e.g. be based on ZWave. Both KNX and ZWave have a broad variety of devices for nearly every use-case. Everything not available you could build custom as you have the knowledge.
Coming to the UI to be honest I do not use OH besides testing purpose. My impression was that I need to put far too much effort into the UI (OH 1.x and OH2.x) to have a proper result (Schedules in UI is a very weak point here). So Im running a Domovea from Hager, which is outdated and not as flexible as OH but it fits for my basic needs.

Overall my preference is to have things stable and not to spend months on figuring out how to build a UI.
But I´ll take a look at OH3 UI as soon as some releases have been out (I jumped out of the early adopter train some time ago

), maybe I can get rid of the Domovea. OH is improving with every release and I would consider it not longer as a child, but a teenager not yet being an adult. Thanks to all the maintainers by the way, they are doing a fantastic job!
If you are willing to spend the time or money is the main driver, your custom solution may the the one you prefer - but consider:

Good points, I feel also that knx seems to quite stable as an bus and I need to check that Domovea from hager.
I cant do UI by myself, I did check some python UI modules but I want android controller.

Also selling house is valid point, but I would anyway bought power, 4 or 6 port relay and light switchs from shop and that would be main bus and enough for house (really small one)
Other stuff like plant lights, craft/hoppy room, cellars I could but behind my raspberry pi logic

I have full ETS5 lisence untill next summer, so it would be good to do now. But at least I didn’t get totally negative comments so I think ill do something. + I have outdoor lights running nonstop last 8 years… good time to do something for them too

Well as you chose openHAB you should be consequent in doing so, that is run the GUI there (and the Android app), and the automation of course. Forget about that comment on UIs, it ain’t representative. Yes you need to spend some time to get used to it but OH GUIs are absolutely fine to use, thousands of people did before you, and it’s still less work than trying to use some other UI or even HA system.
On choosing the proper technology, there’s no definitive answer.
I would NOT DIY unless for fun. Only YOU can repair it. No compatible replacement products.
Step back and make a plan which parts of your house you want to attach to the automation system.
KNX requires you to run a data bus everywhere which can be very difficult/costly.
In retrofit scenarios, most people use radio based technology (ZWave, WiFi) for this reason.
With OH you can also combine this like KNX where the wiring is plus RF actuators elsewhere.

Forget about that comment on UIs, it ain’t representative

Many users have build amazing things in HabPanel. But I guess you agree to some extend that neither the classic/basic UI nor the Paper UI did reach the required level of maturity for painless end-user experiences.
What I meant to say is, that OH UI up to now neither was a simple drag&drop approach nor did it cover aspects like schedulers out of the box.
OH is something you need to spend some time to achieve - from what I saw in the forum - superior results. But if you do not have the time (yes, that is me) or knowledge it might be easier to choose an “end user solution” over a “you have unlimited degree of freedom to build whatever you want” one.
Its somehow similar to the difference between good old Infocom text adventures and e.g. Monkey Island: Imagination, creativity and the console can take you everywhere - but it is far easier with pictures and clicking onto “Look behind you, a Three-Headed Monkey!”

Nevertheless I will have a deep look into OH3 when there is spare time and a final version. I would happily replace my proprietary closed source UI with OH.

What I meant to say is, that OH UI up to now neither was a simple drag&drop approach nor did it cover aspects like schedulers out of the box.

Well this is leading off topic so just a quick response:

Apart from the fun part doing that all for yourself. Please be also aware of your local laws, requirements, and other more or less legal stuff. You could lose your insurance on your home, even if your DIY isn’t the core reason for a fire or other damages.
at least here in Germany only professional electricians are allowed to even touch electricity, which is connected to the electricity supplier.

With that in mind, you could connect your DIY and let it check with an electrician, but as mentioned more stable, realiable, and also scalable is a “professional” solution, and KNX is one.

I know, this is a DIY forum and stuff, but my mantra is always:

PS: you still can do loads of cool stuff with low voltage equipment.