I am wondering if anyone can recommend a smart Radon gas detector. The only smart one I see is the Airthings AS 2900 Wave Smart Radon Detector on Amazon. They provide a python script for the Rasp Pi to read the measurement number from the device. From there, one should be able to send an mqtt message and integrate with OpenHab.

Anyone has used another one?

In my experience, the FTLabs Radon Eye RD200 is the best one. I have three of them. (well four, one which went up in smoke during some lab session on my workbench). Since I wanted to log different places in the house, I ripped out the BT and the rest of the electronics in them, only keeping the regulator and insted added ESP8266 to them, making them send MQTT every 10minutes.
They are great - much faster than most of the other bunch, and better accuracy than many.
I use it to log around the house, and also control my ventilation in the ground floor.

It will give you a hunch, which in many case is good enough. I started out with the good old “Siren 3”, which has similar performance to the Airthings afaict. The downside is that you can’t really use if to locate the source of the radon gas, should you have some. Also, obviously you cant use it for controlling your ventilation.

Come to think of it, there’s a new RD200 around that logs to the cloud, which is a better solution than the BT. But I don’t know the price point of it.

Anyway, good luck with your meassurements.

Yes, I just read about the new RD200 with WiFi connectivity. It definitely will be better than over Bluetooth; the downside is higher price point.

If someone is in Canada, there is a Bestbuy $70 discount now for the Airthings Wave device. Apparently a new version is coming out that also measures CO2 and TVOCs (besides radon, temperature and humidity).

Hello @vespaman,
I’m very interested in your project. I meanwhile also own a RD200 and I have ordered another one. My intention is to remove the BT unit of the second sensor and in opposite to your project , I’ll try to replace it by a LAN connection.
Because of your experiances to open the unit and remove the logic, may I ask some questions ?

Thank you in advance.

Anyone has integrate a radon gauge in OH?
Can you share your solution (including sensor type) ?
I Just discover I have high concentration of radon on my cellar and I would like to measure it and build a force ventilation when a target concentration is reached but I don’t know even where to start …

Rob,
If you have soldering skills, it is pretty straight forward. I actually have been toying with the idea to make dedicated PCB’s, but in the end I just ‘pachted in’ the ESP8266 board on my units.
I also did not care to keep the display - it turned out that the RD200 has a special, undocumented operating mode for giving the average for the BT module (wich drives the display), so I removed all of it (The display, the BT module, and the buzzer).

Be careful when/if you power the units up outside the housing, I think you must not touch the chamber while operating. Lots of metal, so easy to short circuit…

There’s three screws; two on the bottom under the label, and ony on the top, which is best drilled ‘open’ through the clear plastic. It is located exactly on the outer silver ring, in line with the LED.
Then you need to force open the plastic case by startin on one side at the bottom.

If you still want to do this, and need some pictures, I could upload them somewhere.

But - the reward is that they give a very quick and (I think) nice report of your house, and can easily start fans etc.

Yes please. I am interested in having pictures … I already have 20 ESP at home, Just one more should be ok

Note that you should make the ESP go to deep sleep between the Radon mesarement polls (I have it report every 10 minute), to keep the power consumption low. Internally in the RD200, there’s only linear regulator, which will build too much heat (IMO) if you do not let the ESP deep sleep.

Hello Micael,
Thank you very much for your answer, I appreciate your help.
I’m pretty familiar with soldering and I have also MC experiences. So it should not be
a problem to modify the unit. After some first tests with the first unit, I instantly
ordered a second one. Both work excellent, so far I can value that. I got very interesting results, because I live in an area with over average Radon occurrence.

Am I right that the ionization camber is the same as RD200M ? So I expect the documents I found on the web regarding pin out of the connector and the commands for accessing the sensor, are the same and valid, right ?

After I’ve finished my last measurements, I’ll start to modify one of the units. Now I know
how to open the unit hopefully without damage.
First I’ll try to keep the original electronic to be able to use the unit still for stand alone operation, but I’ll try to bypass it by a switch and route it to one of my own MC boards with ETH connection. That fits better to my own home control solution.

Thanks a lot again for you friendly answer.

Yes, the RD200 houses a RD200M, and the doc’s on the web is the correct one. As you have seen, it is quite well documented and easy to get going. But if you measure the comm’s going on with the BT module still in place, you will see undocumented messages. FTLabs confirmed this.
If you want to keep the stand-alone functionality, you will most likely have to have your own board outside the RD200, since it is hard to fit anything in the unit.
Also, I think you should keep in mind, that the RD200 is probably sensitive to noise on the (12V) power line, and probably also emissions from close by electronics.

Here’s som pic’s on the RD200 split. Note the three screws one on top (the hard one!), and the two in the bottom. Once they are removed, you will need to pry it open, starting at one bottom side. The unit is very tight even without the screws, so you will need some screw driver or similar to break it open. Take care not to make too much marks. And take care not to push your tool too far in, in order to keep the chamber untouched. 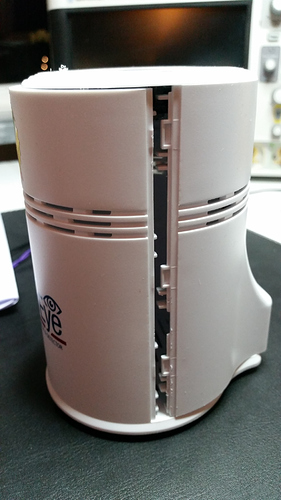 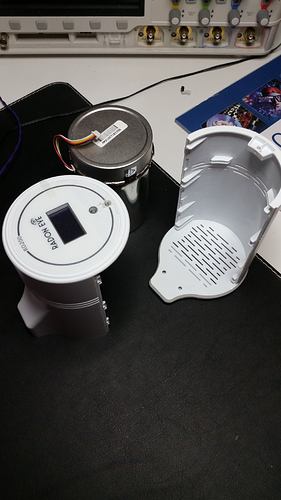 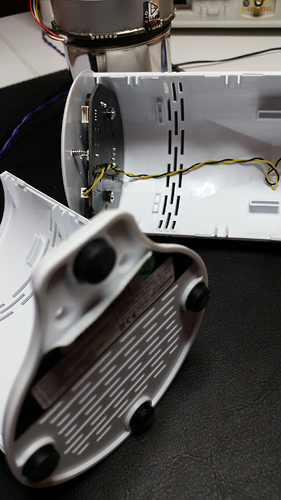 I’ll take care during opening the housing as you mentioned.

You are right, I intend to use an external micro, but I think the serial connection allows
to separate the external HW quite well.
Regarding BT, If possible I plan just to power off the BT unit and by-pass power to the
sensor by a small switch. So I do not expect unknown commands or answers. But this
is a guess.

Thanks a lot again.

If you disable the BT, you will have no problem at all!
Best of luck! (And if you have any more questions, I’m ready!

Hi,
thanks for all information concerning dismounting.
Can you write a guide how to connect it to the ESP and later to OpenHab?
Some picture are also welcome
Regards
Lorenzo

Sorry to bump a bit of an old thread but I signed up just to respond here after finding this thread on a google search.

You mention that if you were to probe the live serial bus between the included board and the sensor you will see undocumented messages, and that this is confirmed by FTLabs, and earlier you mentioned an averaging mode. Can you elaborate on any of this? I am also working on a project to integrate ESP8266 modules with my RD200 sensors and I found one pdf for the RD200M that is mostly understandable (although what exactly the “transfer period” is still eludes me, changing the value doesn’t seem to do what I expect, oh and why on earth would they choose to use mthread?..) but it really doesn’t list many commands. I feel like there’s a lot more out there. I tried contacting FTLabs without any response several times over the past 2 years.

The goal of my project was to make a replacement board that could operate in standalone mode or utilize my in-home environmental monitoring API (it’s an ugly mess right now so I don’t want to say too much about that side of it) to post data to it. Basically, I wanted sensors that I could use in my house, or lend to a neighbour for a few weeks for them to check out their radon levels if desired.

To show I’m serious and to also share some of my progress with you guys, here’s a comparison picture of the boards I came up with (sorry my hand soldering is pretty messy):

A quick list of hardware specs:
ESP-12E
128x64 white 0.96" OLED display (ssd1306)
AT24C256 EEPROM (still not sure why I thought this was a good idea, but hey it’s on there now)
WS2812B RGB LED
2x push buttons (I was planning to drill the partial existing holes on the top of the enclosure to expose the buttons)
I also sourced the correct Molex Picoblade connectors so that my boards would be plug-and-play.

The end-goal for my project is to open source everything (when it’s in a releasable state). At this point I have a proof-of-concept talking to the RD200M and logging the readings to my monitoring system, but due to me obsessing over ideals I am presently (and have been for a long time) working on a complete re-write of my code base to be more organized and support additional sensor types. My plan was to rework my platform to support temperature (DS18B20), pressure (MPXV7002DP plus external ADC for monitoring sub-slab suction levels), VOC, and PM2.5 sensors. Today I am working on the helper classes for the RD200M which is how I stumbled across this thread. Ideally I’d like to be able to have some kind of status or communication check command I could run against the sensor so that I could detect whether an RD200M is present allowing me to share a single code-base across multiple sensor types, and also it would be great to be able to get a serial number from the sensor itself to uniquely identify each one (as I have noticed a bit of reading variation between units).

Oh, also to help, if concerned about marking the case when opening it, I used a metal spudger to release the clips without any case damage. It’s super thin but when pressed in along the clip itself releases them just great. Unfortunately I totally screwed up all that careful work when peeling back the top sticker as part of it ripped and remained stuck to the housing

Great job!!
Can you share the wiring diagram of the PCB and the code.
My target up to now it is just to understand how to connect the ESP to the sensor and how to read the radom value.
I don’t care about the display and the LED but I don’t know where to start and I am afraid to distroy the sensor which it is not cheap !