One of the more interesting challenges in adding smart and automation technology to your home (or office) would be the ceiling fan. While homes have been wired with lights, outlets and thermostats for a long time, ceiling fans are a relatively new residential fixture option that isn’t always present. This is the type of feature that is dependant upon the environment, builders and the home owner’s preferences. While that calculus might be about practical use, we also can not ignore the fact that the ceiling fans are also decorative. There can be a sense of life created by having a ceiling fan provide just the lightest of breezes. Like many people, this one one of the first upgrades I did to my home. 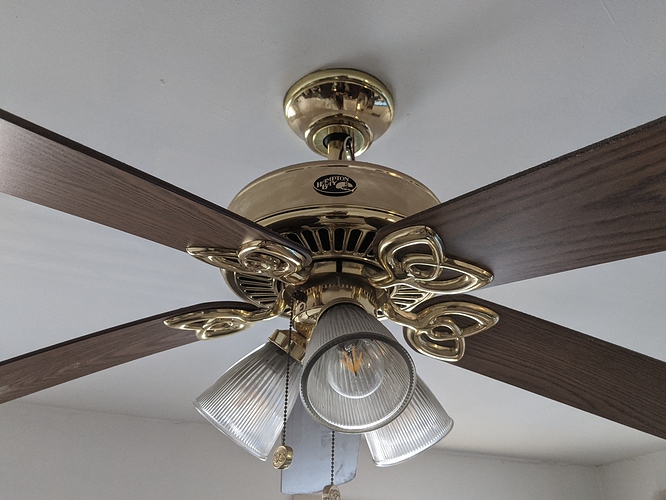 It is at that point the realities to upgrading your home with new things starts to bite. The typical AC motor ceiling fan is electrically unique because unlike other fixtures it requires a 3 wire cable (usually 14-3) instead of the 2 wires (hot + neutral and the ground). This is because there are separate light and fan controls going into a 2 gang electrical box for separate switches or if you’re one of the cool kids, a 1-gang box with fancy switch like a Lutron Maestro. Chances are if you are upgrading you weren’t one of the cool kids and were faced with the task of either running a new cable or using what might have been your first piece of home tech- a wireless fan controller.

Yea, let’s do that instead of tearing up the house-

These devices place an RF controller at or near your ceiling fan that connects a 2-wire cable to the 3 wires you needed to have control of your fan and lights. A little RF switch lives in your switch box and give light control (including dimming) and fan speed control- typically 3 or 4 speeds. This is what many of us have today. 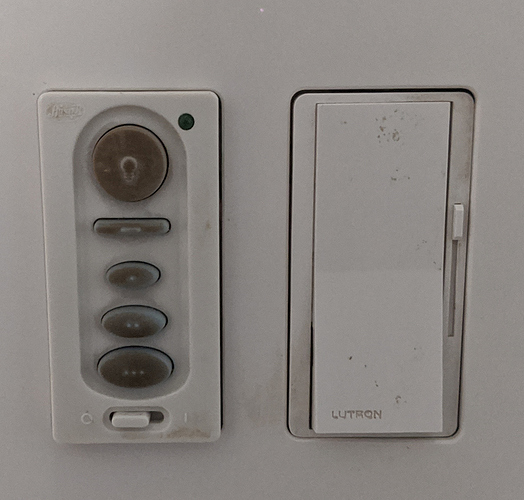 (RF ceiling fan control switch is on the left) 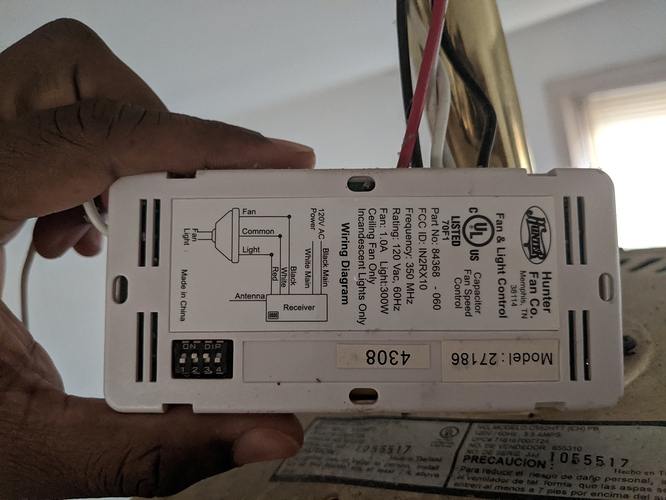 First let me just say this my solution… a solution and not the solution. Unless are doing this work at the time of building you’re going to have to compromise on a smart solution implementation in some way and there is nothing wrong with that. Furthermore, if you are not comfortable doing electrical wiring you should bring in an electrician to help you plan out what you want to do. My motivation for this post was to conceptually explain a solution to a problem I think many people would have. In researching, I was surprised at how will people were willing to make their ceiling fans less functional- e.g. give up dimming or give up fan speed control, just to have “smart control”. I found it odd that implementing smart tech would actually lead to the loss of so much functionality. While compromise is necessary, I was pretty sure there was a way to do this and I was surprised that the approach I’m going to outline was not already out there as a possibility.

Ok, here we are in 2020 and now you’re faced with the same issue again. There aren’t any switch devices I’ve seen that are able to be a dimmer for the ceiling fan lights AND a proper fan controller. I say proper because if you have already researched this you’ve learned that controlling your fan speed is NOT the same as a dimmer for your lights. Even if such an animal existed, that would only address the upgrades to fixtures that are 3-wire and what many of us need is a 2-wire solution. After thinking this through I realized that the solution needed to do the same thing as my current RF control box did, that is, to split out the fan and light controls at the fixture. The question was how.

Electrically speaking all the RF controller does if share the hot and neutral lines between the light and fan motor. The RF switch you place in the wall then communicates directly to that module to control the individual light and fan functions. To replication that, you are going to tie the hot to the Aeotec and GE hot / line terminals. You are going to also tie the neutral to the Aeotec and GE neutral terminals along with the ceiling fan’s common. Lastly, from the ceiling fan, you’ll tie the light control to the Aeotec’s “out” terminal and the fan control to the GE’s “load” terminal. I would recommend getting a small spool of wire properly sized to your breaker for this circuit so that you can place the units comfortably. In my case, my RF control unit lived on top of the ceiling fan’s body so I put the fan controller in that position and the dimmer opposite it. One reason for that was to give better z-wave coverage (by not haven’t the devices and therefore their antenna’s too close), the other was that the GE has a LED that gives visual feedback as the speed is changed. The compromise is that you’re going to do more wiring and have to think about the placement of these devices. It probably won’t be perfect but with a little ingenuity and willingness to work through problems, any compromises won’t seem so bad compared to what you get. 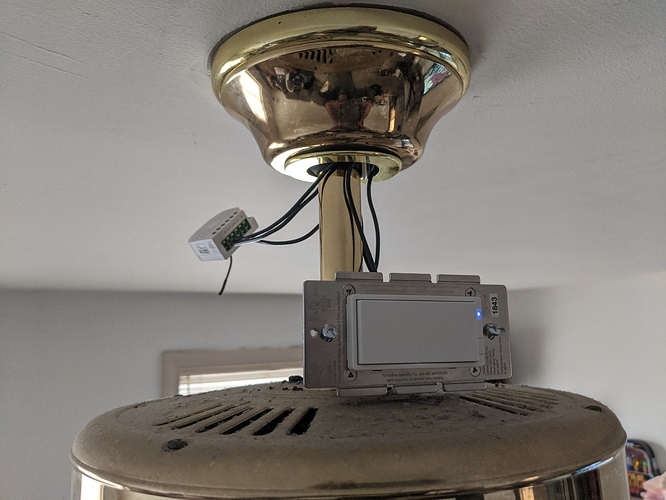 Done… and since I setup the devices before I installed them (I highly recommend configuring in-wall devices before you install them), I was controlling the ceiling fan from the OpenHAB android app and Basic UI interface once I flipped the break back on. Great… now what about some sort of wall switch? Again, if I am upgrading, I shouldn’t be losing much functionality so for me some sort of wall switch was a must have.

This is the one to the slickest devices out there and I really don’t know how I would have solved this problem without it. The old RF switch sat in a housing with a switch at the bottom that essentially acted like a master switch for the RF controller at the fixture. For now, I left that in because I didn’t have a spare dumb switch laying around. Using just the two top quadrants on the Wallmote, I can send scene data to my OpenHAB server to control all the functions I need. 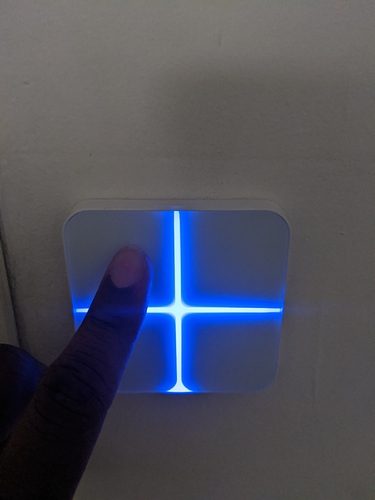 This was the fun part because I got to decide how to do this- tap, tap and hold, swipe up and down were all available for me to implement the fan and light controls. The compromise here is that I had to stick a device on the wall next to other switches. It’s definitely not the best match but with the Wallmote, instead of only 3 discrete fan speed levels I created 5. With the lights, I’m able to get a much lower dim light with LED bulbs by tweaking the Nano’s settings (thanks to Chris C. at Aeotec for help with that

). Another win was that I can adjust the brightness up or down whereas with the RF controller it was only on way- a rather annoying issue since the lights would come on at the highest level and then you would dim then (after getting yelled at by everyone in the room). Having this level of control offsets having to learn how to use the Wallmote. It is very sensitive and neither the quadrants nor LED light between them glows. Even during the day it’s hard to see so there is a chance of sending the wrong scene but that is where you have to get creative with how you use it. All in, for me this was not a huge compromise but another great thing about using OpenHAB is that you can make changes quickly. The more you and your normal users play with these controls the better the implementation will be and hopefully the more they will want.