i need a rule to update an group icon when on of the group items is changing to 1 or below 2.0.

I got some Homematic Contacts and heating units.
The contacts only show LOWBAT where 0 = full and 1 = empty.
The heating units are able to show an value in Volts like 2.80.
And all my items are in the same group to open them in my sitemap.

I found a rule in the google groups for openhab:
https://groups.google.com/forum/m/#!category-topic/openhab/sitemaps/NdYUMO5S7jI

I´m not sure about this so i need someone to have look at it.

The when clause is what triggers the rule. because you have two different types of items, it’s a bit tricky. My suggestion is to build two groups for your battery items and a proxy Item:

plus a simple rule:

First of all, review the sitemap wiki page for how dynamic icons work. In short the icon that gets displayed is based on the state of the Group Item.

I notice that you do not have a Group Item named BATTERY in your list of Items defined. You must define the Group and in your case you need to set the way it rolls up and summarizes the values of all its members (see the Group section on the Items wiki page).

But one problem I see already is you have a mix of Item types that are a member of BATTERY. That likely won’t work as expected because openHAB needs all the members of the Group to be of a consistent type in order to roll it up. For example, you have a mixture of Contact and Number Items, so what sort of Item should the Group behave as, a Contact or a Number? I don’t think it can be both.

Finally, you have two conditions under which you want the state to change and they are somewhat incompatible as stated. You can have one Icon for when the Group’s state is 1 and another for when it is 2.80, (see the Items wiki page for how icons work). The first problem with this is there really isn’t a good way to summarize the Item’s states in such a way that the Group’s state will tell you this information. MAX, MIN, AND, OR, and AVG are your options.

In looking at your rule I see more problems/misconceptions.

The when clause is based on events, not states. This is why it makes no sense to have an AND in a when clause, because no two events will take place at the same time. This is also why it makes no sense to have a < or > in a when clause. The rule can trigger when an Item changes, receives a commands, or even when an Item changes to a certain value but that is it. This when clause is based on state, not events so all this logic needs to move into the rule itself.

Another problem is that when you send a command or post an update to a Group it passes that value on to all of the members of the Group. So if you send a postUpdate(“high”) to BATTERY you will get all sorts of errors because “high” is an invalid state for both Numbers and Contacts. Ans since the Group’s state is based on the states of its members it is not independently commandable or updateable.

Instead you can put the Number Items and Contact Items into separate Groups and create a String Item to represent the “high”, “low” state.

NOTE: I use the long form if statement so you can add logging statements more easily if the logic isn’t quite right

#Sitemap
You can’t use the Groups on your sitemap. Groups on the sitemap only allow you to have default behavior, no customization or special cases are allowed. But you can get the same subframe behavior of a Group.

#Icons
Finally, you must have two icons in the webaps/images folder. One named “battery_high.png” and the other “battery_low.png”.

i´ve read your post and understand it.
It helps me alot to understand how OpenHAB works to get deeper into rules and building up this whole system.

I don´t know if the rule is working but the whole sitemap is broken because of the EOF error at Battery_low.
Only half of the icons are shown, the rest got an missing image symbol becaue they´re pointing at text.png.
When take out the Group Battery_low the same error is shown at the next Group Battery_volts.

This is caused by a syntax error somewhere in the file. A missing closing bracket is a common cause.

You should be editing these files using Designer. It will immediately find and tell you when you have a syntax error like this.

@Udo_Hartmann: Yeah i know, i changed the Names from BATTERY to Battery as i was writing my post.
So my Items are all named right now, but the post got BATTERY and Battery

@rlkoshak: Look at my Items code, the error is coming from the OpenHAB Designer !

And when i comment out the Battery_low Group, the same error will be shown at the Battery_volts Group.
It seems like the Designer and OpenHAB itself doesn´t like the “:”

The sitemap is broken with this two Groups in the default.items … 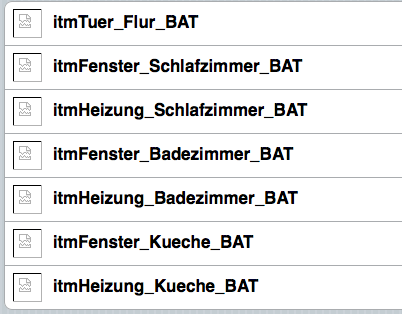 When i comment out this lines the sitemap isn´t broken. 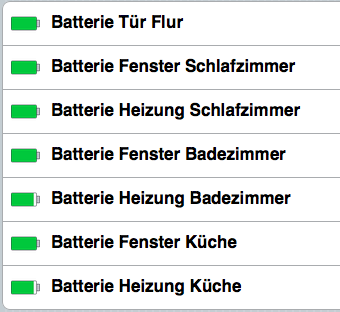 And there are two errors in the battery.rules
(i put them in my last post as comments starting with //)

Thanks for your help !

OK i found the problem

The sitemap is now correct and the Battery is showing an icon, but it´s the wrong one …
The battery-high.png icon is displayed but all LOWBAT are 0 and now BATTERY_STATE is under 2.00 Volts.

I messed up. You need to tell it what route of item the group should behave
as. So it should be

I found the problem.
The Value of Battery_low will be CLOSED when one of the Batterys is low and not OPEN.
Also the itemtyp and function has to be behind Group and not the Item name.

This is my final (working) setup.
You´re free to use it in your own setups.

Sitemap item that´s only visible when one battery is low:
(Something like a notification)