All,
even though there is a similar thread I was also involved in, I prefer to start a new one for better transparency.

Glad it’s working. I would have generally expected that your original configuration with a powered device 3m away should have been ok, but there’s a lot of variables that can influence this…

I used to get lock state updates from my Lock on 3.0.2, but since 3.1 my lock sends battery updates only.
(So, that’s working at least).

As discribed in the other thread, I have a wall plug as a hub to ensure good connectivity (and obviously it works for the battery state).

I can normally control the lock (ON/OFF) through OH, but after I locked it, OH obviously receives a OFF update from the lock after a while.
I had the same issue a while ago and set the command poll period from 1500 (default) to 10000 to solve it.
Also changing the lock using the dana lock app is not reported correctly.

What I did try to solve it:
Removed the lock from controller, deleted thing, uninstalled zwave, stopped OH, used Silicon Labs Simplicity Studio to delete the danalock completely from the stick (including an old device not being used anymore), then re-included it securely. Because it was recognized as a new node I don’t expect a conflict with the old node19.xml.
Or should I have removed it prior to inclusion?

Checking with the zwave log viewer I get (from locking the door to “Lock OFF update”: 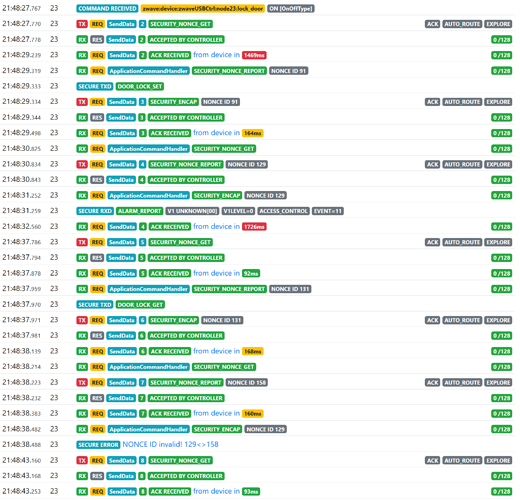 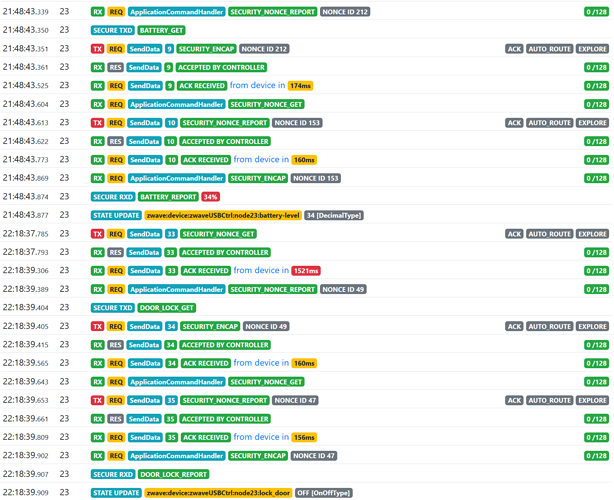 - Just for the record

I focussed too much on SW, but not HW.
So, actually the lock was de-calibrated and I needed to calibrate it.

EDIT:
This obviously was really the culprit.