[SOLVED] Get Text and Number variable from IFTTT data

Hi all
Having a bit of fun with Google Home talking to OpenHAB with the latest play using IFTTT to parse VoiceCommands to change channels on the Samsung TV. 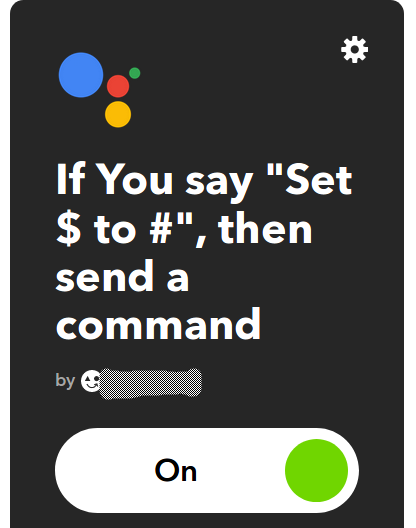 Even with DEBUG set on the log only shows

My limited knowledge of rules gets me as far as

which I know is not correct but I have no real knowledge of where I am trying to get {{NumberField}} from.
I have set smarthome.model.script.voice to DEBUG but get no DEBUG information.

Maybe my import line is not quite right. Any pointers? Thanks in anticipation

I’m going to suggest you take a step back and work with more basic Rules and configurations first before you tackle this problem because there is almost nothing about your Rule that makes sense and I don’t think you will be able to be successful at this until you understand Rules better in general as well as how Items work.

I have no experience with Voice Control but I see the following issues:

which I know is not correct but I have no real knowledge of where I am trying to get {{NumberField}} from.

Because you don’t. That is an IFTTT feature that lets you format the Text that gets sent to OH as a command to the VoiceCommand Item.

I have set smarthome.model.script.voice to DEBUG but get no DEBUG information.

Because there is no such package name. And even if you had gotten that DEBUG to work, it would not have shown you anything useful.

The browser inspector for IFTTT shows

This is immaterial to OH. That helps format the text that gets sent to OH. OH has no such concepts.

Maybe my import line is not quite right.

It isn’t, as mentioned, but it isn’t the source of your struggles.

I applaud your willingness to just jump right in but your lack of understanding of how OH works is greatly impeading your progress. You can use this as a test case to help you learn some more though I would recommend starting with some easier problems.

Be sure to review the Beginner’s Tutorial and the Concepts and Rules sections of the User’s Manuals.

Then review the code you found that does voice control and make sure you actually understand how it works. Then you will be successful.

As always, we are here to help with any road blocks you encounter along the way.

Hi Rich
Thanks for your response but you sure have a harsh way of conveying yr message.

I have no experience with Voice Control but I see the following issues:

There appears to be a VoiceCommand Item, which is probably a String Item which receives the already translated text

You skip the important parts of the Rule. You should be using commands to the VoiceCommand Item as the trigger to this Rule.

It was a mistake to have not posted the whole rule. Here it is now with (excessive logging for troubleshooting and) the mod’s I have made following your reply.

This was the key bit of info I needed:

I applaud your willingness to just jump right in but…

Thanks. I thought it better to have a good go at it than just say “how do I do this?”.
It is now working. Thanks for your help and advice.