Hi,
This is old and I hope you can remember what are the exact steps using the Zensys tool to set the correct associations?
Thanks.

Very strange.
After adding the node with Zensys and loading up PaperUI (thing added from Inbox)
I see the following in PaperUI (Controller appears 2 times in Lifeline): 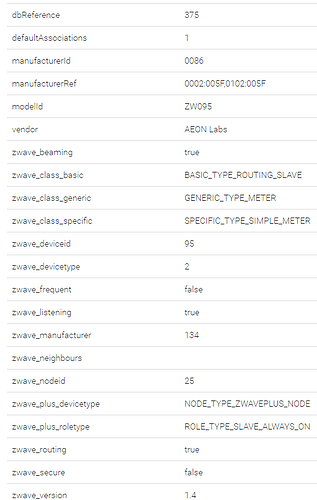 Sorry - I’m still waiting to hear back from Aeon on this.

Without knowing exactly what you’ve done, this is probably as you have now duplicated the associations. This is really a messy area of ZWave - it’s gone through a lot of change in the past couple of years and there are something like 8 or 9 command classes linked directly to associations. On top of that there are a lot of non-compliant implementations which is caused by the ever evolving standards.

Here is the sequence of events:

The new node appeared in the things list with the Lifeline set as noted above (Controller, Controller).
I did not do any other modifications and noticed that the reporting is working as it should, which did not work before.

The new node appeared in the things list with the Lifeline set as noted above (Controller, Controller).

Yes, it is as I stated earlier. You will have now duplicated the association.

Chris,
Could you please explain in technical wording what do you mean, what are the implications of it?
I would also appreciate it if you could add some reference reading material to understand what it means?

EDIT:
Found some interesting doc about the MC association: https://www.silabs.com/documents/login/application-notes/APL12955-Z-Wave-Multi-Channel-Basics.pdf

I can only really refer you to the ZWave protocol standards unfortunately, but there’s a lot in there.

This is what I’m trying to get clarified by Aeon.

This is what I’m trying to get clarified by Aeon.

Did you recieved news from them?

Just bought the same device (1 clamp only), and having the same issues.

Did you recieved news from them?

No - I pinged them a few times after I go the response that they would look at it, but I never got the answer. I’ll try again - normally they are really good, but recently (maybe due to the world situation) it’s been more difficult to get responses.

Hey everybody
I have a problem with this device after I changed the controller and reincluded the device. Before i changed teh controller he send a status change after a change of 5% . Then after the inclusion it did send every half hour with the same parameters. Now after i deleted it and reincluded it again. It doesn’t sent new value’s anymore. It is online and when i reinitiliase the device it does everything it has to do. Here is the log debug node 13 zw095.txt (137.8 KB) . Then if i want to chance a parameter i get this debug node 13 para.txt (722 Bytes) . The XML file is only 5kb network_eeeed13d__node_13.xml (5.1 KB). I have already deleted the device from habmin and the xml file and then search for a new zwave device, but didn’t work.
I run an RPI 4 2GB, openhabian, razberry controller. If i put my controller on a zway server everything works well so i don’t think it’s the device.

Did you solved this,
I’m using a rule every 10 seconds that refreshes the meter. This ‘forces’ him to send over the data…

Yes it is solved… I removed it form the network with z wave.me and included it again I did that by marking the device as failed and then gave it a reset and then click replace by new device… so nothing was changed in my network but now al works great! But Thx for the advice can be handy for something different…

After a lot of testing, reading logs and forum posts as well as contacting Aeotec support I finally got the device working correctly.

Pretty old post but it still applies.
Recently upgraded to OH3 and some weeks later, installed the HEM. Right after the install the readings were getting update only once every 30 minutes or so - found no way to change that. Some days later, after fiddling around in OH, meter readings froze - no more updates.
Installed the Zensys tools today - made the changes in the assocation classes as per you info and - tadaaa - working like a charm now - updated every x seconds as requested.
So even after 2 years, the configuration issue is till there …
Thx for pointing to the solution.

Adding to this thread instead of starting a new one…

I’m having the same issue as many others reported, can’t get this device to update every x seconds as configured.

I had this device working fine on OH 2.5 but when I created a fresh OH 3 system I got the updating issue. Basically excluded everything and added all devices as new.
Device will report values occasionally but not according to the Report Group parameters, 101, 102, 103

I followed the advice of others and used the Zensys tool to set the Association as recommended and remove the Multi-Associations and it did bring some progress but not total success.

@chris , I’m willing to post some logs but wanted to make sure DEBUG logging of the association process is sufficient, or is there something more needed?

Hello, I think i can solve this for you -

I followed this instructions set for zensys

This page provides the steps to download and use SiLabs PC Controller 5 (Zensys Tools 5) as the ultimate management tool with your Z-Stick Gen5 and form part of the larger Z-Stick Gen5 user manual.  SiLabs now offers their Zensys Tools...

It has an issue with Group association, there is one quick way to fix this, is to use your Z-Stick Gen5 manual pair method which should assign the proper group association.
​

​
Alternatively, you can use Zensys tools to pair your HEM Gen5 using similar steps to the above, which should do about the same thing and then move it over to OpenHAB afterwards. “”

I had done thing the first way and it didnt work, so I went the Zensys method (alternative). I plugged the AEON Zwave stick in my Laptop - went to remove + re - add and it seems to configured fully. Now i can play around with all variables. I use 101 at 5 sec intervals with 1794 to get all Wattage and 102/112 with setting for Kwh. all seems to work perfectly now.

Thanks! I’ll give this method a try.

Including from Openhab did not work but including manually from the stick worked.

Thanks for your update,
Just to make sure what is the channel you are using to get the data?
is it “meter_current” ?
Thanks!