I know this is maybe not fully Openhab related and I may even be in the wrong category, if so I deeply apologise, but I would like to get some suggestions for a ‘problem’ I am trying to solve (with openhab).

i have a teenage niece who likes to take long showers. Her father (my bro) whose house I outfitted with a simple openhab system asked me if I could make something that would shut off the warm water to the shower after say 3 to 5 minutes and then keep the water shut off for about 5 minutes.
Well that was not too hard: I use a latched valve with an H bridge, controlled by a Wemos mini. an NTC measures the temperature of the pipe. If that rises above a certain temperature it is registered as ‘someone using shower’ a timer starts and after say 3 minutes the valve gets a pulse and closes. then it waits for 5 min sends a reversed pulse (it is a latched valve) and the valve opens again for normal use. Works well on testing. Great.

The only downside I see, is that the daughter in question, when suddenly faced with cold water, will jump out of the shower (good) but then only turns off the cold water and not the hot water (bad) as that is not running at that moment.
And then 5 minutes later in what I presume to be an empty bathroom: the warmwatervalve opens again for normal use, and finds an open faucet.
Result: no energy and water saved but massively spilled.

Maybe someone out there with teenage kids has found a solution? If so I’d love to hear it

No real idea, but one question.

hopefully this will help you.

Well, interesting solution. Ít’s Kind of an electric circuit. The problem (in my opinion) is that it is one circuit with two switches(electric valve, mechanical fitting) in a row. Both Need to be switched on to get water, just one needs to be closed for stopping water.
The valve in the shower is like a switch and is meant to be used as one.
It could be a solution to rely just on the valve, which of course requires a Switch on the sitemap to enable water. This could be managed by a tablet in the bathroom(humidity Problem not to be forgotten there).

Better: place remote switches (like dash-button, but just water-protected) in the shower, do without the current Fitting(or just leave it always open there) and those Switches can set water on/off. Your timer would control the very same valve. So you don’t have the ‘2 Switches in a row’ problem.

You could start off with such a wireless Switch and do Trials. Just leave Fittings opened and use the Switch as on/off-Switch for the valve.

And your 2nd 3min-timer could be used to reset an internal variable that allows the water to be reopened.
Of course there is the question of how to mix the water, so it isn’t too cold or too hot, but if those valves support a current close-dimming, great.

Why not remove the two separate valves in the shower and add a one that has a thermostat (Stuff like this.)?
More comfort, as you can select the temperature you feel comfortable with and it does regulate that on it´s own. Plus you have one common valve in the show that closes both cold and warm water.
Easy to do, perfect result.
Regards,
Oggerschummer

If possible, don’t fully close the valve. It will be too cold to shower but the hot water will still be running visibly.

Thanks, currently I only check the hotwater pipe for temperature.
Sadly I can only check for temperature, not if the water (hot or cold) is indeed running.
If everything fails, I could of course install a flowmeter in the coldwater pipe, so yes I may have to go that way

Thanks, sadly it is a two position valve. closed or open, but I like your idea

Thanks, actually someone else suggested that just this morning, so yes that is a perfectly good option

Thank you. certainly a possibility

Thanks, it is in fact only one switch that switches the valve on or off. I like to stay away from placing any switches in the bathroom coz i want it to be all automatic and not give my niece the possibility to just lengthen the shower period by some buttons, better even, I do not want her to have the idea it can be regulated at all

Thank all of you guys: I think I’ll advise my bro to install the thermostat faucet, seems the easiest solution

Why not simply measure the time she showers and for every minute longer than the agreed maximum the wifi connection on her phone will be blocked for an hour.

Anyway, I think home automation can do a lot of things, but raising kids is not one of them (yet).

I dont have the illusion this will raise a kid, but at least it will keep showering under control

What if instead of shutting down the hot water for 5 minutes, you toggle it on and off on a short interval lets say every 20 seconds for the 5 minute period. That might make it too uncomfortable to remain in the shower but enough to serve as a reminder to turn it off. Of course if the hot water temperature is set dangerously hot, this could be a hazard if the cold water gets shut off and the hot water only continues to pulse on and off. Many modern shower valves include the ability to set a maximum temperature to ensure safety.

Thanks. Actually that is not such a bad idea either (both). Definitely food for thought.

As my bro (whom I am doing this for) wants to keep his current faucets, the easy solution of thermostat faucets is out of the windowand some replumbing is necessary anyway, this is definitely a possibility

I know you get the idea already, but I thought it would be fun to illustrate it in a drawing 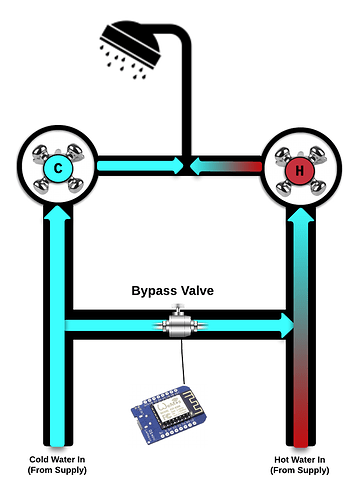 I think this is the simplest solution and only requires the hardware you already have. Just reconfigured a little bit and some logic changes in the software.

indeed yes, got the idea and your drawings are excellent. Had thought about the two way solution as well. It is a latched valve that needs reversed polarity signals to toggle it’s stste, so I use a motordrive module . That has a few connections to spare. Although… could just feed them from one outlet as their action is always ‘reverse’

Though I think thermostate taps are the easiest, that is not possible for ‘cosmetic’ reasons, so then yours is I gues the most secure with regards to ensuring the tap will be closed.
Thanks for the drawings. Really good and they come in handy explaining it

How about a different solution entirely - turn the lights off after five minutes.