All of a sudden, OH2 was not working anymore. I could ping the RPI, but no SSH, no VNC, nothing else.
Restart and monitored, Influx took all the memory. I shut down OH and grafana and restarted Influxdb. Took some minutes then memoryusage of influx increased.
To help out, I increased the size of the swapfile to 1GB (it’s on a SSD). Now it’s working, but that is not a solution (see screenshots).
In the log of influx I see that influx is opening all the WAL files. why?
What can I do to get back the 100MB influxdb used to take?
Thanks! 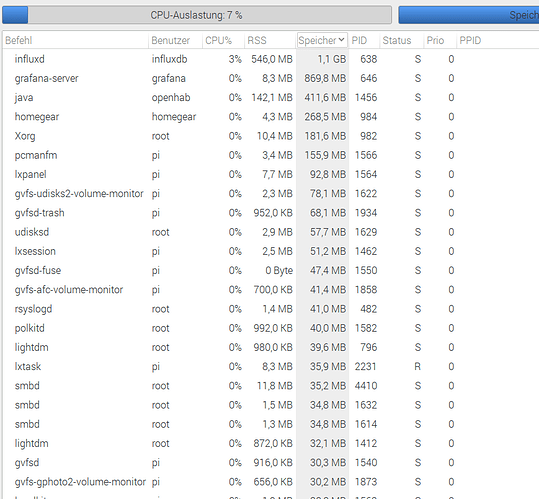 O.K., took me some hours but learned a lot about influx. The Problem were not the WAL files although they were that big, it was the corresponding data-files. They had the owner root instead of influxdb. I changed it, influx took some CPU and the WALL-files are gone.
But the cool thing is the database of Influx. I ploted the heap and you can see, when the mess started. It was at 1:30 during the night. Not sure if I was still working on it (obviously must be)

I think I have the same problem, so I am curious about your solution.
Can you elaborate on the actions you took to solve it.
Which data files did you change the ownership of?