Something I came across and wanted to share it with the community.

I have 3 Ubiquiti access point in my house.they really work great; have WiFi coverage all over the place, and is of high quality.

I recently bought 4 Blitzwolf BW-SHP6 (3450W). They come with the generic ESP8266 chip onboard. Unpacked them and downloaded the smart home app (uses tuya protocol), and started using the smart wall plugs. The website told me that IFTTT availability was present. So far, so good.

Well, IFTTT support was not there, but hey…we have openhab…right…?

The tuya protocol scares me: settings, when to do a switch, are stored on a server on the internet; in this case a chinese server. Dont like this…at all. I dont want ‘somebody’ regulating the switchmoments in my house. And…what else is on the smart switch…?

Paranoid ? Maybe, but when doing smart HOME, I’d like to loose max dependencies with others. If the site is down, my light will stay off.

I flashed the Blitzwolf’s with TASMOTA, and after that ESPHome software. This firmware makes the switch MQTT aware, and can be adressed by my lovely openHAB server.
Cool, but now the part I want to warn you about: the ESP8266 has unstable wifi routines, that causes problems on my Ubiquiti AP’s. There are many reports on the Internet about this.
My APs were sometimes blocking the plugs…

So be warned if you ever want to use these plugs.

Well, IFTTT support was not there, but hey…we have openhab…right…?

Yes, it is mentioned all over the place here. That was turned off because people abused it adding all their Items and crashing the server. You are free to setup your own server based off the freely available code though.
myopenhab sponsor is forbidden from charging for access and does not have the resources to expand server capabilities.

Actually my main concern is the fact that the ESP boards can be a security hazard, and disrupt my beautiful Ubiqiuti setup.

So these switches are worthless to me.

I use some of these too. Flashed them with Tasmota and don’t have any issues with them. I don’t have any Ubiquiti devices tho, I’m using Fritzbox. I don’t see how the device itself could cause a security hazard due to “unstable wifi routines”. That would be a software/firmware problem, not a hardware problem. I had some issues with Tasmota devices caused by using core 2.4.x, but those were mainly wifi connection issues. With 2.6.x that’s no longer the case.

The “unstable wifi routines” are being mentioned on other websites. What I see is the following:
In the Ubiquiti management GUI the switch is flipping (ON-OFF-ON-OFF), visible through a red 0%, then a green 40% (for a few seconds).
Also I see the increasing errorcount: 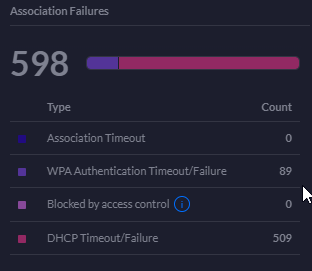 The DHCP server is on my FritzBox (7590). The counters were increasing, until the point I unplugged the switches.

By mentioning a security hazard I mean that I have installed devices from abroad in my home, and I donot know exactly what they are communicating to a foreign website. The generic ESP module could be exploited to gain access to my homenetwork.
There never was one option or question that I agreed with this communication. That bothers me and find it suspicious.

We all know, that the “s” in “IoT” stands for “security”, but I don’t see an issue with the mentioned Blitzwolf switches here. You flashed Tasmota on them and they communicate with your MQTT broker. They may access an NTP server from the internet, if you configured one. But again, that is not an issue with the Blitzwolf switch, but with the firmware you use for your esp8266. So in your case you can throw out all devices that use 8266 and any other wifi connected devices.

So in your case you can throw out all devices that use 8266 and any other wifi connected devices.

It’s probably that many folk use this class of device with Tasmota without issues.

I note your difficulties seem to flag as DHCP problems. Maybe they’re commonly given fixed IPs and that isn’t used.

I don’t think this is a ESP8266 problem, cause i have also 3 Ubiquiti APs (dhcp done by Fritzbox) and many devices with ESP8266 (sonoff, blitzwolf, selfmade ESP8266 devices, … ) running in the wifi.
But i don’t have much failures shown in my unifi manager

I have 1x PRO and 2x MINI. Especially with the PRO I saw the majority of the issues.
Good for you that you dont have the same issues as me.

@rossko57 I used static IP for the Blitzwolf switches.

@Dave_K I will not rule out the option…

I used static IP for the Blitzwolf switches.

Yet you complain of an increasing DHCP error count. Something’s got it’s wires crossed, somewhere.

The following is off-topic for this forum since it does not relate to openHAB, but rather to DHCP & Networking.

If the static ip used it within the scope used by DHCP I would expect it to complain. Static addresses need to be ONE of the following configurations:

I think you use one SSID with 2G & 5G and that’s may your problem. Use for the ESP8266 a separate 2G SSID and you will have no problems.

Gonna give it a try !

I think you use one SSID with 2G & 5G and that’s may your problem. Use for the ESP8266 a separate 2G SSID and you will have no problems.

I have 4 Unifi AC-PRO AP’s in use. For low-level IoT devices, like the ESP8266, I have setup a separate 2G-only SSID, just like Marcel.
No issues, so it hopefully works for you as well.

I have created a seperate 2.4 Ghz SSID for these purposes. Looks stable to me

I will refrain myself from replying to comments about security: google provides enough answers.

I have 4 AC nanoHD in my house and I spent days to get everything stable.
At the end, each AC has it’s own 2.4Ghz SSID for " IoT" (but all share one SSID for 5Ghz “Home” ). That made everything stable. (and of course deactivate all the “features” in Ubiquity software.

I’m running some ESP8266 devices e.g. to collect temperature and humidity data published via MQTT. I’ve a dedicated 2.4GHz SSID. Most of them are Wemos D1 minis with ESP Easy firmware. and I don’t have stability problems. Here is an example: