My lights are controlled using HSL not HSB!!

I dont think it is possible (or at least not easy) to convert HSB to HSL in OpenHab. If I may ask what LED do you have that it reacts to HSL?

I am happy it helped you

You know what, the more reading I do the more difficult this becomes. It appears it is not my lights that are the issue but what I’m trying to do them.

The lights are connected to SmartThings and I’m trying to use the MQTT bridge to connect them to openHAB.

After much research it appears that SmartThings uses an odd method to interpret colours. It’s defiantly not RGB I know that much but I’ve seen some people say its HSL and others HSB but both of those have a Hue value up to 360 but SmartThings is 0-100. I wonder if the range has just been compressed to get that figure but I’m struggling to get my head around it. (article i read on ST forum https://community.smartthings.com/t/getting-philips-hue-values/2602/23)

I’ve just ran a test and it appears that the hue value has been compressed to fit within a 0-100 range. I just divided the a hue value by 3.6 and entered the number in my MQTT client and the colour is what it should be.

Creating a rule that takes the Colorpicker “hue value” and divides it by 3.6 is over my head though.

The following is adapted from @bob_dickenson’s on the big Design Pattern thread. I’ve simplified and reformatted the description to better follow the other Design Pattern articles I’ve posted. I highly recommend looking at the original for a very good practical example. Problem Statement Often one faces one or more of the following situations: the need to perform additional logic before sending a command to a device the need to send a command to multiple devices based on a single event the …

Thanks very much, I’ll give that a good read!

Apologies for posting on two threads. I believed this issue had ended and started a separate conversation but it appears they where part of the same problem.

You shld definitely read Rich’ link regarding programming. But separate from the I tried to find out what the exact colorformat of Smartthings is, some sources suggest it is ‘hue’, ‘saturation’, ‘color’ which does not really make sense to me.
If you change the hue value by dividing it by 3.5 does that just give you the right color or do you then have right color, saturation and luminosity/brightness?

HSL and HSB or HSV color models are just intuitive ways of specifying RGB colors. Simple equations are used to convert to and from RGB.

@Kees_van_Gelder from what I can tell “hue” & “saturation” make up the “color” value and the L refers to a “power level” value rather than “color lightness”. It appears that people refer to the colour as HSL which is incorrect as the L does not stand for “lightness” at all. From what I can tell colour is still in HSB and the B is a power level value which would make sense as that would control the brightness of the lights. I hope that makes some sense… my head hurt just writing this!

This is going to make my rule a bit more complicated too as I need to post to two MQTT topics “color” and “level”. So I have to grab the Colorpicker values convert the the H add it to S and post to “color” and then grab the B and post that to the “level” topic.

This is the code from the ST App

So I’m going to try and create a rule that does the following: 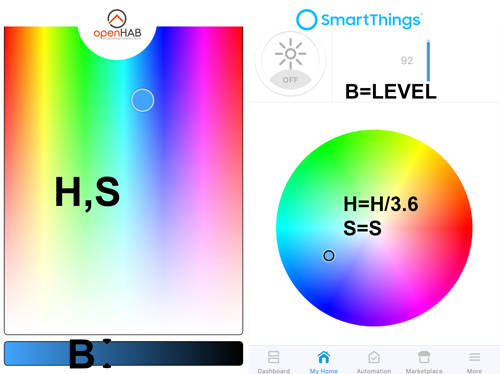 I knew there was a good reason I stayed away from HSL, though I have a routine that makes RGB out of it (but you need the reverse)
The code you showed is actually what got me durprised earlier as in 'hue, saturation, color, but I guess they make the color out of hue and saturation.
Anyway, I dont think I can be of any further help, but should you fid a solution I’d be happy to hear it just in case/for future use
Good luck

Interesting. My impression was that HSB and HSV indeed are basically the same (as they say) and HSL and HSI are the same too (HSI is not mentioned)

Absolutely, knowing the problem is a good start, I “just” need to figure out how to write the rule now and will post the solution here when I get my head around it.

Going to start by taking a Lynda course on Java 8 as I have 0 coding experience so feel that would be a good start.

I’ve spent the last couple of days beginning to learn Java and Xtend and I’m struggling a bit. I’m simply trying to split out my HSB into separate variables so I can do what is mentioned above.

From my limited 2 days experience I think it is a parsing issue as I’m dealing with a Decimal but I’m using an Integer. To be honest I’m lost. If someone could just nudge me in the right direction that would be great as I keep going round in circles.

Here is my rule:

And the error in the openhab.log?

Are you using ESH Designer? One nice thing it has, especially when you are first learning, is <ctrl><space> to offer valid ways to complete the statement you’ve started typing. So if you typed Deck_HSB.<ctrl><space> it will give you all the methods available on State.

So I’m going to split this into two parts. First how to figure out what is wrong with the code you have, the other a better way to do it.

First, whenever you have such problems logging is your friend. Log each numSplit.get before you try to parse it. when you do log it, wrap it in quotes so you can see if there is any white space or other non-parsable characters which would prevent parseInt from successfully parsing the values.

As an aside, since you know that numSplit.get(0) represents the hue, it is far better to name that variable “hue” rather than “first” which really is not very informative. It is much easier for you, future you, and others to understand code when you use meaningful variable names.

And now for the better way.

On the other thread where you brought up parts of this issue, back when we thought you needed to convert the HSB to HSL I posted the following code:

As you can see, you don’t need to parse the .state.toString at all. You can get at the raw primitive value for each directly.

To discover what those methods are you need to visit the ESH Javadocs, look at the code itself, or you can do what I do and use ESH Designer and just type <ctrl><space>. Soon the VSCode plugin will support this I think too.

I applaud your willingness to learn how to do this stuff and that you are not just asking us to do it for you. But don’t spin your wheels too long on your own. We are happy to help!

And the error in the openhab.log?

Are you using ESH Designer?

Yes, I’m using it but not quite got to the stage where I can begin to write things correctly in the first place

Log each numSplit.get before you try to parse it.

I did try this after I posted and noticed that my problem happened before the parsing section.

when you do log it, wrap it in quotes so you can see if there is any white space or other non-parsable characters which would prevent parseInt from successfully parsing the values.

As you can see, you don’t need to parse the .state.toString at all. You can get at the raw primitive value for each directly.

Oh I see now. I was a bit confused with the HSBType, I incorrectly assumed it was only useful for converting to HSB to RGB. I think I am beginning to understand now.

I’ve just tried again but for some reason I’m still not getting a result.

I applaud your willingness to learn how to do this stuff and that you are not just asking us to do it for you. But don’t spin your wheels too long on your own. We are happy to help!

Thanks, I really want to understand how to use openHAB fully so am very willing. I do love this forum as it is very helpful due to people like yourself but I also like to try and figure things out for myself as however painful, it is a good way to learn… well until I start going round in circles and pulling my hair out

Odd, I thought that Hue was an integer. Guess I’m wrong. That is the source of your problem. You cannot parse a floating point number string into an int.

Well, that’s not a helpful error.

Interlace log statements after each line to see which line it is failing on. Does Designer mark any of them as having an error?

Interlace log statements after each line to see which line it is failing on. Does Designer mark any of them as having an error?

The designer seems happy. I tried the above and got the same error then commented each block out one by one and still the same error. I guess that means it fails on all? See below:

I also tried adding a log statement just after the “then” and got the following:

Does any of that info help?

Make the first line of the rule a logInfo to log out the state of Deck_HSB.