I am running several HmIP-BROLL Rollershutter actors.
All is working fine. I am able to controle the shutters via openhab.

Now i wanted to use the “action” of pressing the switch on the wall to switching off an automatic driven by my rule.

I tried to add Items for ‘Press Long’ and ‘Press Short’ as well as for ‘button’ too. But if I am pressing the wall button this is not recogniced as a press of the item. The rule do not know that it should run.

Any ideas how i can identify a wall button press into openhab? 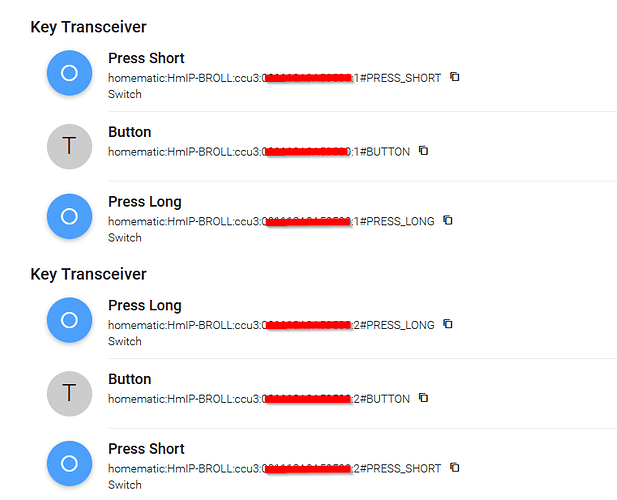 Could you post your item definition and the event long on a BROLL press?

This is the entry in my items conifg file (testwise):

The event long I did not take into account (maybe I have to consider for my rule too) but it would be similar to above lines.

I am able to “press” the virtual switch and the shutter is driving but the oposit way, pressing the wall switch and recognizing it in OH is not.

Thats why I asked for the log file.
If you don’t see the channel action in the log, at the moment the button is pressed, then your problem is with the CCU, not with openhab.

The CCU distributes any wallswitch action, only when there is a rule for the particular channel living inside the CCU rule engine. Thus make sure that for every button you have created an empty rule inside the CCU as following:

If this is set up properly and the log shows the BROLL channel action, then please show your rule.

I guess I understand the point.
The Wall button exists in openhab but is not connected to CCU (it is grayed out).
If I am understanding your CCU rule correctly then it is doing (more or less) hat I want to realize with an openhab rule.

Is there a way (ok I know it is normally a question for a homematic forum) to define a rule in CCU to forward the pressing of a button to a kind of button/switch/variable to openhab.

I have no experience with CCU programming, sorry.

OK here we go with a little step by step:

There you go - check the log file - button press events shall now be recognised by openhab.

Going forward you can create your items and rules in openhab as you are used to.