I have connected my PowerSeries DSC Alarm panel to OH3 through use of an ESP32 module as described here . Works like a charm.

The inconsistency comes in with the gate.
I have a two limit switches which senses if the gate is fully open or fully closed. This is linked to a ESP32 which talks to MQTT which talks to OH3 - standard design for these type of equipment. 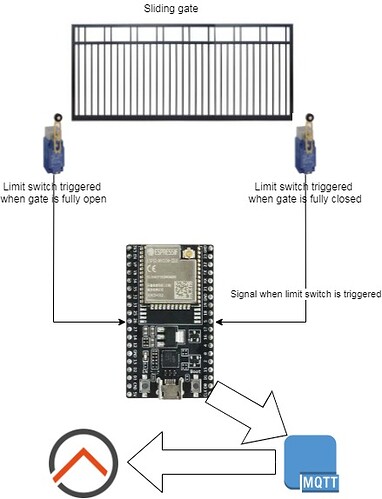 However, if the gate is fully closed and I say: “Ok Google, close the gate” then
GA responds in saying: “Sure, closing the gate” but this incorrect since the gate is already closed.

I would like to have a similar behaviour between gate and alarm. If the alarm is disarmed and I give the disarm instruction I am told it is already disarmed. Likewise, if I instruct the closed gate to close, I want to be told that it is already closed.

Not sure how to share my gate and alarm setup in OH3 with you guys, but any pointers on where I can start investigating would be much appreciated. If this is documented and I have missed it, happy to get a pointer to an URL as well,

Thank you in advance.

However, if the gate is fully closed and I say: “Ok Google, close the gate” then
GA responds in saying: “Sure, closing the gate” but this incorrect since the gate is already closed.

This is just how Google Assistant works. If you ask it a question, it answers. If you give it a command, it says that it’ll carry out the command and then does it. So it’s not incorrect, because Google is actually sending a command to close the gate, and you should see it in your log as a received command. OH also isn’t smart enough to reject the command. It just passes it on, and nothing happens since the gate’s already closed.

I imagine we might see this down the line, as there are many ways in which the Assistant AI could be improved.

Security Systems are currently the only device types that support checking the state before firing a command. This is not a configuration issue but a (known) limitation of our Google integration.

It might be possible to implement this also for other types in the future, but for now you have to live with that behavior.

This is not a configuration issue but a (known) limitation of our Google integration.

Is the limitation in the OH implementation or in Google’s API? I just assumed it was the latter, but now that I think about it I can only test with OH items.

There is nearly one for every case.

We currently do not check the state and just “fire and forget”.

Oh, cool. But yeah, that would be a lot to implement considering how many device types you’ve added.

Awesome thanks for clarifying

@rpwong Surely one won’t need these responses for every Item Type. If OH can do switch, contact and maybe dimmer, then most scenarios will be catered for - not true?
JB

Surely one won’t need these responses for every Item Type.

Then we’ll eventually get people asking the same question that you are, because it will still be inconsistent. Lots of people use fans, blinds and TVs, and they might feel differently about what would be included in “most scenarios”.

Ultimately it’s up to Michael to decide how much time to put into it and how “complete” it needs to be. I don’t have the programming skills to help, but if you do then I’m sure it’d be appreciated.

As we already have some code in place for the Security System, I will have a look if we can “easily” adapt this for other device types.
But definitely no ETA for this

I figured out a quite nice (and generic) way to provide such error messages and proposed a solution in https://github.com/openhab/openhab-google-assistant/pull/319

Awesome. So, GA will know to respond with “locked/unlocked”, “on/off”, “open/closed”, etc. based on the device type?

Yes, but as stated only for devices where you explicitly tell to do so by adding checkState=true to the metadata to save API calls when not needed.