Im looking for an smart enough AC Motor speed control. My plan is to use it for ventilation in my home. Features that i would like are:
Remote start/stop
Remote set speed/set point
230 VAC for the motor.

Protocol is not important aslong as it integrates with openhab =)

It need to be a proper speedcontroller not just a dimmer (that chops the waveform).

I have been searching around some but not found anything.

Availability in europe is ofcourse a big plus

Please tell me when you find a solution to this. I bought a cheap chinese made ventilation heat exchanger some months ago, but have not found a good solution to control the fan.

The closest I have found is Qubino - ZMNHSD1 (https://www.tronika.no/no/lysstyring/961-dimmer-zmnhsd1.html) that supports a 100W mono-phase asynchronous motor, my fan motor max out at 123W. I think this would work on my setup with some extra cooling fins, but this is only a guess, I have not had the time to test. 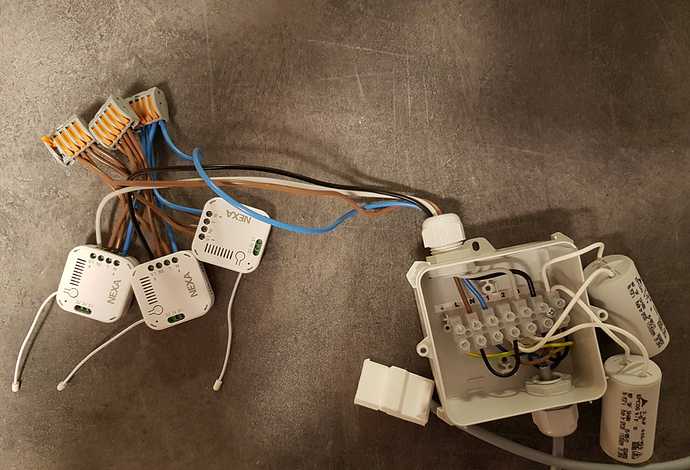 If you want full control without the regulating noise of a dimmer, you need a much more costly frequency converter, which you probably end up programming to 2 or 3 speeds anyway.

Yeah I know i only need one or two levels and that using fixed components is an option.

The drawback of the fixed components is that its much more difficult to tune the fan speed for minimized noise.

Ill look into the Qubino maybe its an option. Im generally sceptical to dimmers they are rarely the right fit for motors - wrong tech in the circuit.

If any dimmers can do it, my bet is on the Fibaro Dimmer 2.
It does a load analysis after power is applied.
If that is still too noisy, frequency converter is the way to go for full speed control. Many of them have a 0-10V input that can be connected to a Qubino 0-10V dimmer.
For more discussions head over to FB group ‘Smarthus & IoT Norge’.
https://www.facebook.com/groups/smarthusnorge/

It’s a closed group, but they will admit you upon request.
Goggle translate will translate from Norwegian for you.
Check out this post for a frequency converter solution:
https://www.facebook.com/groups/smarthusnorge/permalink/1267766533338090/

I think ill look for a frequency converter. I have a lov voltage dimmer that i didnt use for another project. Im not to keen on fibaro, they were tested by our electrical safety department here in sweden and it was a mayor failure - firehazard.

I use the Insteon FanLinc for a ceiling fan. Not sure if this works for your application:

I just recently exchanged the fan in my Heat Exchanger, that got noisy as I forgot to switch off the exhaust while the crew was polishing plasters.
And i have that unit right in front of me 230V 0-10V control.
When you dont kill it the fan is really quiet and outputs >600 m3/h

For the the 0-10V output from OH2 you can use Tinkerforge bricklet that does have a binding.

Ok cool. I¨ll look into that.

Thats both fan and controller in one package right?

yep it has 2 connectors one for AC other 2 pin for control. Short leads with connectors are in the package.