Touch switch with led, responding to the output state of relay

Here I’m sharing my experiments with wemos D1Mini/ Node MCU with tasmota firmware installed in it and LED Touch Switch.
I have seen a video in Youtube by Dr.Zzzs showing how to install a touch switch LED to a sonoff basic flashed with Tasmota firmware. I tried the same on my wemos D1 Mini.
But I found that the built-in led responds only when we use the touch switch, it won’t respond if we use openhab/alexa/siri/google assistant.
So I did some modification(hack) to the touch switch as follows:

Now everything working perfectly as I need. Now the LED responds to My voice commands. I hope this may help some of you looking for touch switches in their projects. 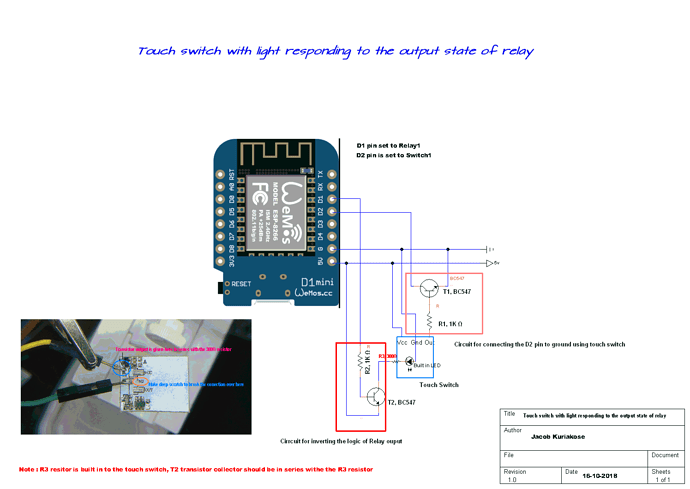 What are the tasmota settings, please?
And can you share the associated items
Also, a video would be great.

I will make a video soon.

@jacobkuriakose thanks! I planned on trying the same thing but hadn’t got around. Glad to know it’s possible!! Thx! I have a switch hooked to my sonoff but wanted it lit when off vs on.

If you are planning to do this with a sonoff please follow this video by Dr.Zzz

You gave me very good direction in this small challenge.

I have some alterations though, that makes everything a bit simpler.

Just scratch the copper directly under the 300Ω resistor (see picture). The copper runs from the right side of te resistor to a VIA in the PCB, half under the black plastic of the 3-pin connector.

Connect the right side of the 300Ω resistor to D1.
D1 outputs 3.3V when ON/HIGH and the 300Ω resistor protects the LED.
Pull-down D1 to ground and assign D1 as a Relay or Relay_n (software based inverted logic for the led)

Also you can pull-down D2 to ground and assign D2 as Switch_n, to accept the 3.3V that the OUTPUT pin gives when the switch is on.

Everything else (the transistors) is not necessary (anymore).

Do the following in Tasmota web GUI Console: 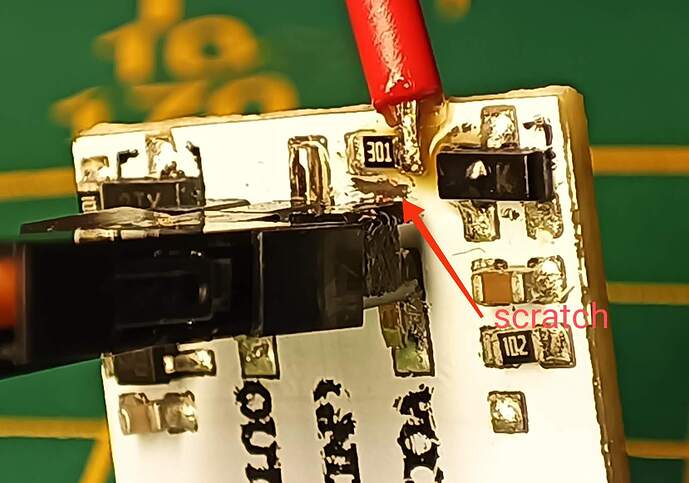