I have OpenHAB MQTT configured and receiving MQTT messages publshed from espeasy is working fine.
However I would like to trigger an event in the rules by publishing to the espeasy device, but I cannot seem to get this working - most likely because the payload format is incorrect. 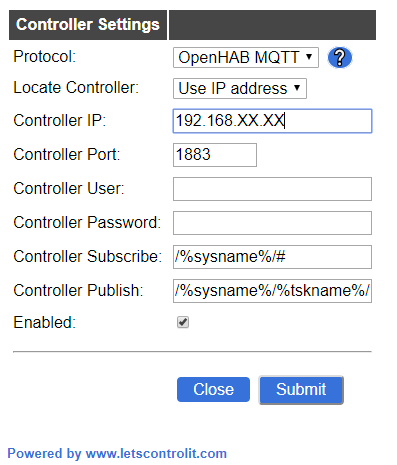 My simple rules event that I would like to trigger to update the value of a dummy device:

I have checked that this works when using normal http triggering, ie. http://ipaddress/control?cmd=event,receive_event=%eventvalue%

According to the espeasy command reference I need to send the following:
“MQTT subscribe template/cmd” with payload “command”
From http trigger I have the “command” is “event,receive_event=%eventvalue%”

Question is now how to format the command payload for the MQTT publish command, such that the event is triggered with the right value. I have tried different versions of /ESP_1/cmd event,receive_event=5.00, but this is not working…

Any ideas?
Thanks for your help