Not sure why it worked the first time right off the bat, but not now. What am I missing?
Thanks

I don’t run on Windows so can’t comment too much on why it is not starting for you, but I can say that it didn’t work with JDK 9.1 because OH doesn’t run on Java 9 yet. You need to stay on an 8 version of Java.

The error sounds to me like it can’t find your Java. You did set your JAVA_HOME but did you at a minimum restart your cmd or powershell window after changing the variable? Environment variable changes do not get picked up by running cmd and powershell windows. Furthermore, I recall on occasion needing to restart explorer.exe or logging out and back in to get changes to environment variables to be picked up properly sometimes. This was back in Windows 7 days so I don’t know if that would still be the case with Windows 10.

Are you running start.bat from the root or are you incorrectly running it from runtime/bin?

Thanks Rich. I did actually end up backdating to JDK 8 with no change. I not only restarted the powershell window, I restarted the machine after each change. One time I even shut down the machine, and then started back up. I’m sure it’s just something stupid, I’ll give it another shot tonight. 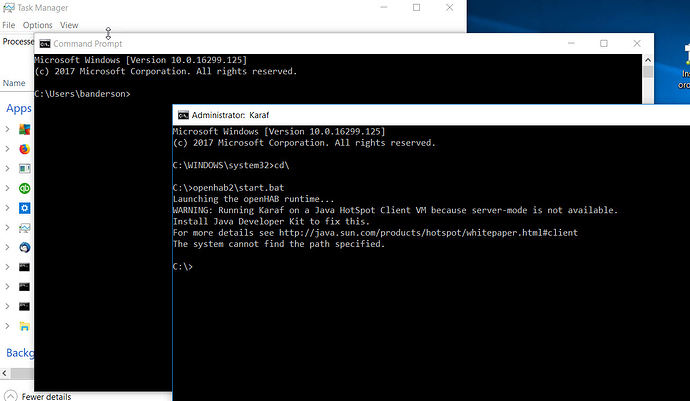 First try cd openhab2 then run .\start.bat. And if that doesn’t work, just to check: What is the output of java -version?

A series of java issues. 1st, I downloaded and installed JDK9.1 which is not compatible with openhab2.

I then backdated Java to JDK8.1, but absentmindedly installed the 64bit version. My system is 64 bit, and I had read that I should install 32bit Java, but glazed over at install time.

Removed all Java versions, installed JDK8.1 and now Openhab is running.
Thanks for the support!

I run 64bit Java just fine actually. Good to hear you’re up and running though.

Try to remove the JAVA_HOME variable in Windows and restart the server using the .bat file.
You’ll get al least two errors, but the server will start.

Heh. Thanks man. No way to try. I ditched it all a few weeks after posting. Obviously it’s way over my head. I went with something more user friendly, if not as well featured.