I discovered, that the Z-Wave binding treats/discovers the Eurotronic Spirit as Unknown Device lately. I can’t tell since wich version it is that way. I discovered this behavior with the 2.5.11-1 (Release Build), wich I installed today. Also I tried the 2.5.12.202012141658 Snapshot of the Z-Wave binding with no difference to me.

I wanted to change a configuration setting of one of my Spirits and discovered in Habmin, that all of them were grey with a delete button. I have not discovered any disfunction on them so far.
Since I thought there might be a change in the binding wich needs to remove and redetect this devices I deleted nodes 25 and 28. Then I started discovering in Paper UI. The nodes were discovered directly, but only as Unknown Device. I added them again and hoped it will change, but they are still Unknown.
If I look at the properties of the Unknown Device, it looks somehow alright to me. I have no idea, why it’s not discovered anymore in the right way.
Somehow strange in my opinion is, that I can not find anything about node 25 and 28 in the zwave.log. I see conversation with the nodes I did not delete so far, but not with the readded ones, even during the adding of node 25 there is noting about it in the logs.
During restart of openHAB and before adding node 25 again I found an entry in the openhab.log about node 28:
2020-12-15 18:17:30.786 [WARN ] [pse.smarthome.core.thing.internal.ThingManagerImpl] - Initializing handler for thing ‘zwave:device:zjarvis:node28’ takes more than 5000ms.
But I don’t know how/if it is related to the problem.

Grey things with delete button and properties of readded node 28: 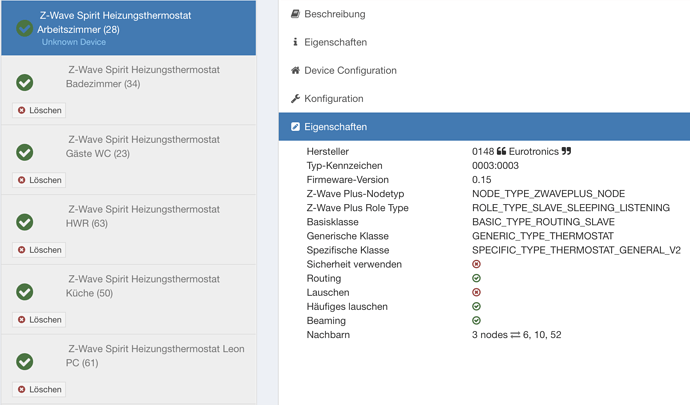 Properties of node 25 in Paper UI: 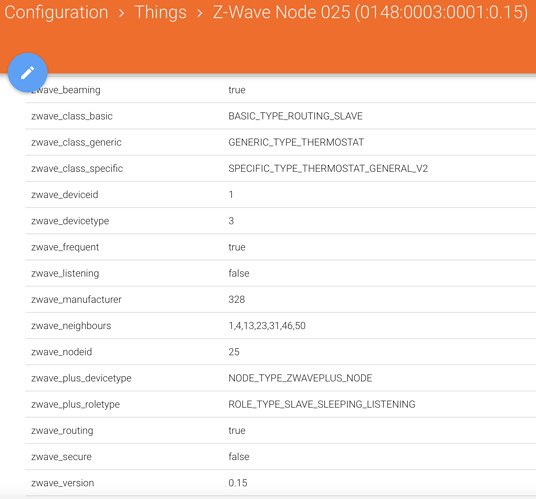 Properties of node 25 in Habmin: 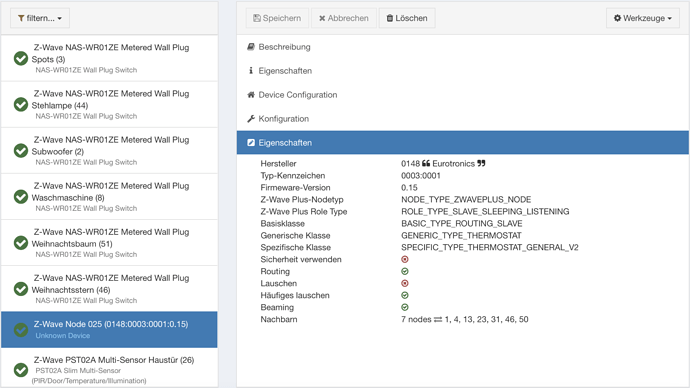 Any ideas on this problem?

I have exactly the sam problem. I have only one of these devices. It just stopped working and cannot re-add it anymore.

and don’t know what to do with it.

Device is in database and it was working just fine but stopped. 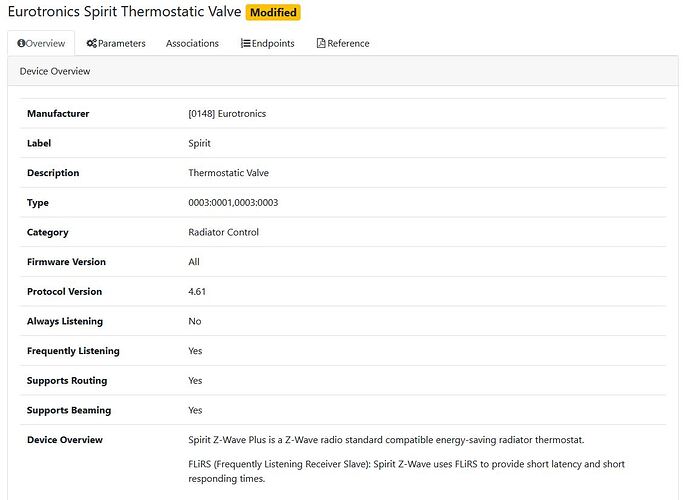 Acording to this openHAB 2.5.11 there were no changes to z-wave binding.

Maybe someone can help with it.

thanks for this information. So you are conforming it was fine in 2.5.10.

I found this also discussed in an oh3 thread: https://community.openhab.org/t/oh3-z-wave-is-it-possible-to-force-reinitialise-devices-without-re-pairing/107556/58
Seems more like a database problem, than an binding problem, as far as i understand it.

@chris wrote there was a new build this night. I had no chance to check it so far. I will try later.

Yes, it works fine with 2.5.10. Also note that the 2.5.11 for the already configured devices does not allow to set any configuration parameters - neither via PaperUI nor Habmin…

I could confirm, that (@chris) tonights build of the Z-Wave binding solved the problem. With Snapshot 2.5.12.202012160333 the Eurotronics Spirit are working as expected.

there were no changes to z-wave binding.

There were database updates. They have quit listing them in the Release Notes.

Thanks @icsat for that information.

Could you tell me how to implement snapshot version of the binding?
Did you you get it from: openHAB2.5.x-ZWave ?

Is it [SOLVED] Link to Zwave binding SNAPSHOT 2.5 correct way to upload it?

Could you tell me how to implement snapshot version of the binding?

The easiest way is usually this script.

A number of people have run into trouble performing manual installs of the Zigbee and Z-Wave bindings. A manual install (dropping the jar into addons) is rarely needed, but some people prefer a manual install over apt-get, or want to use a stable OH release with a recent Zigbee or Z-Wave binding. Here is a script that will hopefully make it easier to install, upgrade, and uninstall these bindings, and prevent some of the common issues. Who would benefit from this script: Anyone wanting to tes…

Could you tell me how to implement snapshot version of the binding?
Did you you get it from: openHAB2.5.x-ZWave ?

Yes, that is where i got it from.

Is it [SOLVED] Link to Zwave binding SNAPSHOT 2.5 correct way to upload it?

I would prefer the way @Bruce_Osborne pointed at.

Personally I uninstall the Z-Wave binding by Paper UI manually and put the jar-File into the “/usr/share/openhab2/addons” folder on my Raspberry Pi using my own restart-script.

Personally I uninstall the Z-Wave binding by Paper UI manually and put the jar-File into the “/usr/share/openhab2/addons” folder on my Raspberry Pi using my own restart-script.

That works unless there are uninstalled dependencies. For instance if somebody uses the script to install the 2,5 snapshot on .4, it also installs the missing dependencies automatically.

you are right. Thats why I answered:

I would prefer the way @Bruce_Osborne pointed at.

Thank you guys for your help. It is working now on snapshot binding.

Now binding is present in karaf console but not in PaperUI.
How it will look like when new version (2.5.12) of OH will come out?
What steps should I take when upgrading?

Now binding is present in karaf console but not in PaperUI.

That is expected for manually installed bindings.

How it will look like when new version (2.5.12) of OH will come out?
What steps should I take when upgrading?

If history holds true it may be wise to restart OH enough to get it stable before installing the binding.

What steps should I take when upgrading?

If you used the script to install the binding, then use the script to uninstall too, so that the dependencies are removed. These are additional jar files downloaded to the adfons directory, so you could just manually delete them too, but that usually requires at least a reboot, but you may need to clear the cache too.

Any chance this will make it to a stable build anytime soon? Since I´m a OH beginner I´m trying to avoid messing around with snapshots. Thanks for your help!

Any chance this will make it to a stable build anytime soon?

It can only make it inot a stable build when there is a release - but it will be in the next release.