I’m using OH 1.7.1 currently and have installed a couple of different Z-Wave sensors in and around my house. I’m pretty happy with the functionality of OH and so far everything worked like a charm. When I was investigating an option to install toggle switches in my house I came across an interesting article (http://www.sensorbender.com/2015/11/08/wechselschaltung-ohne-com-link-mit-fibaro-switch-schalten/) that exactly fits to my situation. The article is in German but the drawings should speak for themselves.

After I included the FGS-222 via Habmin I identified the parameters #7, #13 and #14 and changed them to fit to the proposals from the beforementioned article. Since this didn’t work I had a look at the ‘manual’ (http://www.fibaro.com/manuals/en/FGS-222/FGS-222-EN-A-v1.01.pdf) and found that parameter #7 is described as Parameter No. 7 – Sending commands to control devices assigned to 2-nd association group (key no. 2) which is quite different from what the current fgs222.xml is telling me for param #7: Control key #2 behaviour.

I did a number of tests on my desk with a different parameter sets but wasn’t able to configure the toggle switch functionality. Important might be that I only did test remote control via OH and not with a real switch but this shouldn’t make a difference. I tested everything with the 1.7 and 1.8-snapshot zwave binding.

My questions are is the current fgs222.xml wrong and needs to be updated? How can I contribute something useful to that?

Has anyone else configured a toggle switch with the FGS-221 or FGS-222 successfully?

I’ve just updated fgs222.xml (because I had already made the same change for fgs-221 earlier, but had forgotten about fgs-222).
If you want to contribute, you’re welcome. Get a GitHub account and access the latest files from the “openhab/openhab” repository there. Via GitHub you can change source files and create ‘pull requests’ to have your changes be reviewed and, if they’re ok, integrated back into openhab repository.

On your issue, yes, I’m successfully using FGS-221 and FGS-222, to configure toggle type switches set param 14 to 1. That one’s description is correct, although not identical to Fibaro’s docs. ‘Toggle’ is the same as ‘bi stable’, and ‘momentary’ means ‘mono-stable’ (I know it’s hard for Germans, feel free to call them ‘Schalter’ and ‘Taster’ :-)).

thanks for your answer and the Github hint.I already created a clone.

I just would like to reconfirm that we’re talking about the same use case here. My real issue is not to configure the mono- or bi-stable switch in param #14. My problem is that I would like to have both switches behave as one single switch. Basically I would like to achieve the following functionality:

This would be necessary to have a clean solution for a so called ‘wechselschaltung’ (in English it should be something like multiway switching.

According to http://www.sensorbender.com/2015/11/08/wechselschaltung-ohne-com-link-mit-fibaro-switch-schalten this should work but I still wasn’t able to find the right configuration settings for habmin.

Well, I don’t quite catch the point of that URL why you would want to do that at all. Sounds like an electrician’s approach to an IT problem.
To start with smart home lighting is a good opportunity to rethink your switching concept. In the end, you won’t keep all of the existing switching logic and switch locations anyway, because you discover there’s now better ways of doing things. So think of a new use concept first, and then think of a way to implement that with minimum wiring changes.
Wherever I kept my ‘Wechselschaltungen’, I moved to momentary switches (‘Taster’) and used either one FGD (it allows to attach two switches) or the secondary input on another FGD for the second switch (and you can simply connect even a third and fourth). Granted, it sometimes does not work well without changing some of the wiring (if you’re missing the neutral wire where you want to put an actor), but most of the time, you get along without pulling cables.

Anyway. You correctly identified parameters 7, 13 and 14. Param 13 = “Toggle” should do what you want. But since you say it doesn’t work, I don’t know of any other FGS configuration to allow for this behaviour. But you can implement it with a rule.
Possibly FHEM doesn’t easily allow for that kind of programming, maybe that’s why that guy in the example solved it that way.
Using openhab, you would simply implement a rule: on S1 being changed, toggle O2 (in addition to toggling O1, which is what FGS switches will do automatically if S1 changes).

I would agree with you that there might be situations where it would be preferrable to change the wiring of an existing installation. This would typically end in a certain effort doing much more than just changing the wiring but also redecorating the walls, etc… I would like to minimize the additional (avoidable) efforts.

A pre-configured behaviour of the FGS would have been much better in situations where the FGS is associacted to another device and to keep the system ‘simple’.

I’ve also issued a support request to Fibaro and I’m still waiting for an answer.

In the meanwhile I’ll investigate if it is acceptable to implement this in a couple of rules.

Thanks for your help so far. If I’m able to find the right configuration settings for the FGS I’ll reply them to this thread. They might also be interesting for others.

as see in the advanced user guide:
http://www.fibaro.com/sites/default/files/poradnik_instalatora/Advanced%20Users%20Guide%20ver%20102beta.pdf
look at page 16 there is shown a 4-way connection with a dimmer - this i do with the switch too and it’s work fine. 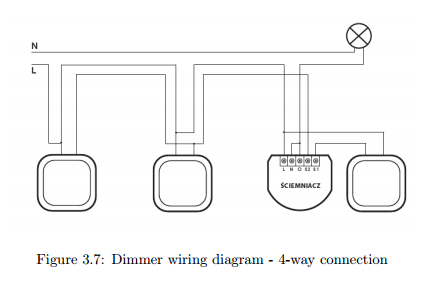 took some time and reviewed my original approach carefully. After that I would fully agree that there is a better soultion than originally planned. I’ll move the FGS to the end of the multiway-switching. I still can keep my toggle switches and will only have to make slight changes to the wiring. This will also make it unnecessary to implement any rules that simulate the multiway switching.

Thanks for pointing me in a different direction.