I’ve been using older versions of OH2 for a while for my ‘production’ system, and now looking into moving to the ‘karaf’ version of OH2.

The OH1.x WOL binding has already been verified to work with OH2, but it does not seem to be included in the online distribution of OH2.

Is there a specific reason why this is not included? If not, is there something I can/should do to get it included?

For now, I just put the bindings file in the addons folder, which works fine. It would be nice to have it available online as well, though.

Thanks for testing it, good to hear that it works!
No, there is no specific reason that it isn’t added yet, it just waited for the first person to try it out.

I have just described how to add bindings to the distro. If you are comfortable with Git, please be so kind and create an according PR!

thanks for your response!

I wasn’t aware of this procedure. As it used to be in the non-karaf version of the OH2-distribution, I thought it had somehow gotten lost along the way.

I’m happy to make a PR for this. Actually, at the same time, I’ve also noticed that the Astro and Networkhealth bindings seem to be missing. They both seem to work fine for me, so I’ll add PR’s for them as well.

I assume you’d like to see separate PR’s for each binding?

I’m happy to make a PR for this. Actually, at the same time, I’ve also noticed that the Astro and Networkhealth bindings seem to be missing. They both seem to work fine for me, so I’ll add PR’s for them as well.

These are bindings for which there are already 2.x versions available, therefore they are not available by default anymore.
I still have to document it, but you can still add them by configuring it in the Extension Management section in Configuration->Services in the Paper UI, see here: 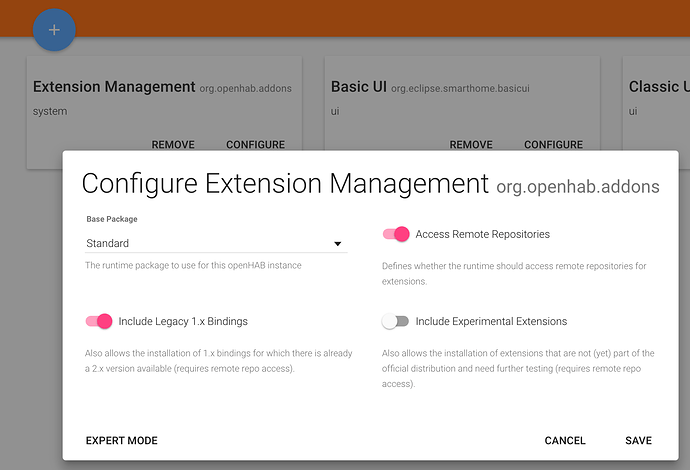 I’ve created the PR, and it seems to have been merged. Also, I can see it in the ‘offline’ distribution package.

However, I had expected to be able to install this version through the ‘online’ distribution as well…

From the OH2 console, I’ve issued the repo-refresh command, but the Wake-on-Lan binding still doesn’t show up in the list of features.

Am I expecting too much, and should I install a new version of OH2 first?

No, you are not expecting too much.
I just downloaded the latest online distro, saw the WOL binding listed there and also successfully installed it: 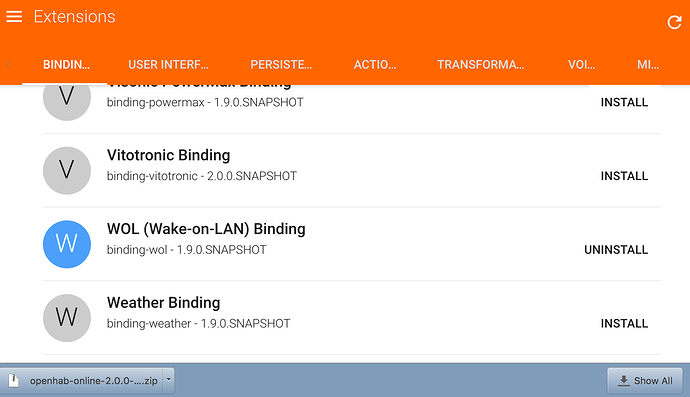 So what you’re saying, is that I should indeed download the latest OH2 release, and it won’t ‘automatically’ pick up changes in the repository from the currently installed OH2 version?

What I am saying is that it works with the latest build. There is no guarantee that you can use older distro snapshots to run latest addons and vice versa. Investigating problems that are due to such a mix are likely to be time consuming and not worth the effort.

hey guys, i know its old topic but im facing a problem in oh2 karaf version. i can find WakeOnLan binding from bindings and i can install it but i cant seem to find where can i configure it ?

It’s an older version 1.x binding, so you configure it to an Item (no Things, no Channels)

Btw, what do you consider commercial unfriendly in the EPL?