I have created a rule to wake me up in the morning.

Then the radio then starts at volume 10

after 45 minutes, both the light and the music turn off again (by then i’ve usually left the house)

However, I’m not sure if there is a more elegant solution to slowly dim the light up?

However, I’m not sure if there is a more elegant solution to slowly dim the light up?

The current code will block anything else from running until the dimming loop has finished. That may be what you want, though.

Have a look at the Blockly reference here to see an example with a timer that uses a reschedule block to restart the timer over and over until a certain condition has been reached (see the doorbell example).

of course you are right. reschedule did the trick 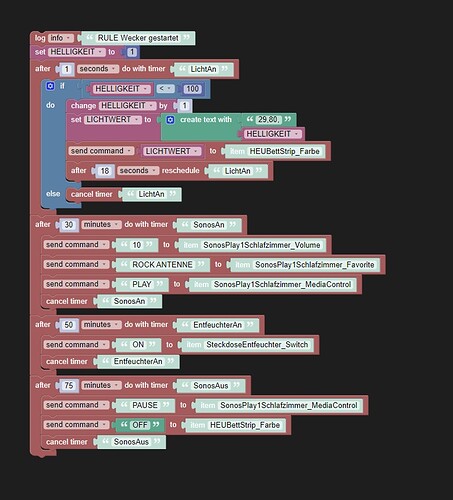