Wallmote Quad - Hardwiring The Power To Run With No Battery

I’m just putting this here on the absolute off chance that anyone else has some thoughts on the matter. Totally not asking with any entitlement to, or expection of, a reply.

So I have a non-working WallMote, and it’s been suggested that I power it directly via the USB, and bypass the battery altogether. Except I can’t seem to get it to take the power. (which was the issue in the first place)

I will be asking Aeotec directly, but it’s really something that they could rightly tell me to do one with.

I’m wondering if either of the capacitors near the power input are chuffed up which caused the issue in the first place. I have compared them to a working one, and nothing looks especially different there, the first line of numbers on the capacitor are the same ( " 107J " ) for C28 (the second image is the capacitor on the faulty wallmote): 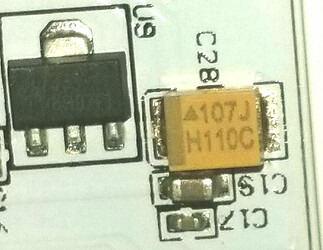 … and I’ve lost my images of the other one C31. Scratch that, I have one, but I can’t embed it because I’m still a new user. In C31 is another, smaller ( " 106C " ) capacitor:
IMAGE REMOVED
60F90
If I remember rightly, one of the capacitors looked a slightly different size on the working one, can’t be sure.

Also, these might not be capacitors and I’m an idiot.

The unit does warm around the micro-usb area when plugged in to a USB charger or PC socket, so there is current flowing to the board. I just don’t know how far it’s getting from there, or really what to check. I do have a multimeter, but it might not be precise enough to touch the right parts.

Just thought I’d come here to see if anyone could think of a half-decent next step.

Check for continuity on components near the usb socket. The failed component will get fairly hot.

((( after I StartPage “continuity”

Reckon I should try replacing that … that should be an adventure!

Maybe you should post pictures of the complete pcb so I can help better.

How much current is drawn when you connect usb?