Did you consider zwave? All in all, if it is a new house, I suppose you are not only controlling your downlights? Using a mesh solution might be more robust, especially if you are installing old fashioned switches for local control.

Ok, which z-wave dimmers are available that work with LED bulbs?

I use Qubino Flush dimmers (with a separate/standard face plate), but I guess there are others as well. The thing with LED’s is that if there’s a lot of them, apparently the starting current can be higher than anticipated, so if you are intending to drive a lot ol LED’s on the same dimmer, you will have to be careful.
There are of course also the possibility to go 0-10V to a external dimmer, but at a higher cost. It all depends on your set-up really…

With the Qubino above or with the fibaro dimmer 2 you can use any faceplate you want. These modules get inside the the wall switch box so that you can operate the lights either via home automation or simply with the switch connected to them
If this is about a low watt LED along with fibaro you may want to use this along with fibaro dimmer bypass that is used as a dummy load.

zwave is not considered cheap but is very stable and scalable mesh network. I run a lot of my home automation via zwave devices among other things

I have z-wave, purchased an adapter for my Pi3

I’ve ordered one to test with.

With the dummy load, are you not then using more electricity heating up the load? Then what was the point of using LED?

I really want a dimmer that’s fully LED capable. This will be for a new house, so everything will be LED.

there are some really nice white glass touch switches, but they all seem to use their own wi-fi and app.

You can make it work with MQTT and Tasmota firmware …

you are right it does consume but then again any dimmer module you will put (be it zwave / wifi etc) will also consume some energy if you want to control the lights remotely. the bypass consumes less than 1.4W according to docs so it is not that much (but it is not 0)

I have looked at these, but they are only on/off, no dim function

Could you link yours?

@ThomDietrich - Sorry, what do you mean?

What I think I’m looking for is a Wi-Fi 230v AC Dimmer module. That I can switch on/off and set a dim level. That supports maybe 150-250w, all the way from very low level dimmed to 100% brightness.

Works fine with openhab but definitely not “cheap”.

Those devices support a parallel wired switch which makes them independent from Openhab/the Bridge.

These are the sort of things I like, but no dim function.

These look like they may work, depends if they can be integrated to OpenHAB…
I do already have a Broadlink unit on order, which does look like it may control them. Assuming I can get the added functionality in OpenHAB for this unit.

That’s what we were talking about in the above comments

These T1 devices appear like successors of the Sonoff Touch. Nice! I was waiting for 2 channel Touch buttons. I can’t confirm it but you can expect them to be supported by the custom firmware Sonoff-Tasmota shortly.

Its the dimming bit that seems difficult to get…

I didnt know about this dimmer. ESP8266 inside.
Also, I never realised the SonOff Touch was reprogrammable as well, ESP8285 inside. That solves a lot of ‘problems’ I was pondering about… I do not see much difference between the Sonoff Touch and the Sonoff T1-1
Good to know, tnx

Great thread, I am like looking for the same thing so will see if anyone comes up with any ideas. I brought a sonoff t1 touch and flashed successfully with tasmota. Works great although I got the 2 gang and there is only a profile for 4 gang on tasmota so 2 channels are unused. Needs live and neutral as well though at the socket so can’t really use it with switched live (fine if new build and can put it in) and no dim function which is a shame. Think T1 is just new model of the touch but could be wrong.

Be nice if sonoff developed a dimmer able controller

Did you find a solution to this. I’m looking for the same thing, to dim some GU10 LED lamps. I have an existing wall mounted manual dimmer and want to put an inline dimmer that I can control from a wall mounted switch and from openHAB.

As you say, this seems a difficult task for the DIYer, but must be one of the most requested use cases here in the UK.

I’ve bought a Aeon (Aeotec) Nano Dimmer, but haven’t got around to fitting it yet (so can’t tell you how well it works) - but it should do the job, and doesn’t require a neutral wire.
(note: the different Nano Switch does require a neutral) 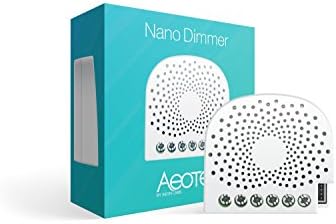 Nano Dimmer lets you convert any light dimmer switch into a Z-Wave Plus dimmer. You can control it, schedule it or automate it from your existing light switch or a Z-Wave gateway. Though 60% smaller t ...

PS: if the wall switch box doesn’t have enough depth for the nano dimmer behind the switch, you can buy expansion plates to rise the switch away from the wall a little.