I’m just getting to grips with OH.

I’ve flashed a SonOff unit and H801 unit with Tasmota. These are both cheap units that seem to work well.

This covers any circuits I need to switch on/off and control RGBW led strips.

I now need to control LED bulbs in GU10 holders, I’m looking for cheap and cheerful units for that. Any suggestions?

Additionally, any recommendations for smart light switches that can operate OpenHAB?

Thanks in advance for ideas and suggestions

I’m using this H801 RGBWW LED controller reprogrammed with the Sonoff-Tasmota firmware. In addition to the dimmer/controller, I use a 5m warm white LED strip and a 6 amp, 12 volt power supply. I used this setup in our kitchen for under cabinet lighting. We have been very pleased with it.

Do you do anything for led ceiling lights?

I want to use cheap led bulbs, but with the whole circuit controlled by OH and Alexa

Actually it was meant as joke because you are looking for CHEAP strips, BUT: 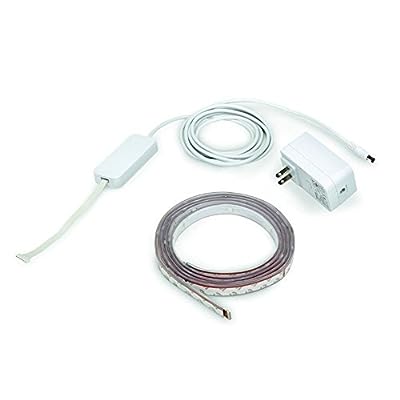 The Philips Hue LightStrip Plus Dimmable LED Smart Light is the most flexible light source imaginable. Shape the strip in nearly any form and attach it to any solid surface. Take control of your home ...

Thx for the suggestion, but again that is a strip. I already have some.

What I am looking for, is a wifi unit that can power say 10x5w GU10 LED bulbs, and can also dim them.

but again that is a strip.

I know, I tried to answer your question

Anyway, no, I don’t have any other recommendations, I’m just using HUE.
Good luck in finding something which fits your needs.

Thanks for the suggestion.

Again, this is smart bulbs.

I want to be able to simply purchase 5w LED dimmable GU10 bulbs (pack of 5 is £13) and then control them via OpenHAB and Alexa.

This would be for a new house, so wiring anything is easy.

What I think I’m looking for is a Wi-Fi 230v AC Dimmer module. That I can switch on/off and set a dim level. That supports maybe 150-250w, all the way from very low level dimmed to 100% brightness.

Did you consider zwave? All in all, if it is a new house, I suppose you are not only controlling your downlights? Using a mesh solution might be more robust, especially if you are installing old fashioned switches for local control.

Ok, which z-wave dimmers are available that work with LED bulbs?

I use Qubino Flush dimmers (with a separate/standard face plate), but I guess there are others as well. The thing with LED’s is that if there’s a lot of them, apparently the starting current can be higher than anticipated, so if you are intending to drive a lot ol LED’s on the same dimmer, you will have to be careful.
There are of course also the possibility to go 0-10V to a external dimmer, but at a higher cost. It all depends on your set-up really…

With the Qubino above or with the fibaro dimmer 2 you can use any faceplate you want. These modules get inside the the wall switch box so that you can operate the lights either via home automation or simply with the switch connected to them
If this is about a low watt LED along with fibaro you may want to use this along with fibaro dimmer bypass that is used as a dummy load.

zwave is not considered cheap but is very stable and scalable mesh network. I run a lot of my home automation via zwave devices among other things

I have z-wave, purchased an adapter for my Pi3

I’ve ordered one to test with.

With the dummy load, are you not then using more electricity heating up the load? Then what was the point of using LED?

I really want a dimmer that’s fully LED capable. This will be for a new house, so everything will be LED.

there are some really nice white glass touch switches, but they all seem to use their own wi-fi and app.

You can make it work with MQTT and Tasmota firmware …

you are right it does consume but then again any dimmer module you will put (be it zwave / wifi etc) will also consume some energy if you want to control the lights remotely. the bypass consumes less than 1.4W according to docs so it is not that much (but it is not 0)

I have looked at these, but they are only on/off, no dim function

Could you link yours?