What do people use for control of lights from bed

I’d love to get some input as to how people control their lights and ceiling fans, especially in bedrooms

I currently have z-wave switches at the entrance of all bedrooms which work well, my issue is once I or anyone else gets in bed what to use to turn lights off or on. I am using X10 controllers which give me on-off buttons for 8 devices. My controllers are slowly dying and I would like to replace them with newer technology but I can’t find anything as versatile and easy to use as the X10 controllers save a phone, but that is not very convenient in the middle of the night, oh and I also don’t like to talk to alexa or google to turn on a light.

Thank you for any suggestions
Carlos

I use Google Assistant, because it recognizes what I say even when I’m half-asleep and mumbling. I have it set up to turn off my light when I say “good night”. I get that this isn’t for everyone, though.

I recently purchased a GoControl WA00Z-1. If it’s available in your region, it might be a good option.

It has only two buttons, but in addition to momentary clicks, it can recognize when it’s being held and when it’s released (after being held). I also like that it only uses two CR2032 button batteries.

Another option is the Zooz ZEN34, which appears to have similar functionality to the GoControl in a smaller package. I have one Zooz lightswitch and it’s just okay. I don’t love the feel of the paddle. I often think I’ve pressed it hard enough, but then have to press it again (and I’ve had it for two years).

Thank you
I am looking for something a bit more versatile, something that will let me turn off the fan light when going to sleep and turn on my bedside lamp if I wake up in the middle of the night for example. I had seen the zen34, not the GoControl, I’ll keep these in mind.

By “more versatile”, do you mean “more buttons”?

You can essentially do four different commands (short and long clicks). Technically six, but the release events only work in conjunction with the hold events. Then you just have to have rules that fire off whatever commands you want when you press them, so you could have different reactions based on different conditions. Clicking one button could:

This still leaves you with three other untouched events.

The automation comes from you pre-programming what you want to happen in various scenarios, and then not having to think about it in the moment. You just press a button and openHAB will know what you want.

Of course, this only works if you always want the same thing to happen. If your behaviour is more random (which is common), it’s much harder to automate.

Yes, I mean more buttons.
It has to be simple to use, each button has to do one thing, if I tell my wife that a short press does something different than a long press the whole remote goes in the trash can

Thanks for all the suggestions.

Oh yeah, I totally get that. It’s like when headphones have a single button that you have to click multiple times for different functions. Just give me more buttons, please.

I forgot to mention the Aeotec Wallmote Quad, which has four buttons. I’m not a huge fan, because it’s symmetrical and you can’t tell which button is which when you pick it up. Also, for the price of one (where I am), you can get two of the GoControl or Zooz switches.

Philips also makes some HUE remote controllers, if you have (or are willing to add) a HUE hub.

I can recommend the switches from Senic/Gira. Thanks to energy harvesting, no batteries or power connection are required. You can simply put it anywhere and the buttons can be freely assigned with openHab I usually mix voice control, knx buttons and cheap wireless buttons deciding based on the situation what I want to use.
Why not use Z-Wave or ZigBee buttons? E.g. there are Tuya-Switches that have four buttons, each with the option to distinguish long, shot and double-press.
From Heatit you can get ZWave-Switches (Z-Push 8) that provide eight buttons.
And from Fibaro there is “The Button” which is a ZWave device that reacts on 1…6(?) buttons presses, styles like an emergency shutdown button.
IKEA has some nice battery operated ZigBee buttons as well, there are not that expensive.

I run the Tuya-Switch glued unter the dining table at my place (Voice control is not always the best when other people have a chat).
“The Button” sits beside my bed and switches lights or fan.
And the ZWave button are located at my terrace to operate the blinds plus lights.

Give it a try, the ZigBee devices are really cheap and can be placed anywhere.
But remember that you pick the controllers and switches that fit to your region - e.g. European ones do not work in the US due to different frequencies being supported.

The Friends of Hue buttons I don’t like, they are a bit expensive for the functionality provided, if you have an EnOcean gateway already running pure EnOcean buttons might be the better solution - if not it might be an option.
Links are only for illustrative purpose, neither get money for clicks nor do I recommend specific sources - prices differ a lot, google knows

Aeon Labs WallMote is something I invested in (Quad version), it provides 3 touch options, dimming options, and can be recharged with a micro USB connection.

I placed mine in the master bedroom, and while the top two are for things in that room, the bottom two take actions in other rooms.

Thanks to everyone that responded.
I will try the tuya zigbee buttons which seem quite inexpensive just to try them

I really hate talking to my home, so I added all kind of “user profiles” to trigger several items, like ligh groups. Each light group has its own expire timer (10min for garage, 30min for hallways, 1h for garden lights).

Home automation / smart home is, in my opinion, not talking to my home (still user actions required, but in the way “loving your life”). It should be automated and participate on my behavior.

@tjarco a perfect home isn’t fully automated as automation will not always determine and match your mood. Stuff like start and end of day must not be dictated by your home.
You need to be able to manually initiate scenes or routines for that.

I have zwave actuators on many of my lights. They allow for ‘overloading’ with a couple of (not many) functions on double and triple click. Yes you have to be very very careful not to confuse people which is what quickly happens when a triple-click on switch A calls a different function (different in nature) than a triple-click on switch B else does.
But you can come up with a consistent concept that other household members understand, too.
And no, you don’t want a (mobile) remote, it’s never where you expect it to be. The switch has to be in a fixed known location, especially the one in the bedroom.
Triple-click for me triggers the bed time scene, double-click provides low lighting in the hallway that goes off after some minutes. There’s multiple switches to do the same.

Yes, in the end it’s what you want and what’s comfortable. My brother in law uses his phone for every lamp, scene, radio, tv, etc. Another way of “automation”, but again is in my opinion not automation, it’s just moving the controls to another medium (just like talking to your house for enabling the lights).

But that’s my opinion and I just gave my thoughts on that.

I can recommend the switches from Senic/Gira. Thanks to energy harvesting, no batteries or power connection are required.

Second that. I would avoid the “Friends of Hue” versions though. You don’t want to be trying to program them through the Hue Hub as the response time is too slow. You can however get the same devices in the same package that use the Enocean protocol. Shove an Enocean stick in your Pi or whatever you use to run Openhab and you’re pretty much done. There is an Enocean binding.

As already described a two-gang switch is a surface mount anywhere on any flat surface, doesn’t need batteries, looks good (you can get some very smart - and expensive - surrounds) and gives you four buttons (up and down for each of the left and right switch) and with a little coding you can generate different responses for long or short presses.

I have these where I can’t get power for Z-wave switches (or don’t want to rip the walls apart - retrofitting automation to a 300 year old house is not fun). You can stick one to the wall on each side of your bed and both have remote control.

On the side of the beside tables I use two of the aqara mini buttons. Going over 2 years in a single battery.

On my wife’s side it’s a simple push once to switch lights on and off.

On my side using zigbee2mqtt I have single, double, triple, quadruple, hold, release.

Comes in handy if fall asleep and need to turn off the TV.

I also use this button to trigger my end of day routine.

I use a Philips Hue motion sensor and some rules. The sensor turns the lights on and reports the last time movement was detected. After X minutes of inactivity a rule turns off the lights. I have a rule running every 5 minutes checking all the sensors.
I also have a Hue dimmer switch, which I programmed to set the “sleep mode” after pressing a specific button for more than 2 seconds. It can be handled with a simple button on the MainUI.

When the sensors detect movement during the sleep mode, they turn the linked light(s) on in a dimmed (Philips Hue) state so the person moving can see but the ones sleeping are not interrupted.

I use dumb and cheap 433MHz switches (they stick onto something - you can get them in 1-3 button versions). They are dirt cheap and a single 433MHz to mqtt bridge (from Sonoff) handles them. Had this solution for a few years. Everyone in the family has one mounted next to the bed with their shortcuts programmed for them.

I will be switching these to Ikea Zigbee buttons soon though. They are pretty much as cheap, but better designed and zigbee… 433MHz has sometimes issue where a button press will get mangled and either not get through or trigger some other shortcut than what it is supposed to do. But that doesn’t happen that often, so not a huge problem.

Either way… my vote definetly goes for fixed buttons near the bed. The cheapest and easiest to use solution. And pretty much the most reliable and quiet as well.

I think about buying Tradfri stuff every time I’m in IKEA, but I haven’t gotten into Zigbee (and now I’m waiting for Matter/Thread).

I see they have a new remote control out that looks pretty nice. 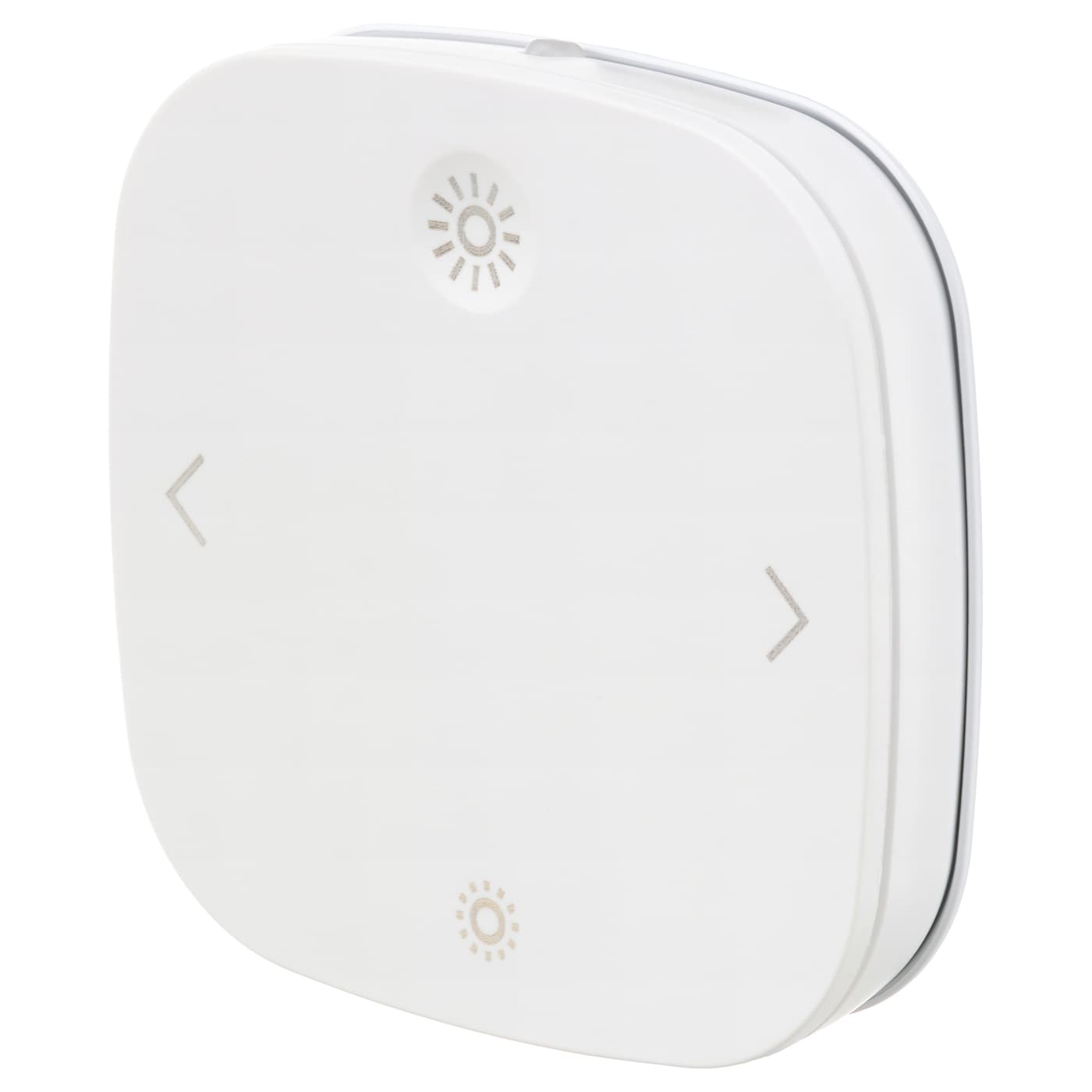 STYRBAR Remote control, white Now it´s easy for anyone to use smart lighting. STYRBAR remote control allows you to control multiple light sources with a click. Create atmosphere by dimming and adjusting colour and warmth of the lights.