i tried openhab, habopen, password, my loginpassword for my pc. none of them will work. can somebody help? 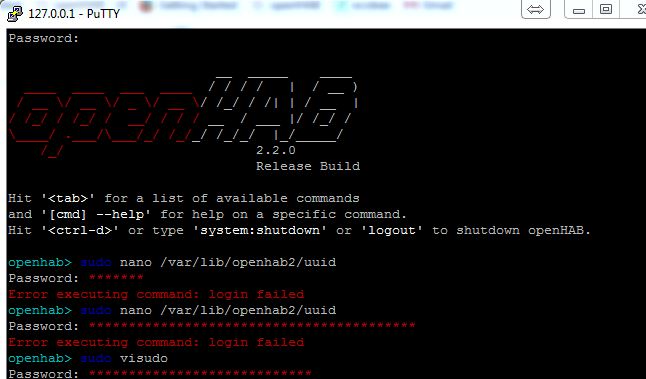 How do I setup OpenHAB 2 Remote Access on my Windows PC? I found these instructions and I finished till #7.
The Instructions - Click Here

How do I get the UUID and Secret?

Step 9 and 12 in the link you provided above tells you exactly where the uuid and secret are.

But I should add that this has nothing to do with the karaf console.

To run sudo commands and the like you need to ssh to the regular ssh port on the machine OH is running on.

Can you walk me through the setup so do I need a software to run a sudo command on a windows pc? Becuase OH is installed on a Windows PC.

Do you want to find uuid file and secret file of openhab on Windows PC ?
If yes, first, install openHAB Cloud Connector (misc-openhabcloud)

There is no such thing as sudo on a Windows machine.

How do I open it?

open with notepad (default on Windows)

How about telling on what System you are running OH and from what System you want to connect to OH.
In the Picture you posted in the second post you are connected to OH, more precise to the Karaf-console, this Connection is made via Putty to “127.0.0.1” in other words you were making a connnection to OH from the System on which OH is running.

If your OH would be running on a Linux based System, you could have used sudo commands in that Putty window BEFORE starting the Karaf-console! Or in the aboveposted Situation just Punch in “logout”!
However since your OH is installed on Windows that all does NOT work!

It’s online now! How do set it up on the iOS app?

I also have my OH on windows , How did you restart it? what did you used instead of ‘sudo’?
mine is showing offline.

I believe on Windows you need to do a bunch of extra configuration to get openHAB to start as a service, in which case you would restart it the same way you would any other Windows service which I think is done through the Administration Tools if I recall correctly. Otherwise, openHAB will close as soon as you close the cmd window you ran start.bat in so to restart it you need to open a new cmd window (or powershell) and run start.bat again.

I also have my OH on windows , How did you restart it? what did you used instead of ‘sudo’?

You read the fine documentation.

Thanks, I just did the logout and it did work. Thank you again