As a new user of OpenHAB I have the following configuration:
Raspberry Pi 4 Model B - 2GB
openHABian with openHAB 3

I’ve got some home automation running, like Xiaomi Wifi-devices and Philips Hue lights. This all works fine and does exactly what is to be expecting.

Because I want to expand my automation to my little brewery I’m looking for hardware where I can measure temperature, which has to be with a probe. I was expecting a lot of Zigbee-devices (because the normal temperature- / moisture-sensors are often Zigbee), but I’ve only found the TH10 & TH16 Sonoff-devices with a probe (DS18B20). There also seems to be an updated version: TH Origin with an upgraded cable-connection to the probe - DS18B20. These where all listed on the Sonoff-website.

So far, so good. However, I’ve looked into this flashing of the firmware and I’m not sure if this is something I - as a beginner - can do. I’ve seen that some products can be flashed OTA, but it looks like the TH10/16 or Orgin is not supported. Furthermore, can I be sure that not only the switch-function works, but also the sensory part.

I wonder if there is an option which involves less soldering / hardware and works more out of the box. It’s okay if this is a bit more expensive. Or am I looking at the wrong products?

Edit: Apparently I can only add two links in a post because I’m a new user, so I’ve deleted some links and described where I found the information.

The flashing of a sonoff, assuming a normal esp8266 one, is actually super simple.
Google “tasmotizer”, and you’ll need a little programmer doodat (it’s like 5 euros on AliExpress).
A bunch of leads to connect both and you’re off to the races.
Honestly I’d suggest you do this simply because you’ll learn a lot and afterwards you can use all other sensors and stuff that there’s out there.

I use a Shelly 1pm + temperuture addon + 3 temperature sensors. It is really easy to setup (plug and play) and fully compatible with openhab. The set price is about 35€.
You can measure 3 different temperatures, monitor the consumed power and also switch a device. I like it a lot.

Oh yeah the shelly’s already come with mqtt out of the box right?
That might be a better option.

I don’t use mqtt with the shelly, so idk.
But the openhab shelly binding works really well. It will discover the shelly and all channels are available.
I use all 3 temp channels. 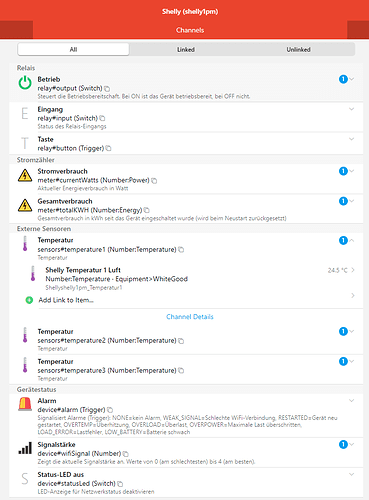 Thank you for your response. I do realize that if I learn how to flash these devices, a world of possibilities wil open ;-). But because I’m a real beginner with Linux, Raspberry Pi’s ánd OpenHAB-scripting I thought it was a good idea to have at least some plug-and-play hardware.

Haha so… you don’t need Linux at all for that

my computer is windows.
OpenHAB is on Linux yes, but flashing a sonoff device does not require Linux. Check for “tasmotizer” on YouTube and you’ll get it

Advice: sacrifice 4 euros and buy a sonoff basic. The old one. Not the r2. And follow the instructions to flash that one. All others are the same.

This looks really nice. It even uses the same temperature-probe as the Sonoff. I’ve ordered one from a local vendor and will try it out.

Haha, yes I found the “Tasmotizer” and realize it’s Windows. But I meant getting OpenHABian working on the Pi, connect with SSH to do stuff on it. I felt like a hero already to get that working

But I’ll try to flash one and learn more