I’m curious if anyone uses any of the serial controller channels to gain any insights into the operation of their Z-Wave network. If so, could you post what you do? 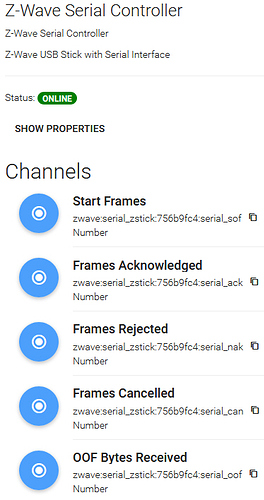 I use it to check the ack frames to make sure zwave is working. I get an alert if it stops acknowledging packets so that I can troubleshoot. Since I’ve moved to an RPI2 (from a virtualbox) I’ve had a lot less issues.

I get an alert if it stops acknowledging packets

So do you have a rule that runs periodically to detect if the number of ACKs hasn’t changed?

Yeah, here is my rule.

So I caused myself some pain here. I had these items being recorded to THREE persistence DB’s. MapDB, Mysql, and InFluxDB. I was killing myself each time My status lights updated on all my WS200+. There would be a storm of hundreds of zwave frames while my 30 Panels updated.

So be careful if you have an active zwave network, and do something stupid like record every zwave frame in a bunch of places.